Arrested at the RNC

Amy Goodman talks about being detained at the RNC

Amy Goodman talks about being detained at the RNC 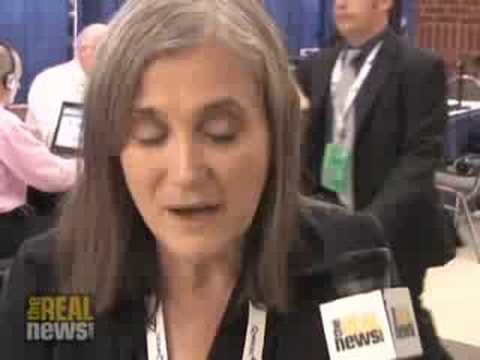 PEPE ESCOBAR, SENIOR ANALYST: Amy Goodman, you were arrested in the middle of a Republican convention almost seven years after 9/11. What really happened? And what does that tell you about America now?

AMY GOODMAN, JOURNALIST, DEMOCRACY NOW!: I mean, we were there on the first night at the Republican convention on the streets, in the suites, and on the convention floor. That’s our job—Democracy Now! breaking with convention. I’m interviewing delegates in the state that’s making news, Alaska, because of the vice presidential nominee, and I get a call on my cell phone that our producers at Jackson and Seventh here in St. Paul are being arrested. I tear out of the convention center, race down. Meanwhile what has happened is Nichole Salazar is filming. She’s one of our producers. They are filming the commotion which is right outside of our offices. The police are moving in in every direction. She’s in a parking lot. She can’t move back further than the parked cars behind her. The police move in, and she shouts, "I’m press! I’m press!" showing her press pass, holding her camera. They push her to the ground. They tell her to put her face on the ground. They put a boot on her back, and they start pulling her leg. Her face is bloodied. You hear her shouting; you hear her screaming. Sharif Abdel Kouddous, another of our producers, is right there. They throw him up against a wall. His arm is bloodied. He’s got dirt over his T-shirt. They kick him twice in the chest. And they are charged with felony P.C. riot, which is a felony probable-cause riot. That’s the point, as they’re being held, where I come running up from the convention center. I see a line of police, of riot police. I go up and I say, "I want to talk to your commanding officer. My producers are inside. I want them released." They pull me behind the police line, they forcibly pull my arms behind my back, put those very rigid plastic handcuffs on, and they force me to the ground, and they say, "You’re under arrest." This is unacceptable. I say, "I am clearly—I have a jacket on from the convention floor; I’ve got not only my regular credential but my top-security-clearance credential from the convention floor." And I say, "This is ridiculous. You know clearly that I’m a journalist." My jacket they’ve taken away, they’ve never given back. My credentials, Secret Service comes over—I was arrested by Minneapolis police, but Secret Service—and they rip it off of me.

ESCOBAR: No possibility of dialog.

GOODMAN: No possibility. They rip it off of me, so I no longer have my credential. Then I’m put in the police wagon with Nichole Salazar. They bring us to the jail. She’s put in jail. I’m put in the pens in the police garage. I say, "This is outrageous. You should not be arresting me." St. Paul police says, "You shut up. You shut up." I said, "I want your police badge. I want your name." They are obligated to give it. They wouldn’t. So this is an absolutely critical, profound issue. The press must be allowed to operate. The day before, on Saturday, we witnessed a preemptive raid on the I-Witness Video Collective. They were in a house. The police came in. They raided it—they had an AR-15. Police, FBI—not clear exactly who that was—came in with a pistol drawn. Our producer Elizabeth Press was there. She has her camera, afraid they’re going to mistake it for a gun. She puts it above her head. They are brought out in the backyard. They are all handcuffed. Ultimately they are not charged, but their work is interrupted, and they are a very effective video collective that documented what happened at the RNC in 2004, which has cost the police tens of millions if not hundreds of millions of dollars, because when you document, it really is a help to good cops. They don’t like the bad cops. They don’t want to be given a bad name. It is essential to have a free press. There’s a reason why our profession is the only one explicitly protected by the US Constitution—we’re supposed to be the check and balance on power. I talked to the police chief this morning, the St. OPaul police chief, Harrington. I said, "Are you dropping the charges against them?" And he said, "They are investigating." That is not enough. We need to know how the police see their role in ensuring that a free press can operate at the Republican National Convention, this national security event.

ESCOBAR: Is the US already a proto-fascist state?

GOODMAN: I just know what I have seen right here. It is not acceptable. We covered the Denver convention, but I’ve covered conventions now for 20 years, and they have to be held accountable.

ESCOBAR: Is the mainstream media holding them accountable?

GOODMAN: No. The mainstream media, when we were in Denver for two hours a day covering the convention at Democracy Now! at democracynow.org, people were calling: "Where are you? You couldn’t be in Denver. We’re not seeing any of this anywhere, the protests in the street, the pepper spraying." Here, though, we’re just on the second day of the convention, the Republican convention. Three hundred people have been arrested at this point. Not clear where it’s going to go from here. We need an honest press. When I said to the police chief this morning, "You tell us how the press is supposed to operate here"—he knows I’m a journalist, he knows very well who Democracy Now! is—he said, "Reporters are not having trouble if we’re embedding them in the police." Well, we don’t want to be embedded. We don’t want to be embedded. We believe we must operate independently, internationally, and give a voice to all of those people who are so often silenced. I mean, those who are opposed to war or the protests outside opposed to torture are not a fringe minority, not a silent majority, but the silenced majority, silenced by the corporate media.

ESCOBAR: So this is at least there’s a police state. There’s more police and riot police here than in Baghdad in Iraq.

GOODMAN: There are a lot of police here and a lot of authority at every single level, from the local level to the highest level. And when I was fingerprinted, when they were taking all of my information, it’s a grave concern. Exactly what database is this information is going into, even if eventually the charges are dropped, which I don’t know at this point? What databases are these going into? What does this mean?

Amy Goodman is the host and executive producer of Democracy Now!. She is co-author, with her brother David Goodman, of the book Static: Government Liars, Media Cheerleaders and the People Who Fight Back. The pair also co-wrote the national best-seller The Exception to the Rulers: Exposing Oily Politicians, War Profiteers, and the Media That Love…