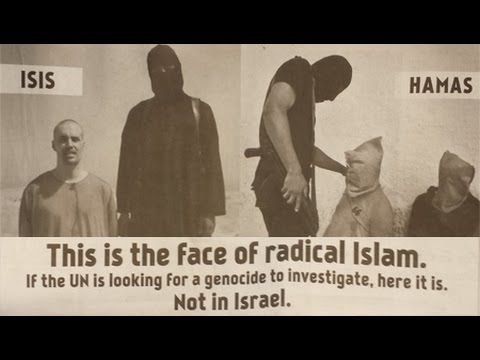 On Tuesday, The New York Times ran a full-page ad that puts photos of ISIS and Hamas side-by-side. An ISIS militant is standing next to the murdered journalist James Foley. The other photo shows Hamas next to hooded figures they purportedly executed for collaboration. The ad was funded by pro-Zionist rabbi Shmuley Boteach and goes on to say, quote, “If the UN is looking for genocide to investigate, here it is. Not in Israel”, and “Ban Ki-moon should focus on real genocides in the Middle East, stop persecuting Israel the region’s only democracy, and stop making suckers of the American taxpayer.”

Now joining us are two guests. We joined from Urbana, Illinois, by Robert Naiman. Robert is the policy director of Just Foreign Policy.

Joining us from the West Bank is Lia Tarachansky. Lia is the Middle East correspondent for The Real News Network and has been reporting on Israel and the occupied Palestinian territories for years.

So, Robert, let’s start with you. What do you make of this comparison between ISIS and Hamas?

The key distinction between Hamas and ISIS which most policy analysts would recognize is that whatever one may think of Hamas, it has demands that can be met, that can be addressed. It’s not irreconcilable, as the U.S. would say about al-Qaeda, which doesn’t have an intrinsic agenda of confrontation with the United States or killing Americans. That’s how ISIS is like al-Qaeda. In fact, arguably right now worse than al-Qaeda, a lot of people would say. Hamas, for example, again, whatever you think of Hamas, you know, what happened to the recent confrontation, Hamas made concrete demands like end the blockade of Gaza. That’s a concrete demand that could be met. In fact, many people, including me, would say that regardless of what we think of Hamas’s tactics, that’s a just demand. The blockade of Gaza should end regardless of Hamas. In fact, the Norwegian government says the same thing. So that is not a demand. That’s off the table. This is a key distinction between ISIS as we’re experiencing it today and Hamas as we know it today. Hamas is a political group that can be accommodated politically and diplomatically. ISIS is a group which apparently cannot be accommodated politically or diplomatically.

LIA TARACHANSKY, MIDDLE EAST CORRESPONDENT, TRNN: Sure. And I think that for that I need to go a little bit into the history. The discourse about the Palestinian resistance to Israel being tied to the occupation ended roughly round the signing of the Oslo agreements, when it was obvious that the reason that we were signing the Oslo agreements with the Palestinians is because we saw that as the step forward to ending Palestinian resistance. And it’s something logical. You know that if people are fighting for their freedom, it is if you give them their freedom that they will stop fighting.

But in 1996, the current prime minister, he was then running for office. He issued a book, released a book that basically said that the entire Arab world is one dangerous mass of terrorists and that sooner or later the U.S. will witness a huge terror attack which will help it understand that we are not fighting Palestinians because the Palestinians want freedom from the occupation, but that the Palestinians are a part of a big network of Islamists and Arabs all around the world that are just fighting the West for ideological reasons and for Islamic reasons. And this came out in 1996.

Fast-forward. He got elected. The Second Intifada started shortly after. And this is really the Netanyahu and ideology, which is, if you fight the Palestinians, if you have an enemy to fight at all times, you could actually wage war forever. And we’ve seen even with just this war that just happened, it first started in his speeches. He was saying that Israel is trying to regain quiet in the south. And then the war turned to the rockets–we are fighting the rockets. And then a couple of rockets fell close to the airport, causing international airlines to stop flying to Israel, and then all of a sudden the language changed to we’re not fighting rockets; we’re fighting tunnels. After the tunnels, now it’s we’re fighting Hamas and so on and so forth. And in the last arms conference I was at, I actually heard one of the general saying that if we don’t fight Hamas, if we don’t bring Hamas to its knees, we’re going to show the world that we’re weak, and ISIS is just at our door, just one country over, with Jordan between us and them, and if they know that we are weak, they will come, attacking us. And so from the beginning, from his very first term in the ’90s until today, Netanyahu has been using this language that has been adopted by all consequent politicians and by much of the parliament today, which is that we in Israel are fighting against this monolithic enemy, everyone is the enemy, and therefore we need unlimited support forever. Even under this current term that he’s serving, first we’re fighting Iran, then we were fighting the al-Qaeda in the desert, in the Sinai Desert, then we’re fighting Hamas, and so on and so forth.

But if you look behind the scenes, Iran has actually been fighting against ISIS. Hamas, which is not a monolithic organization by any means–and we’ve seen a demonstration of that so clearly with this war–Hamas is made up of a number of movements, about six movements that you can generalize about. And there’s a whole plethora of opinion about how to run the organization. And even if you look at the name Hamas in Arabic, it means the Islamic movement. So even though it’s a party, it’s a coalition if anything. And when Hamas took over in 2006–just to show how simply different they are–they could have easily instituted sharia law, but they never did. They’ve done some things that are similar to sharia law, but they never instituted sharia law. And so, clearly, their main aim at ruling is not Islam and the main reason why they’re fighting Israel is obviously not for Islamic reasons.

NOOR: So, Robert, as a journalist, do you think it was appropriate The New York Times even ran this ad? Some could call it hate speech.

NAIMAN: Well, I think it’s important for all of us to have a great deal of respect for the First Amendment. We’re seeing all the time [incompr.] for example, where I live, in Urbana, Steven Salaita was just fired or unhired by the University of Illinois for sharp criticism on Twitter of Israel’s war on Gaza. So I think that I’m not going to say–you know, somebody claims that Hamas is like ISIS, that’s a political idea, which I reject, but I’m not going to say that that person doesn’t have free speech rights or that The New York Times should suppress that speech. I would be more concerned about ensuring that The New York Times is open to the views of people who think that we should be pursuing a political and diplomatic solution to end the confrontation between Israel and Gaza [incompr.] by ending the Gaza blockade.

NOOR: And does The New York Times, in running this ad, does this at all reflect how they cover the Israeli-Palestine conflict?

NAIMAN: I think they would say not. And I would dispute it. They would say that this is a business decision with maybe some editorial oversight over what kind of pictures we’re going to put there. But I wouldn’t make that charge. I think there’s much more interesting things to do in terms of challenging The New York Times‘s coverage of the region then challenging them on this ad.

In particular, how is this going? We know, as I said earlier, this could be resolved. After all, the military confrontation between Israel and Hezbollah was resolved, and there’s been peace on the Israel-Lebanon border since 2006. We know, experts say, the UN says, other experts say that if the blockade of Gaza is not resolved, that’s just setting the seeds for another violent confrontation in the future.

So I think this is where our emphasis should be. Are we having a debate about what needs to happen in order not to have another war between Israel and Hamas in the future? Clearly, demonizing Hamas by Israel [incompr.] or anybody is not going to help us address that question [incompr.] to end the blockade of Gaza, since [incompr.] reason for violent [incompr.]

NOOR: Robert, could you just repeat that last part, where you talk about how this conflict could be resolved? We’re having some issues with the connection.

NAIMAN: Yeah. We know, those of us who read newspapers know, that the central cause of the recent military confrontation between Israel and Hamas was the Israeli-Egyptian economic blockade of 1.8 million Palestinians in Gaza. That can be resolved right now, this month, with diplomacy and politics, with a diplomat improvement that ends the blockade of Gaza and removes this is a source of violent conflict in the future. That should be the focus of our attention. Demonizing Hamas isn’t going to resolve the conflict when politics and diplomacy could if people would direct their intention to that.

NOOR: And, Lia, talk about the prevalence of the ideas like this in Israeli society and Israeli education.

TARACHANSKY: Absolutely. I mean, when I was a child, what we were talking about is ending the occupation so that we can have peace. Today, the education system has completely internalized this worldview. And when you ask people in their early 20s, people who have gone through a generation of this education, about why the Palestinians are fighting them, you’re not going to find a clear answer. In fact, most people don’t even understand that the reason the Palestinians are fighting them is because of the occupation and because of 60 years of this dispossession and displacement, which is why the annexation of 4,000 dunams–or 4,000 square kilometers–of land today as punishment by the government in the West Bank for the kidnapping and killing of the three teenagers in June, an incident that started this whole escalation and war, the government today announced that in punishment for that, they’re going to annex 4,000 square kilometers, a huge part of land just west of Bethlehem, which is just hugging the Green Line. But for Israelis, they don’t see the connection between that announcement and the entire war against the Palestinians, when it is very clear that Israel is using the current political fog to basically annex more land as punishment.

NOOR: Lia Tarachansky, thank you so much for joining us.

TARACHANSKY: Thanks so much for having me, Jaisal.

NOOR: Robert Naiman, thank you so much for joining us.

Lia Tarachansky is a journalist and filmmaker at Naretiv Productions. She is a former Israel/Palestine correspondent for The Real News Network, where she produced short, documentary-style reports exploring the context behind the news. She has directed several documentaries that tackle different aspects of social justice struggles in Israel/Palestine.