As preliminary Iran Nuke deal is finalized and set to go into effect next Monday, the American Israel Public Affairs Committee(AIPAC) is pushing for Congress to pass new sanctions against Iran which would violate and likely nullify the historic agreement

As preliminary Iran Nuke deal is finalized and set to go into effect next Monday, the American Israel Public Affairs Committee(AIPAC) is pushing for Congress to pass new sanctions against Iran which would violate and likely nullify the historic agreement 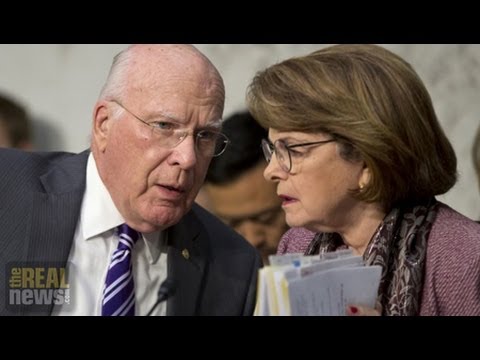 JAISAL NOOR, TRNN PRODUCER: This is The Real News, and I’m Jaisal Noor in Baltimore.

On Sunday, six major world powers and Iran completed a deal that will ease sanctions on Iran in exchange for the halting of much of the country’s nuclear program. It goes into effect next Monday.

Meanwhile, the White House is clashing with Congress over attempts to pass additional sanctions against Iran. A statement released by the National Security Council on behalf of the White House on January 9 said, quote:

“If Congress passes this bill, it will be proactively taking an action that will make diplomacy less likely to succeed. The American people have been clear that they prefer a peaceful resolution to this issue. If certain members of Congress want the United States to take military action, they should be up front with the American public and say so.”

Now joining us to discuss this is Robert Naiman. Robert is the policy director at Just Foreign Policy. His recent piece in the Huffington Post is titled “Lobbying for Iran War, AIPAC’s Napkin Is Half-Empty”.

NOOR: So, Robert, why is Barack Obama’s own party, the Democrats in the Senate, why are they trying to stab him in the back on this? And who are the players that are behind this push in the Senate and in Congress? We know AIPAC and the Saudis were two of the main forces against this deal ever happening.

Other Democrats so far have for the most part neither spoken out against the bill, nor have they signed on to the bill. Bernie Sanders publicly criticized the bill, said he wouldn’t support it. Elizabeth Warren, as far as I know, hasn’t spoken out on the bill, per se, but in a hearing of the Senate Banking Committee she strongly attacked the logic of the bill.

So that’s where we stand is some Democrats in favor, some against, and the majority so far are not speaking out publicly.

Of course, the key Senate Democrat here is Majority Leader Harry Reid, who said that he has no plans to bring this bill to the floor. And there’s a bit of a spin game going on by AIPAC and its friends to act like, you know, it’s the end of history if a majority of Senate senators cosponsor the bill and Harry Reid doesn’t bring it to a vote.

Of course, that’s not the logic that Republicans use in the House, you know, like with the Senate’s immigration reform bill never considered by the House because a majority of House Republicans don’t support it. So the majority of Senate Democrats don’t support this bill. There’s no reason for a Harry Reid to bring it to a vote. And this could never happen, so long as Harry Reid doesn’t bring this bill to a vote.

NOOR: And so supporters of this bill, they argue that it’s necessary to ensure Iran complies with this temporary deal, which goes into effect next Monday. What’s your response?

NAIMAN: Well, they also claim that they are actually trying to help President Obama put pressure on Iran. The Obama administration says, no, you’re not, you’re not helping us. We don’t want you to do this. How can you say you’re helping us when you’re doing something that we told you not to do?

The fact of the matter is that the interim nuclear deal says the United States and its partners in the deal agree that they would not do new sanctions. So, first of all, this is a new sanctions bill, and so it clearly violates the basic idea of the deal, which is no new sanctions during the interim period, where they’re supposed to be negotiating the final deal.

Secondly, the Menendez bill, the AIPAC-Menendez bill, tries to tie the hands of the administration on a final agreement. And here’s where, you know, you really see the hand of the Israeli government and AIPAC. [incompr.] saying that there can be no enrichment of uranium in Iran in a final deal; Iran’s nuclear infrastructure has to be totally dismantled.

Of course, that’s a nonstarter. No serious person thinks that the United States can get a deal like that through diplomacy. The United States would have to invade and occupy Iran, replace the Iranian government with an unpopular government that doesn’t respond to Iranian public opinion in order to get such a deal. So that is complete nonstarter.

So the supporters of this bill are being totally deceitful in pretending that their bill has anything to do with supporting diplomacy. It’s totally the opposite. It’s an attempt to blow up diplomacy. There’s no reason for new sanctions now. The new sanctions now are 180 degrees opposite to the idea of the interim nuclear deal and the attempt to get a comprehensive deal.

NOOR: Robert Naiman, thank you so much for joining us.