NSA whistleblower Kirk Wiebe & former CIA analyst Ray McGovern point to the brashness of intelligence officials who went on the record to threaten Snowden's life, reflecting a culture of disregard for the Constitution and due process

NSA whistleblower Kirk Wiebe & former CIA analyst Ray McGovern point to the brashness of intelligence officials who went on the record to threaten Snowden's life, reflecting a culture of disregard for the Constitution and due process 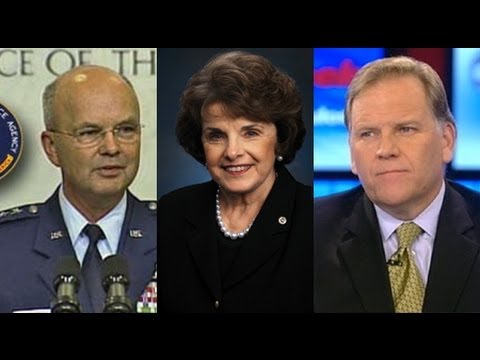 NSA whistleblower Edward Snowden is being accused of being a Russian spy by Republican Congressman Mike Rogers. It should be noted Rogers is also the chairman of the House Intelligence Committee.

This is what Rogers said on Meet the Press last Sunday.

DESVARIEUX: Now there are even threats on Snowden’s life from the intelligence community:

“One Army intelligence officer even offered BuzzFeed a chillingly detailed fantasy” of what it would be like to kill Edward Snowden. He had this to say:

“I think if we had the chance, we would end it very quickly”. “Just casually walking on the streets of Moscow, coming back from buying his groceries. Going back to his flat and he is casually poked by a passerby. He thinks nothing of it at the time starts to feel a little woozy and thinks it’s a parasite from the local water. He goes home very innocently and next thing you know he dies in the shower.”

We have Ray McGovern. He’s a retired CIA officer. He was also employed under seven U.S. presidents for over 27 years, presenting the morning intelligence briefings at the White House under presidents Ronald Reagan and George H. W. Bush.

We also have joining us Kirk Wiebe. He is a former NSA senior intelligence analyst and an NSA whistleblower who worked with the NSA for more than 32 years.

DESVARIEUX: So, Ray, let’s start off with you. I know that you’ve actually met Edward Snowden and you’ve talked about these threats against his life. What did he have to say to you?

MCGOVERN: Well, this was not the first time that Mike Rogers made this kind of threat. The only thing I think of is, as Joe McCarthy, when finally, finally somebody stood up to him and said, have you finally no shame? And I’d like to address that question to Mike Rogers.

What happened earlier, actually, just a few days before we met Ed Snowden on 9 October, that is, the three whistleblowers and I, at an open meeting run by The Washington Post, General Hayden, who had headed up the NSA for five years, from ’99 to 2005, and Mike Rogers were there, and Hayden said, you know, I understand that Ed Snowden’s on some kind of a list, a civil liberties list; I know what kind of list I’d like to put him on, broadly hinting that he should be put on the kill list. Mike Rogers piped up and said, yeah, yeah, I can help you out on that.

Now, mind you, this was not a mafia meeting. Right? This is [white-collar] criminals. Okay? White-collar criminals.

Now, I asked Ed. I said, Ed, did you know about this? And he winced and he looked at me. He said, Ray, you know, understandably, I follow these things very closely. Wow. You know?

Well, now we’ve got these same white-collar criminals, without any evidence at all, accusing Ed Snowden of being a Russian or maybe a Chinese–he’s a spy of some kind. Give me a break. These people should be held to account for these scurrilous charges, because what they give rise to are these other people that you referred to; the ones that want to stick a needle in him so he dies in the shower are the ones that want to put a bullet in his head the same way they did to Osama bin Laden.

DESVARIEUX: And, Kirk, you yourself blew the whistle on the NSA and were heavily retaliated against. Can you talk about how Congressman Rogers’ comments, as well as that quote that I recited earlier, fit with this retaliation against Snowden?

WIEBE: Jessica, sometimes I wonder what country I live in. When I grew up, my younger adult years and so forth, even working with a once-proud NSA, there’s one thing that stood tall, and it was our dedication to the Constitution of the United States, not just some of the parts, all of the parts, and especially those parts we find in the Bill of Rights–the right to freedom, free speech, privacy, a fair trial, etc.

When I see government leaders, people in powerful positions of influence speak as judge, jury, and executioner, it truly chills me. It’s foreign to me. We used to spy on countries that thought like that because they were a threat to our very form of government, and here we have people in our own government speaking like their agents. It is indeed frightening.

DESVARIEUX: And Snowden himself, I mean, he said that he was–someone asked him during that Twitter Q&A that happened on Thursday whether or not he was afraid for his life, and he had this to say. He said, quote:

“It’s concerning, to me, but primarily for reasons you might not expect.

“That current, serving officials of our government are so comfortable in their authorities that they’re willing to tell reporters on the record that they think the due process protections of the 5th Amendment of our Constitution are outdated concepts. These are the same officials telling us to trust that they’ll honor the 4th and 1st Amendments. This should bother all of us.”

Ray, what’s your take on all of this? Do you feel at this point–of course it bothers you, but with these leaks, does today’s news really vindicate Snowden? I know I asked you this before, but can you elaborate even further?

MCGOVERN: Well, it does indeed. I mean, this is an independent panel, finally, and they have great experience, and they’re pronouncing on this, and they’re saying that the Fourth Amendment was violated.

But what Ed Snowden–and, you know, James Madison or George Mason couldn’t have done any better in pointing out what the dangers are here. The Fifth Amendment–that’s what these people are violating the willy-nilly. And that says, “No person shall … be deprived of life, liberty, or property, without due process of law”.

Now, it’s no wonder that Rogers and Dianne Feinstein and Michael Hayden feel free to make these remarks, because the president himself has made these remarks. The president himself pretends to have the power to kill American citizens without trial, without judgment, on his own power. Now, he’s done four those already. One was the 16-year-old son of Anwar Awlaki. So, if the president says he’s above the law and he doesn’t have to abide by the Fifth Amendment, that creates a lawlessness where thugs–and I use the term advisedly–thugs like the white-collar criminals Rogers, Hayden, and Dianne Feinstein can flourish and have immunity for saying outrageous things.

DESVARIEUX: Alright. Kirk, I want to ask you this question, because you find a lot of people that say, you know, Snowden shouldn’t have broken the law by leaking these documents. I know you’re a whistleblower yourself. Did you feel like Edward Snowden had any other options, really?

WIEBE: No, Jessica. He had absolutely none. Anyone that promulgates the notion that there are good paths available–there aren’t any. In fact, if you look at the closest thing to a law governing whistleblowing in the United States, the Whistleblower Protection Act, it specifically excludes workers in the United States intelligence community, any of the agencies that make up our intelligence community. None of those tens and over 100,000 people have any whistleblower rights whatsoever.

MCGOVERN: The president of the United States said solemnly before the press corps that Ed Snowden had the protection of the Whistleblower Protection Act that the president signed just a few months ago. Is the president lying?

DESVARIEUX: That’s a good question. Is the president lying, Kirk?

WIEBE: Yeah, it was never put into law. It was a policy guidance, if you will, nicely stated, but no action.

MCGOVERN: [Is it] conceivable that the president didn’t know that when he misspoke? I don’t think so. That’s what we’re dealing with, dishonesty at the highest level. And I would suggest that all my progressive friends need to acknowledge, need to see this for what it is and act before it’s too late.

DESVARIEUX: Okay. Well, thank you both, gentlemen, for joining us.

WIEBE: Our pleasure. Thank you.

Ray McGovern is a retired CIA officer and was employed under seven US presidents for over 27 years, presenting the morning intelligence briefings at the White House under Presidents Ronald Reagan and George H.W. Bush.