The Europeans tried to restart the process for implementing the deal because they believe Clinton is likely to send weapons to the Kiev government if she becomes the next president, says former CIA analyst Ray McGovern

The Europeans tried to restart the process for implementing the deal because they believe Clinton is likely to send weapons to the Kiev government if she becomes the next president, says former CIA analyst Ray McGovern 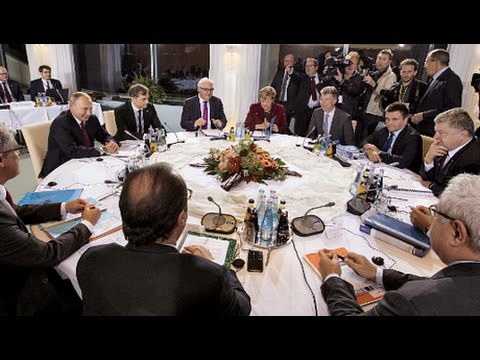 SHARMINI PERIES: Welcome to the Real News. I’m Sharmini Peries coming to you from Baltimore.

Amid shouting protestors outside a meeting of the leaders of Germany, Russia, France, and Ukraine took place on Wednesday in Berlin. They attempted to restart negotiations over Ukraine. Ukraine’s President Petro Poroshenko said a roadmap toward a ceasefire had been agreed upon and would be adopted by the end of November. The issues at stake in the roadmap include Ukraine’s control of its boarders with Russia, and Ukraine’s ongoing responses to pro-Russian separatists and passing laws for local elections in disputed territory. Though France and Germany helped to broker this so called Minsk agreement in 2015, to end large scale conflicts between Ukrainian forces and the separatists, the fighting has continued. Nearly 10,000 people have died in the conflict since it began in April of 2014.

Joining us now to speak about the renewed peace talks and what obstacles still lined the way of the roadmap to complete a ceasefire is Ray McGovern. Ray McGovern leads a speaking to truth to power section of Tell the World, a publishing arm of Ecuminical Church of the Savior of inner city Washington. He’s a retired CIA officer and was employed under 7 US presidents for over 27 years. He presented the morning intelligence briefings at the White House under President Ronald Reagan and George H.W. Bush. Ray, it’s so good to have you back after a while.

PERIES: So Ray you were recently in the region so give us some context as to whether you think this four-way meeting in Berlin is a sign that’s positive in terms of the conflict and deescalating it to begin with.

MCGOVERN: Well I wish I could give you good new Sharmini but I cannot in good conscious. Nothing happened. The only thing about these negotiations is that the United States is excluded. This is called the Normandy four. The Minsk Agreement and it’s the Russians, the French, the British, and of course the Ukrainians. Now the Russians and the French and the British would like to tamp down the violence in Ukraine. They’d like to end this feckless slaughter of people in the eastern provinces. But it all depends on number 1 Poroshenko, the head of Ukraine and number 2 whether he’s his own man.

Now subhead number 2, he’s not his own man. The US has him on strings and subhead number B if you will, even if he said to his forces who are led to a large degree by proto-fascists, even if he said, knock it off, stop the violence in the eastern part of Ukraine, there’s no guarantee they would do it. So what’s necessary here?

Well what Minsk agreed upon was a ceasefire and also a degree of regional autonomy for the people in Luhansk and the other areas back there. What was supposed to happen was that the parliament in Kiev was supposed to rearrange the law and allow them to have elections and agree a regional autonomy. The last thing I will say on this is simply that by calling them pro-Russian separatists, labels really matter. They’re not pro-Russian separatists, they’re anti-coup federalist.

What I mean by that, well are they pro-Russian? Well to the degree that they rely on Russia, they’re of Russian stock, yes they’re pro-Russian. But that’s not the interesting aspect of this. The most interesting thing is that they resisted the coup in Kiev that the United States and the western powers mounted on the 22nd of February 2014. They saw that that coup was led largely by these proto-fascists and they didn’t want any part of it.

First thing the coup leaders said, we’re going to eliminate Russian as the official language. Second thing we might join NATO. The separatists, so to speak, revolted against that and said not in our neighborhood. Now are they separatists in the sense that they’d like to separate and join Russia? Forget about that. Putin made it very clear from the very beginning, we’re not going to have you guys. You work it out yourselves. We’ll support you. To the degree that they needed food and other supplies has somewhat been [inaud.]. The Russians have supported these regionalists.

So unless the United States says to Poroshenko, look it’s time for you to cooperate here, it’s time for you to live up to your part of the agreement and get the government to recognize these regional aspirations. Unless that happens and unless Poroshenko feels strong enough to tell his proto-fascists, look the game is over, we’re going to do a little peace rather than war, nothing’s going to happen. So what’s the impotence for this meeting? The US election.

Now when Hillary Clinton comes in and the people that she’s brining with her, they’ve openly favored giving arms, offense arms to Ukraine. They’ve openly favored doing no fly zones in Syria. These are acts of war. Or at least the latter is. The Russians, in the interim between now and not the election but between now and when Hillary Clinton if she does take power on the 20th of January, they’re going to fix things so that if they appear or they will be in the strongest possible position, both in Syria and in Ukraine. The Europeans to their credit are worried about that so they would like to do the political process again and give it another try.

It’s doomed as I say unless the US, now Barack Obama is who I’m talking about, and Poroshenko decide to stop what they’ve been doing and honor what they promised to do in the original Minsk Accords.

PERIES: Now Ray you said that Poroshenko was on Washington’s strings so to speak. I’m assuming you are saying here that he’s more or less a puppet of Washington. What did you mean by that and elaborate on how Poroshenko is being controlled by Washington?

MCGOVERN: Well he’s extremely dependent on economic support from the IMF which the US pretty much controls. The countries are shambles. He needs all the help that he can get from the United States and the people who are running our policy toward Ukraine see more merit in keeping the violence going, why? Because the Russians will feel kind of nervous about what happens on this southern border. Doesn’t make a lot of sense to people in America but that doesn’t matter because people in America are not informed on these things. They are incredibly malnourished and what’s going on in places like Ukraine and Syria.

One last word on Ukraine. Sometimes the most palpable evidence of what happened comes when the post negotiations interviews, the press conferences, I watched Merkel and Hollande the Chancellor of Germany and the President of France, they were literally down in the mouth. They were trying to put lipstick on a pig. Nothing happened and to see them circumlocute around the fact that nothing happened was really painful. I understood all of what Merkel said, most of what Hollande said and it was just a kind of pitiable spectacle. I’m not surprised that Putin decided not to participate in that charade.

PERIES: You were just in the region. You were on a mission with 20 other people. Give us a sense of what you observed, where you went, what people are saying.

MCGOVERN: Well we talked with everyday Russians and also some entrepreneurs, some teachers, some nurses. So we were in Crimea. We were the first US delegation in Crimea even though we had no official status and we were welcomed. It was just a big deal for them. One of our colleagues arranged to have a swim for friendship in the Black Sea. It went over wonderfully in the local press. We talked to people in Krasnodar, in southern Russia. We talked to people in St. Petersburg, Moscow of course. It was a very refreshing two weeks, and of course the Russians turned out to be people like us who’d really like peace rather than war and who really can’t quite understand why their president who has an 82% approval rating, why he is made out to be the devil incarnate in the US press. They have suspicions about that. They do worry about that, what that means.

PERIES: Alright Ray. I thank you so much for joining us and hope to have you back sooner than later.

Raymon McGovern began his 27-year service as a CIA analyst under President Kennedy, quickly becoming Chief of the Soviet Foreign Policy Branch. Under President Reagan, he conducted one-on-one morning briefings of the most senior White House, State Department, and Defense officials, based on that day’s President’s Daily Brief. When the flimsiness of the intelligence being…