The Independent Workers Union of Great Britain launched a landmark legal case to bring collective bargaining rights to outsourced workers at the University of London. If they win, the case will set a historic precedent that could aid zero-hours and precarious workers all around the country

The Independent Workers Union of Great Britain launched a landmark legal case to bring collective bargaining rights to outsourced workers at the University of London. If they win, the case will set a historic precedent that could aid zero-hours and precarious workers all around the country 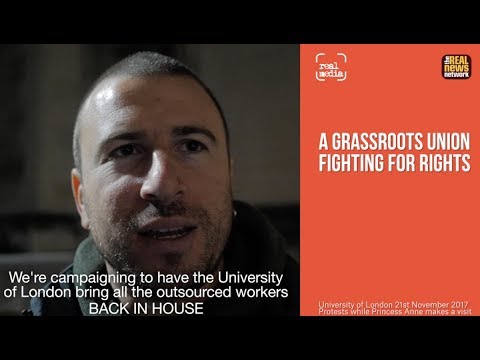 JASON MOYER-LEE: We are campaigning to have the University of London bring all of the outsourced workers back in house and put them on the same terms and conditions that direct employees have.

HENRY CHANGO LOPEZ: Cleaners, porters, security, caterers, maintenance … we are the biggest union on campus in a place that before none of the outsourced workers were unionized.

JASON MOYER-LEE: When we started organizing, the cleaners were earning just about the minimum wage. They didn’t have any pensions. They had statutory sick pay and statutory minimum for holidays.

HENRY CHANGO LOPEZ: Most of the workers are scared of coming out and going on strike and coming to protests. But when they see like social organizations, social movements, students, that get together, they’re more willing …

SHEN: The McDonald’s strike, and PictureHouse, and every strink that’s going on at the moment, these workers are standing up and saying that now is the time.

CROWD: Shame on you!

JASON MOYER-LEE: It’s important to recognize that some of the big unions are doing things, but there’s not nearly enough of it. We were driven out of Unison, and once we left, we did a lot better.

CHRISTINA PAINE: We have no sick pay. We have no holiday pay either. And we try to get these basic rights as well so solidarity to everyone.

HENRY CHANGO LOPEZ: Every employer that comes to take over the contract tries to introduce zero-hours contracts, tries to change the hours.

MAGS DEWHURST: Capitalism is out of control right now in London 2017. It is up to us to sort it out and bring justice to the workers and equality for everyone.

April 8, 2019
Sign Up for Our Newsletter
Help Us Make Real News!