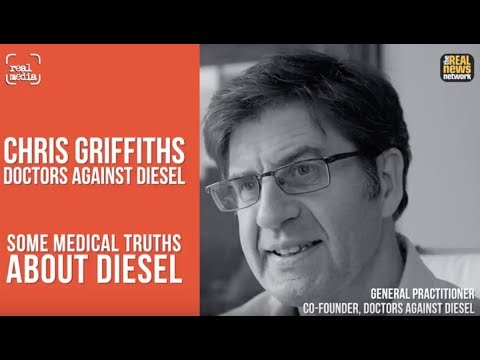 CHRIS GRIFFITHS: I would say it’s an emergency. Clearly there are lots of things that would qualify as emergencies. The reason that I say that this is an emergency is that it seems to me that there’s a significant risk to public health, to population health. There’s very strong evidence that poor air quality damages health. This damage can occur across the life course from babies in wombs before birth through childhood, adolescence, into adulthood and into old age. It’s clear to me that the risks are not being taken seriously. An important element of this is adverse effects on children’s growth, the increased risk that they face of developing illnesses, particularly asthma, wheezy disorders and the effect on lung growth.

The way that we did this study was to visit primary schools in East London and we measured, made detailed measurements of children’s lung capacity, eight to nine year old children. Each year, we took a new sample of children and so we compared the lung capacity of those children as they spent time in the air quality of their schools, and the roads and their homes.

Has it had an impact? I think it has had an impact. The final results of that study are being published at the moment, but we published interim results as we went along. I think the findings that we had, which were that the children that were living in the areas with the worst air quality had restrictions in lung growth. This was a finding that corroborated research that had been done elsewhere in the world, so California, big studies over the last 10, 15 years, Boston in the United States. A number of studies in Europe had also studied this potential adverse effect on lung growth.

What we found, in a sense wasn’t anything new; that traffic emissions could stunt the growth of children’s lungs. It was important that we found it in London because the findings from our study that we were finding this stunting of children’s lung growth really did get some traction, particularly with Mayor Sadiq Khan because this is something that he repeatedly refers to in his plans and comments around air pollution and his plans for the new ultra low emission zone in London.

In 2008 when London’s first low emission zone was implemented, we set out to see where we could detect a benefit of improving air quality through this low emission zone implementation. What we found was that the impact on air quality was not as big as was predicted. Overall, one would say that the impacts of that low emission zone was a disappointment. What’s curious and again, important is that the main agents that we’re worried about, in terms of these adverse health effects, are pollutants from internal combustion engines, particularly diesel vehicles and what comes out of a diesel vehicle and the exhaust is an entirely new agent; not something that has been researched before. These city particulate elements that come out in exhaust. There’s, to date, very little research until recently; because these particles didn’t exist, because these legends weren’t used.

I think it’s outrageous for car manufacturers to knowingly deceive the public about the emissions of their vehicles when car manufacturers absolutely must know the scientific literature on adverse effects of vehicle emissions is clearly scandalous. I mean it equates with the tobacco industry and the content that they have for the health of the people that they promote cigarettes to. The fact that these toxic emissions damage children’s health seems to me to make it even more outrageous.

I think that the problem continues to exist in the sense that even though this scandal is being exposed, there is still the problem of the emissions data from cars not being a realistic reflection of their real life on the road traffic emissions. We can have low emission zones; the entry into which and the payment around which depends on a vehicle’s categorization in terms of its emissions from its exhaust pipe. Unless our testing of vehicle emissions is improved and as long as we continue to rely on manufacturers’ data about what they claim cars are emitting, I don’t think that we’ll have the right handle on controlling emissions.

Doctors Against Diesel is a group that was founded by a colleague of mine and myself in collaboration with Greenpeace. My colleague is Jonathan Grigg. He’s a professor of child health where we both work at Barts and the London Medical School in East London. Jonathan’s main focus of his work is adverse effects of the environment on children’s health. It’s a curious thing to move from being a researcher into the field of trying to influence policy through activism; but I think it’s important for all the reasons that we’ve just discussed because here is a health problem. The means to address that health problem is clear. It seems to be important to make every effort to take advantage of every effort, to make sure that the messages around adverse effects of air pollution are made at every opportunity because progress depends very much on public opinion.

If we think about the way that traffic pollution, poor air quality was discussed in the public consciousness, the media, even five years ago, it was completely different to how it is now. There’s a huge increase in public consciousness about air quality. The concern amongst mothers for the health of their children, particularly in London, I think is extraordinary. They’re a very vocal group. There are big concerns about poor air quality around schools and nurseries.

I think that Doctors Against Diesel has an important role. It’s not simply about doctors. It’s an organization for health professionals generally. I think that medical researchers, health professionals, have some extra credibility. That’s not the only perspective, clearly mothers of young children have huge credibility when it’s in relation to protecting health. I think it’s Doctors Against Diesel has a particular, important lobbying perspective.