Talk Fracking' founder, Joe Corre, talks about challenging a wide-ranging legal injunction brought by the huge chemical company, Ineos, in order to prevent protest and comment on their fracking activities across England

Talk Fracking' founder, Joe Corre, talks about challenging a wide-ranging legal injunction brought by the huge chemical company, Ineos, in order to prevent protest and comment on their fracking activities across England 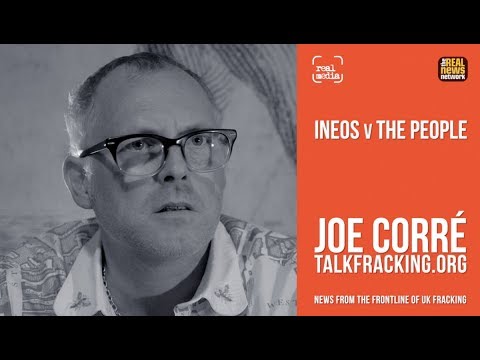 JOE CORRÉ: At the end of August, beginning of September, we heard about this injunction that was in place on these various sites that INEOS has licenses to frack on. There was no activity there up until they point. They started putting up notices and posters, which was the first time some of these local people had found out that they were about to be fracked. It was very bullying language, saying something along the lines of if you want to find out any of the terms of this injunction, or you may want to challenge it, you will be liable for all of our legal costs. The injunction was not available, just a notice about the injunction being in place. They had obtained that injunction originally at a secret court hearing.

I had to provide my ID, and my name and address to their lawyers, and immediately … I did that just to request the copy of the injunction. They put me down as a defendant on it. The injunction itself is addressed to persons unknown. That also is very problematic because what this injunction seeks to do is effectively buy another layer of law on top of the law that we already have that covers use of the public highway, for example, or footpaths, or protests and whatever else. It puts another layer of law on top, which now criminalizes it with up to two years in prison extendable to five years, as well as unlimited economic penalties, including the right for them to seize your assets. It also included writing anything or posting anything on social media that INEOS or its supply chain didn’t like. Talking to their employees, or communicating with them, or their entire supply chain, all their workers, encouraging anyone to protest, helping anybody to protest. It was extremely wide.

INEOS brought this injunction in the business division of the high court, the chancery division. They are not specialized in human rights issues. When they bring that type of thing to the court, they have to fill out a form. There’s a box on the forms asking whether the case involves aspects of the human rights act or not. They ticked the box no.

KEVIN BLOWE: The main concern of this court is about protecting people’s … the property of the company’s that’s applied. They are ultimately on the side of major land owners, property owners, and those in power.

JOE CORRÉ: INEOS were boasting about this injunction being the widest injunction of its kind ever in the history of our legal system.

We gathered lots and lots of evidence, some very poignant witness statements from all the local people affected by this. We had serving police officers that had been bronze commanders in public order policing. He has explained how the injunction is a very difficult thing. It makes the police’s job far more complicated. They don’t need it. In fact, it could place the police, in certain circumstances, on the wrong side of the injunction.

What is done effectively is to extend the interim injunction, so it has not been made permanent. What we managed to do on the positive side this morning is we cut off one of the legs of this animal, this injunction, a very important part, which was this harassment issue. The idea that if you post anything on social media from anywhere in the world that you’re caught by the terms of this injunction and could face imprisonment and unlimited financial penalties just for writing to them or posting something that they didn’t like, so that has been taken out. Alongside the point about encouraging others to protest, so that would have caught before if you’d have brought protesters a cup of tea you were helping them or encouraging them, and therefore you would be caught by the terms of the injunction. That has been thrown out as well. When we go back to court in two weeks, or after discussing our options with the lawyers, I think the likelihood is that we will be going to appeal.

I think this is something that these fracking companies and the government just don’t understand. People are just not going to tolerate this. They can’t. If you take, if you go to a small town in this country and you say to people, “All right, we’re going to frack next to you,” and they say, “Well we don’t want you to frack.” “Well, we’re going to frack you anyway.” Well, all right what’s your options then? Move away, sell your house. Who’s going to buy your house? No one’s going to buy it. You’re stuck there because who would want to buy a house next to a fracking site. Your house has completely lost its value. Where are you going to go? In other words, what have you got to lose. That’s the point, and that’s what they don’t understand. Fracking is going to put people into a position where they’ve got nothing else to lose, and these types of injunctions aren’t going to mean anything.

December 2, 2019
Sign Up for Our Newsletter
Help Us Make Real News!