Paul Watt discusses the fight against social cleansing and gentrification, and specifically what he calls the 'Nomadic War Machine,' where campaign groups occupy spaces to shift the power balance with the landlord or local authority

Paul Watt discusses the fight against social cleansing and gentrification, and specifically what he calls the 'Nomadic War Machine,' where campaign groups occupy spaces to shift the power balance with the landlord or local authority 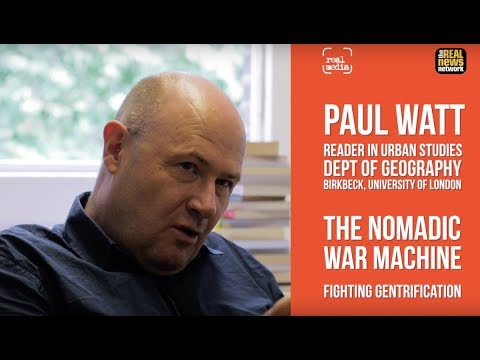 PAUL WATT: If you look at the way that housing companies operate in the city, they’re primarily defensive campaigns. Whereby you have campaigns then that are defending their rights to a particular place. So, it might then be an estate then who are threatened with demolition. So, the campaign then, is actually based around, “We want to defend our existing homes and community against the estate renewal/demolition.”

So many of the campaigns are defensive. They’re defending place, basically. I think the difference that I kind of try to identify with Focus E15, which is the housing campaign in East London, led primarily by young mothers who had been threatened with eviction, displacement from the city. I think the difference there is the way that the mothers … They had a much more fluid dynamic relationship to space. So, what they did was that they engaged in a series of temporary occupations of space basically. So, they weren’t rooted in any one place, they were quite mobile. That’s the idea, then, of this notion of the Nomadic War Machine. So they’re actually moving through the city, moving to different spaces and temporarily holding that space. Temporary occupation. So for example, they occupied the offices of the housing association. They occupied the offices of the local authority housing, homeless department. They occupied the half-empty Carpenter’s Estates.

I’ll give you another example, basically. Again, if you think about the way that political negotiation goes on, in relationship to housing. I was at a housing meeting the other night. It was a cabinet meeting in North London, which was discussing a particular estate renewal program. What you find in those, and there were various objectives from the housing campaigns there, and what you tend to see at those particular events is you tend to see the way that they’re incredibly staged, managed, events. The space, those Deleuzian terms, is striated. In other words then, everybody has an allotted space within the chambers to where they can sit and they also, they get time allocation. You’re allowed to speak for three minutes. It’s a sort of striation of time. So, in other words, the state totally controls the political process. It means then that the objectives to any development, they have to slot in to these allotted physical spaces within the actual network of the state, basically.

The difference again with the Focus E15, is that basically then, they were told that they couldn’t go in this place, that place, and the other place. Actually, then, through these temporary occupations, they managed to break that sort of state power, if you like. At least temporarily. And in so doing, what it does is it creates an intensity. It creates, in Deleuzian terms, is intensity. It means, then, that there’s a shift within power dynamics in relationship then between the everyday people and the state itself. Basically, then, the campaigners then can gain sort of a political advantage. It’s kind of like, it’s the way that … Again, it’s similar to what the occupations have gone on in lots of cities, like Gezi Park, like the Occupy Wall Street, like all those temporary occupations. You could even say the occupation of Tahrir Square in Cairo. What these occupations do is they shift the power relations much more towards, in crude terms, the people.

CARD: Why are Labour Councils demolishing estate and gentrifying?

PAUL WATT: I think that what’s happening in the city is that some Labour Councils are essentially operating in a very neoliberal fashion. So they’re totally engaged in this process, then, of site renewal, demolishing estates and providing lots of private apartments, really.

But it’s very clear, also, that there are group members, some Labour Councilors, who are very unhappy at what’s actually going on, because they see it as it’s their people, essentially, working class council tenants are the ones who are being at the sharp end of these sorts of processes, basically.

So I think there’s a sort of pros and cons of station going on right now within many local Labor parties in this city in the sense then that you’ve got the councils who are enacting these sorts of policies and then you’ve got a more grassroots, then, including some councilors, who are opposing those policies.

It’s not simply a kind of Corbynist versus progress fault line, but I think that is an element, that certainly is very interesting. Again, if you look at the heads of some of the Labour Councils who are the most vociferous in relationship to exactly introducing these estate renewal/demolition programs, still like gentrification, some of those councils, the person who they supported in the election, the leadership election in 2015 for the Labour Party, was Liz Kendall, the most progress, the most Blairite of all of the four candidates.

Now what you’ve got then is I think again because of momentum, because of the kind of like Corbyn’s election, particularly as a result of his boost in the last general election, I think now what’s happening is a process of contestation precisely within local labor parties in London, whereby many of the grassroots, and as I said, and some labor councilors are unhappy at what are, de facto, neoliberal policies.

Well, gerrymandering is whereby local authorities basically, they change of kind of like the policy and they get in people who are gonna vote for them basically. So I suppose the classic example would be Westminster in the 1980s and Shirley Porter and then basically, they were providing more private homes, that would mean then that more Tory voters would be moving into the area.

I think generally if you look … probably the people who are more likely to be moving in, particularly those at the very high end of the income scale are probably more likely to be conservative voters. But it’s interesting, because in a way, because given that yes, it’s the case that many of the local authorities that are doing these estate renewal/demolition programs, some of them are Conservative, but some of them, quite a lot of them, actually are Labour Councilors. So in a way, they’re actually gerrymandering against themselves.

Some of the private developments that they’re getting in will actually result in a probably a greater increase of non-Labour voters, basically.