From the 'Conference at the Gates' organized by 'Stop The Arms Fair', Real Media explores a workshop on art and militarism that was held during protests against the 2017 Defense and Security Equipment International (DSEI) arms fair in London

From the 'Conference at the Gates' organized by 'Stop The Arms Fair', Real Media explores a workshop on art and militarism that was held during protests against the 2017 Defense and Security Equipment International (DSEI) arms fair in London 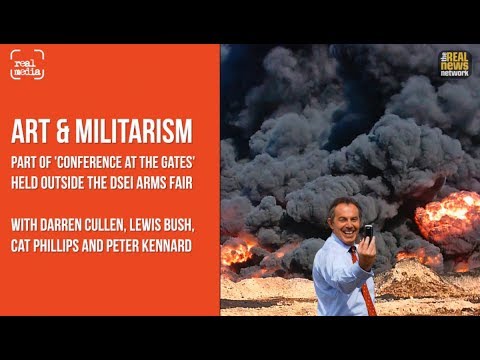 DR. RHYS CRILLEY: Militaries have recently faced a backlash in public opinion of the wars in far off places and the suppression of civil liberties at home. They’ve started to invade our imaginations through films, computer games, sports, and social media. Recent documents reveal that the U.S. military has worked on over 800 major movies and more than 1,000 T.V. shows. And in 2002, the U.S. Army even made its own computer game. And all of this sits alongside the military’s daily use of press offices, and the sponsorship of events like the Super Bowl, Armed Forces Day, the Xe Games, and this year, for the first time in history, the Edinburgh Fringe Festival. One solution that we are going to talk about here today is perhaps to fight fire with fire. And use art and use popular culture to highlight how horrific, how brutal, how boring, how stupid, and how ridiculous war, militarism and the arms trade are.

DARREN CULLEN: I originally thought I wanted to go into advertising, and I studied it for a while, and I kind of … after a few years realized it was an actual terrible idea and advertising is just this machine for creating human misery and taking stuff from one hole in the ground and putting it in another hole in the ground and making money in between. When it comes to actual military recruitment advertising, it feels a lot more nefarious because the worst thing that could happen if you get duped by an advert for a product is you find something at a slightly more expensive brand over a generic rival, or you think that … kind of for a moment think that a new phone is going to make you more creative, or a car is going to make you more popular. But if you get recruited into the armed forces though their advertising the worst thing that can happen to you is if you lose life or limb in pursuit of the U.K.’s resource wars.

The British military actually has its own toy range now called Hegemon Forces, and it gets a full page in the adverts catalog every year, every Christmas. So I thought it would be good to take that idea to its logical conclusion and did these. [Inaudible] the actual box toys decided to try and turn them into video adverts for the toys using child actors. This is a shot from it. That’s just a piece, a part of the campaign to try to raise awareness about the fact that the U.K. still recruits 16 or 17-year-olds and you can actually start applying for the British Army at 15 and 7 months with your parents’ permission.

The more recent projects I did was, I designed these … become a suicide bomber recruitment campaign for the Royal Navy. We kind of regard the extremists and terrorists as being kind of beyond the pale in their disregard for human life, where we’re actually also willing to commit suicide. The British government says it will actually use a first strike to defend our national interests, which isn’t even … What does that even … They refuse to define our national interests. Well, somebody printed them and put them in bus stops around London.

LEWIS BUSH: I’m a photographer, and I see the problem with photography is it’s all about showing stuff that’s visual. You know what’s the problem with these kinds of subjects, these kinds of issues? They’re often very much like conceived to be invisible. The way these fares often work is they try to exactly avoid the kind of visibility that a photographer like me really needs to work. Not just employ not very traditional photographic ways of working, which often involve reusing existing imagery from all kinds of sources.

So I just finished a two-year project on, basically on intelligence agencies, which you can imagine they’re not going to let me in anywhere near them in fact, so you have to get quite creative in terms of how you’re going to explain what these kinds of fields and industries and organizations do … Because I think, for me, that’s what a big part of what our job is maybe, is to kind of partly to capture people’s imagination and get them excited and engaged in these issues, to make them see that they are important and they’re worth doing stuff like this about. And maybe also a little bit slightly remind kind of people in there, that we are interested in them and we’re not kind of okay with what they’re doing.

CAT PHILLIPPS: So what we do, is we take press imagery and we take how it’s being presented in the mainstream media and we re-articulate it. With a phot op, which is Tony Blair in front of the explosion, we are able to reframe his position, he’s such a smarmy … And like that’s his big smile thing, like the way he presented the legitimacy of going into Iraq. Or going to a place of resources is always what’s actually being put out in the mainstream media and have to subvert that by just flipping it.

PETER KENNARD: This is antiwar artwork in itself, this amazing gazebo thing with the pouring rain and the Daleks being arrested. I mean the whole thing is an unbelievable performance of dissent from all the horrors that are going on in [inaudible] building. That sort of, to me, shows that there are many different ways of protesting. It’s really to show what the images of what we are getting are bombarded with all the time, and then to displace them, to cut them, to do violence to them, to show what’s actually going on, to show the victim and the victimizer, to bring things together, that’s what montage is about.

It’s coming up to 80 years since the bombing of Guernica, which is the first real carpet bombing of civilians. And Guernica itself is an amazing piece of work. You see it, you see images form Guernica and you saw it in Tyrian Square, you see it all over the Middle East on demonstrations, you see it here on demonstrations, and as we know there was version of it up in the United Nations when Colin Powell read his paper about going off to bomb Iraq. So they put a big blue curtain in front of it, and the U.N. Public Relations woman said, ‘No, yeah, we didn’t like the horses in the picture.’ That was her line. Yeah. That image is about the victims, all the faces, the faces of the women, they are being bombed from above into this space. You can’t measure the results.

It’s something that goes on for … It’s something that Brecht talked about. He said … He talked about a drip of water going on to a pebble. And then after 400 years it might be an indentation in the pebble. Someone who might see army recruitment adverts, and they might see your piece and somewhere in their brain, there’s some critical edge that’s being built up because they’ve seen your piece. I mean that’s the area that when working …

DARREN CULLEN: It’s like with the Action Man films, a teacher came up to me … Recently I was doing a stall … And he said he had been showing it to his students, I think they are like 14 or 15, and he said a couple of them had spoke to them afterwards and said that they had been thinking about joining up, and they were like, they definitely weren’t into it now. Really into it now. It just so good. Militaries and corporations both know that by targeting children they can guarantee adults to be kind of sympathetic to their brand. I’m doing this project Thomas the Tank and Friends, and it’s basically Thomas going to war and he’s very optimistic about the whole endeavor util he gets hit inside with a shell and he can feel and hear his crew burning alive inside his body …

CAT PHILLIPPS: Okay, so you go to dark places as well.

DARREN CULLEN: But I’m still wrestling with that a little bit, about if it’s appropriate or not.

What is that book, that War Against War, the First World War book where its whole thought is that nobody had seen from the front lines and there’s this sanitized version of the First World War, which is kind of “our boys” fighting in a field somewhere and then these are actual horrific bits of bodies, and stuff like that. And sometimes if it really feels like it’s necessary, and that’s the only way that you can feel the horror of those situations.

Well, I suppose if we make this work, because I believe it does have an incredible power.

DARREN CULLEN: It’s just putting it out there, just being here. It’s part of the slow process really.