Two women from conflict zones in Sri Lanka and Zimbabwe explain the costs of war and the arms trade for their homelands, and in particular the impact on women

Two women from conflict zones in Sri Lanka and Zimbabwe explain the costs of war and the arms trade for their homelands, and in particular the impact on women 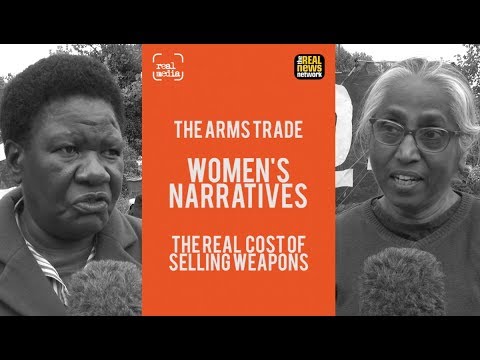 Puni: I am from Sri Lanka. I have been living here for more than 30 years. I left my country because of ethnic conflict. Our ethnic conflict started from the time we got independence from Britain in 1948, and it’s still going on ’til today, up to this minute.

From the time of independence, the ethnic minorities have been oppressed politically, economically, socially, culturally, and now even environmentally. The first 30 years, Tamil leaders fought peacefully, nonviolently, for their rights, their own due rights. But they were not given their rights, so after nearly 30 years of independence, an armed struggle was started by young men, very young men who didn’t see any economic future, political future. That went on for 30 years, and it was brought to an end brutally, most brutally, in 2009.

One would expect a political solution after armed rebels are wiped out, but nothing like that happened in Sri Lanka. Till today, for the last eight years, no political solution, but the whole of the North Tamil area has been highly militarized. The military has taken over a lot of economic activities. The people are unable to recover and there is no development, economic development for the war ravaged people. So they are still fighting, in a way.

The weapons. First of all, Sri Lanka was supplied by Russia, the UK, the US, Israel, and through other intermediaries, like Ukraine and many other countries, supplied. They were willing to supply any oppressive country. The Tamils are still paying for it, for the high militarization and the huge amount of money was spent on defense, much more than in health and education. It was actually a shame that this country, so-called Buddhist country, had to spend so much more on defense than on education and health.

Let us stop making arms. Arms is destroying humanity in all countries. Not only Sri Lanka, in all countries. People have been suffering more than enough. The children must have a future. Now that the UN has started the program of sustainable development goals, why don’t we stick to that and stop the producing and the selling arms? Let us get on with the SDGs and let the humanity prosper and let our children enjoy peace and prosperity.

Angela: My name is Angela, and I am from Zimbabwe. Zimbabwe used to be called Rhodesia before, because before we were colonized by the British government. After some time, people thought that it wasn’t good. People had suffered [inaudible 00:04:59] during that colonial regime. They thought, “It’s better to regain our land and better to get our land back,” so they went to war and they started to fight from the outside. They fought from Mozambique, coming in the country, fighting the government. It happened for quite a long time.

I remember during that time I was still an adolescent girl who was still going to school, and I was going to a secondary school. My school that I was attending, it was closed. I met my father, and he told me that if you still want to go to school, don’t come to the village, because at the village all the girls are taken, all the girls are being used for sex. If you still want to go to school, you better go to your sister. That is what happened to my life. Then I went and hide in town where my sister was.

The women of Zimbabwe are really affected because women are the most breadwinners. They can’t farm anymore because of that the war is going on everywhere, and because the soldiers, they actually, using their weapons, they go around every house, intimidating people, using those weapons to say, “Go and register to vote, and make sure that you register for the ZANU-PF, you register and you have to vote for the ZANU-PF.”

That power of the weapons that the soldiers are using is actually having an impact. Because a soldier will be holding a gun, you can’t say no. You have to go and do whatever he wants. Most of the women, they are also raped, and they rape people when they are going to vote or whatever. They are the victims most, because those young ones, they rape them and everything. These weapons are really affecting the lives of women.

I would say to Theresa May, please, stop this selling of the arm, wherever, to any country, to any nations, because you are destroying people’s lives. You, and those that are producing those arms, they should actually put to a stop, because it’s affecting people’s lives everywhere. To Theresa May, we are here and we are here to stay. We have the right to be here. So much has been taken and brought here to build this country, so why don’t you accept us as human beings? Why don’t you make peace with us? We only want to live here and to unite with you guys. We are not here to cause war. We are not here to fight with you, but we want to live together in peace and in harmony as individuals and as human beings.