Real Media: Drones, Nationalism and the Future of Warfare

Author of Shadow World: Inside the Global Arms Trade Andrew Feinstein talks about the the future of warfare, the effects of drones on the military industrial complex and the role of nationalism in an increasingly unstable world

Author of Shadow World: Inside the Global Arms Trade Andrew Feinstein talks about the the future of warfare, the effects of drones on the military industrial complex and the role of nationalism in an increasingly unstable world 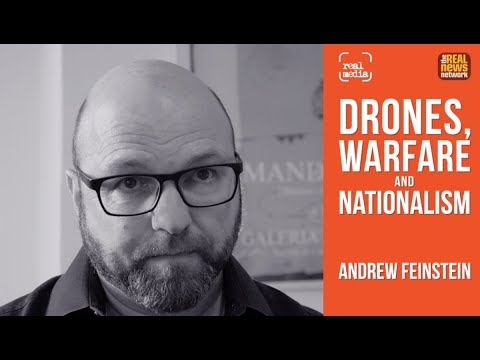 ANDREW FEINSTEIN: We’re seeing significant changes in the nature of warfare. The most visible manifestation of that is the use of drones. We have the awful situation where in the Obama administration in the United States, for a number of years meetings were held every Tuesday, sometimes involving the President, where decisions were made about who would be killed in targeted drone strikes that week. Those killings would take place all over the world, and in a couple of instances even including the killing of American citizens.

What drone warfare does is effectively make the killing of other human beings without due legal process so much easier. It therefore makes it much easier for politicians to make those decisions to engage in conflict and warfare. In addition to which, it puts those making the decisions for killing at even greater distance from those they kill. It obviously in no way minimizes the suffering of those who are killed, and as we have seen, it in no way minimizes the trauma of those who are ordered to do the killing. What this is is a form of state murder at a distance. It is an attempt to sanitize something that can never be sanitized. It is actually, as a consequence, making it worse.

A film is being made called Drone about the way in which, particularly the American military, but also British and European militaries, have been targeting kids, effectively, at gaming fairs because the skills that are used in gaming are very similar to the skills needed by drone operators. The consequence of this is that you are taking something that is supposed to be harmless and you are using it as a training ground for the killing of other human beings. In other words, what we are doing is we are taking everyday activities, we are turning them into murder, and we are normalizing them. I think perhaps more than anything else, this shows the terrifying and deadly effect of drone and robotic warfare, which unfortunately looks as though it’s going to be a part of our future.

The economics of the industry are having to be recalibrated so that some of this technology, which should be fairly cheap, such as drones, is actually being technologized to such an extent to try and drive up the costs so that the companies can continue to make their huge profits. Let’s not forget that one of the beneficiaries of the huge profits of weapons making companies are political parties. To whom they make huge donations, and in return get the support of politicians. The other difficulty with this, though is that it isn’t stopping our governments from buying the conventional weapons systems that have been sold for decades and decades. It’s actually not bringing down the cost of defense spending, but in some instances, like in Donald Trump’s America, actually increasing it at a time when the world can ill afford this.

But there’s another dimension, and that is the extent to which a democratic and accountable state can hold to account both the weapons makers who are making this very advanced technology and those who operate it. We are heading into frontiers that we don’t understand. As a consequence of which, our governments are unable to appropriately regulate these new forms of warfare. Given the failures of our governments to properly regulate conventional warfare, and the buying and selling of conventional weaponry, as we get into these more technologically advanced forms of warfare and the weapons of war, my fear is really that our governments are going to be even less adequate at controlling these in a way that is to the benefit of humanity.

I think that warfare generally is a tool, is a promoter, of nationalism, of a very narrow form of patriotism. Not a pride in one’s country, but a hatred of everything that is not one’s country. I think that as warfare becomes more technological, it becomes in some ways easier to undertake. So that nationalistic sentiment, so the ethnocentrism, so the racism, so the hatred of the other that warfare inevitably propagates, is going to become a new normal unless we fight against it.

I should say, on a very personal level, as the son of a Holocaust survivor, as someone who grew up in the system of apartheid and saw what racial oppression in its worst form looked like, the ways in which warfare has contributed to nationalism in Trump’s America, in our own United Kingdom, where fear of the other, where the notion of otherness has become a symbol of detestation. I have a very real concern that the way in which warfare is going is going to feed more easily into the nature of warfare that we will have, and we will lose the boundaries between what is science fiction, what is fantasy, and what is reality. Perhaps having seen Nazi flags on the streets of America is a very prescient warning sign of where we are headed.

The arms trade needs to be understood in the context of near liberal ideology, where the so called free market, which is nothing of the sort, allows companies to effectively do what they want. Nowhere do we see this more profoundly them amongst the weapons makers in our country who effectively are above the law. But the greatest irony is that in the way we conduct our arms exports, we are making ourselves far less secure. First of all, we are ensuring that there is far more weaponry in regions of conflict, the Middle East being the most obvious at the moment. Secondly, we are providing weapons and vast quantities of corruption to regimes who do not have our best interest at heart. The most obvious of these is the kingdom of Saudi Arabia, regarded by our government as one of our greatest allies to whom we sell the vast majority of our weaponry.

Not only do all of those transactions involve gargantuan amounts of corruption that ensure that the Saudi royal families stay in power and stay in place, but that very same government to whom we are selling weapons, supposedly because it is in our broad defense and national security interest, are known to have financed, supported, and in some instances even supplied weapons to some of the groups that have been committing atrocities on British soil. So what we have in the global arms trade is a cycle of stupidity. The only reason that it continues is because companies, senior executives, senior politicians and their political parties, military leaders, and senior intelligence agents are benefiting personally, both politically and economically. It is up to us to break this cycle that is making our country less democratic, more corrupt, and most ironic of all, less safe.

We are citizens of this country. We are taxpayers of this country. Our role as citizens is not to vote in an occasional election. Our role as citizens is to hold our government to account. I come from a country that brought down the system of racial oppression. That was a combination of international solidarity and people in the country making that country ungovernable. Do we want the significant percentage of our tax pounds to go to BAE systems and other weapons makers who are then paying billions of pounds in bribes to the Saudi royal family, to the rulers of the UAE, who in turn are supporting some of the very groups who have identified the United Kingdom as some form of enemy? Do we want our tax pounds to be used for the manufacture of this weaponry that is doing nothing to defend us?

We have a responsibility to demand of our politicians what we want our money to be used for. That is why we elect them to government. That is why our taxes pay their salary. The only way to do that is to deprive them of our vote until they commit to doing the things that we want them to do because unless they do that, they’re not our representatives. The starting point is to ensure that our democracy is in fact a democracy.