As the world's largest arms fair gets underway in London, author of The Shadow World: Inside the Global Arms Trade, Andrew Feinstein talks to Real Media about corruption and justification of arms deals

As the world's largest arms fair gets underway in London, author of The Shadow World: Inside the Global Arms Trade, Andrew Feinstein talks to Real Media about corruption and justification of arms deals 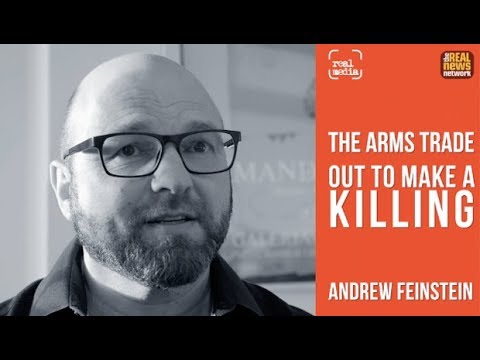 ANDREW FEINSTEIN: My name is Andrew Feinstein. I am the author of the ‘Shadow world: Inside the Global Arms Trade’.

CARD: BAE Systems – Most Immoral Company in the World?

ANDREW FEINSTEIN: BAE systems is certainly one of the most, if not the most, immoral company on the planet. There was certainly a period from the late ‘80s through the ‘90s when it was undoubtedly involved in more corrupt activity than any other commercial enterprise on the planet. And the British government chose to turn a blind eye to that behaviour.

But in addition to which, BAE systems single-handedly contributes to extraordinary misery and suffering around the world. To give just one example, in the last couple of years, BAE has sold Saudi Arabia 100s of millions of pounds’ worth of bombs and missiles. Those bombs and missiles have been reigned down by a Saudi-led coalition on innocent civilians in Yemen. Anywhere between 4 thousand and 12 thousand innocent civilians have been killed, probably many of them by British bombs and missiles. In addition to which, British advisers are supposedly advising the Saudi-led coalition on its targeting, which a UN-report identifies as having at least one-third of its attacks civilian targets.

But even more than that, what BAE systems has done is it has corrupted countries around the world, including my own country South Africa, where just four years into our democracy, BAE paid 115 million pounds of bribes, according to the MET police, in order to win a contract for which its product should never have been awarded a contract. It was only because the defence minister, who was bribed, ensured that BAE won the contract. What that did is that it undermined South Africa’s young democracy, it ensured that scarce resources were spent on weapons that the country didn’t need and has barely used, rather than, for instance, providing life-saving medication for millions of South Africans living with HIV or AIDS at the time. In fact, Harvard University has estimated, that as a consequence of that policy decision, at least 365,000 South Africans died avoidable deaths within five years of that decision. This the sort of effect that BAE systems has on the world.

But, it also has a corroding impact on Britain’s own democracy and on the rule of law in this country. I say that because so much of what BAE systems does is kept out of the public sphere by the veil of national security imposed secrecy that over hangs all of the arms deals that they do and all of their activities, be it legal or illegal. It means that when a brave prosecutor is prepared to try and bring them to trial, the government will step in and ensure that that doesn’t happen. The nature of the relationships between the company and politicians, very senior politicians, between the company and military leaders, between the company and intelligence agents is such, that I believe, together operate in a way that benefits the company, that benefits other individuals, both politically and economically, and that is to the disadvantage of the best interests of the United Kingdom.

CARD: So our politicians are sales people for the arms industry?

ANDREW FEINSTEIN: Our senior politicians in the UK are the sales people in chief for the UK’s arms industry. They serve that industry completely uncritically. So they don’t mind how much corruption is involved in the arms deals, remembering that the arms trade accounts for 40% of all corruption in global trade. And secondly, they don’t mind who those weapons are sold to. So they are quite happy with companies like BAE and others selling weaponry to Saudi Arabia, for instance, which is using that weaponry to kill innocent civilians in Yemen at the moment.

CARD: How do politicians justify the industry?

The reality is very different to that: Britain sells weapons to anyone who will buy them. Britain sells weapons to numerous authoritarian dictatorial regimes who use those weapons to oppress their own people, who use those weapons to violate international humanitarian law and even to commit war crimes. In addition to which, the sales of weapons from British companies invariably involves huge levels of corruption. So not only is Britain violating a range of international laws of multi-lateral agreements, but it is also violating British national law and it is propagating corruption around the world and in Britain itself.

Finally, it is worth saying that what these arms exports do is rather than buttress Britain’s position in the world or secure Britain’s national security and defence, it actually undermines both. We have seen links between countries that Britain has sold weapons to over decades and atrocities committed on British soil. We have seen Britain engage in wars primarily to sell weapons that have created not only extraordinary misery in those countries, but have had huge consequences for the United Kingdom, political consequences and even consequences of violence committed on British soil. So it really is my contention that despite what the government says, what the British arms industry actually does is that it undermines Britain’s standing in the world, it undermines Britain’s supposed support for democratic values, which its arms exports are themselves undermining, and it actually and most ironically, makes Britain itself less rather than more safe.

CARD: Tell us about the Biggest Arms Deal in history.

ANDREW FEINSTEIN: the biggest arms deal in history was something called Al-Yamamah deal, a deal between the United Kingdom and Saudi Arabia. It was a deal worth about 43 billion pounds in which over 6 billion pounds of bribes were paid, primarily to members of the Saudi royal family. This was the most corrupt commercial transaction in commercial history of all time. It was sanctioned by Margaret Thatcher, whose son Mark Thatcher was paid 12 million pounds as a bribe on the deal. The greatest irony of all though is that the son of the Saudi defence minister, Prince Bandar bin Sultan, who was the Saudi ambassador to the United States at the time was paid over a billion pounds into his accounts which were held in Riggs bank opposite the White House in Washington, D.C. Some of that money found its way into his wife’s account, and inadvertently he claims, into the accounts of two of the 9/11 hijackers. It was only at that point that American authorities became at all interested in the deal. Other than that, they were quite happy with the bribes, as were the British. And it should also be borne in mine that, in addition to the over 1 billion pounds, Prince Bandar was also gifted by BAE an airbus for his private and personal use painted in the colours of his favourite American football team, the Dallas Cowboys. Until at least the end of 2007, the British taxpayer was paying for the running and maintenance of that birthday gift. This transaction became the subject of a massive investigation by the serious fraud office, at the point in which they were ready to charge senior executives of BAE and the company itself with corruption. Tony Blair’s government stepped in and closed down the investigation. That deal, more than any other, reflects the true nature of the British arms export industry.

DSEI reflects the true, corrupt and uncaring reality of the global arms trade brought together in a corner of London. It is a stain, as our Mayor has said, on London itself and on the United Kingdom. Every year as DSEI gets bigger, so too have the protests. And what has certainly struck me over the last two or three manifestations of this arms fair is not just the number, but the commitment and the courage of those people protesting this arms fair. There is absolutely no doubt that these protests have not only raised awareness about what DSEI is, about the nature of the arms trade in which the United Kingdom plays such a large part, but I believe that it has also created a greater awareness about issues of British foreign policy and how they might not be in Britain’s best interests.

And it is for that very reason that we have seen, particularly in recent election discussions, we have actually seen a change in the nature of debate. And we have started to link the tragic events that happen on British soil to aspects of British foreign policy, and particularly to aspects of the British arms trade. And I think that movement in this debate is really to a large part down to the sorts of difficulties that protesters, over the years, have been creating at DSEI and the sort of awareness that have been generated by that. So I think the protests that accompany DSEI is absolutely crucial and is something that each of those committed individuals who get involved should be extremely proud of.