Real Media: ‘This is all a lie’ – William Hawk Birdshead at the British Museum 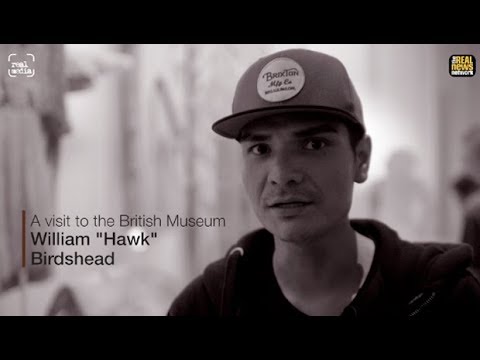 WILLIAM HAWK: My name is William Hawk Birdshead. I am from the Standing Rock and Oglala Lakota tribes in North Dakota, South Dakota, and I’m also enrolled of the Cheyenne and Arapaho tribes of Oklahoma and Montana. I come from a long history of indigenous revolutionaries. That’s who we are. We’re going to bring change to this world that we live in and bring awareness to who we are because everything that’s learned in history isn’t written by us. It’s written by the oppressors. That’s why we’re sharing this story and that’s why I’m here right now at the museum and in London. I don’t like it. I don’t like it at all.

It’s like, it’s like my people are on display. It seems like, very disrespectful. It’s dishonoring. My people, it’s just, it’s despicable. It’s disgusting, but what’s really disgusting is our sacred pipes being displayed on this … It’s like, these pipes are my people’s connection to the spirit world, you know? These are who we are, like these pipes. My grandmother, I was raised with the pipes, the pipe stems, everything has a story. Everything has a purpose. It doesn’t say that in this. It doesn’t give you that information.

This is all a lie. It’s a lie to make people feel comfortable about taking somebody’s belief and then just throwing it out there for everybody. It’s sickening. It’s like a zoo. You go to a zoo and you see these things, and it’s like, “Oh wow.”

Cheyenne, Arapaho, Lakota and then of course we’re related to the Nakota, Dakota, which is also in my blood. The Hidatsa, Mandana and Arikara. They’re like in close relation to the Lakota and Dakota and Nakota as well because we’re all so, in this space. We all shared the hunting grounds. We all shared the history of this land and the culture of this land and the spiritual idea and the spiritual foundation of this land. Even in the films that you see today that kind of depict native, Native American culture and even historic films like of Crazy Horse and Sitting Bull and Rain in the Face, all these different chiefs, even that’s all distorted. None of that’s true.

If you really studied history and actually spent time with the Lakota people and understood who we are. We’re a very respectful people. We respect life. Our history was written by us, so what makes it that anything in here could be correct? You know what I mean? That’s, it’s just … Dude, everything is a lie, especially in museums. Especially whenever you’re talking about somebody’s history that wasn’t written by their own people. We’re about life and death and living, but once death is complete, even over time, something’s going to decay. It goes back to the earth. That’s just how we are.

What’s really interesting is that JP Morgan Chase is actually one of the main companies that destroys indigenous lands and indigenous reservations and territories in the Americas. They fund a lot of the pipeline companies. They fund a lot of the gas industry, and for them to like put their name on who, on my people, for them to put their name on my culture, put their name on my spirituality, it’s a shame. It’s sick because JP Morgan Chase was one of the main funders of the Dakota Access Pipeline, and Standing Rock, where I stood up, where my people stood up. We put up a fight, yet they still backed that company. They still backed the … Then they have something like this.

JESS WORTH: It’s a close relationship and I think it’s a long term relationship as well. They have a really big plaque kind of etched up into the wall.

WILLIAM HAWK: Yeah I did see that.

JESS WORTH: Over there.

WILLIAM HAWK: Right. That’s interesting for them too. It’s like …

WILLIAM HAWK: Well it’s kind of like … Can we get that message out there?

WILLIAM HAWK: I want to work with you guys. You guys are like an amazing crew and you guys do so much work that’s really not getting, it’s not getting the attention that it should be getting.

JESS WORTH: So there’s another like horrendous introduction from BP about this.

JESS WORTH: As fellow explorers of the ocean deep.

JESS WORTH: Yeah. Do you think they’re surprised that we feel a strong affinity with maritime archeologists?

WILLIAM HAWK: So many animals die every day just because of that company.

WILLIAM HAWK: The last stand, they call it. I don’t know if the Gull is in here. Gull was one of his main guys. Gull is my great-great … Yeah there he is. I’m named after his sister’s son, William Hawk, so that’s very close relative there. I mean was and were are the lie. We’re still here and we’re still fighting for our rights. Just like this is an example, a prime example.

The people of the Northwest did not need agriculture to develop complex societies. Their ability to preserve and store food, you know. They made beautiful boxes and dishes. We still do. We still do this. I see BP’s logo and name on everything here, especially in the art. These native exhibits and it’s really just a slap in the face to my people. These coastal tribes right here are all suffering simply because BP and these other gas industries and these other corporations are destroying their lands, yet they are going to perpetrate themselves as like these saviors and we’re preserving. You’re really just killing off an entire race of people. Yeah.

WILLIAM HAWK: It’s for their image, because at some point, at some point the world’s going to say, “Oh shit. Look at this. Look what they’re doing. Look what these companies are doing to these indigenous peoples.” Then they’re going to say, “No, no, no. It’s not like that. Look it, we’ve been preserving this culture. We’re preserving their heritage. We’re preserving who they are.” That’s why I think that they’re doing this. They’re not saving who we are.

Who we are is right there. This is our history and it’s beautiful and it’s great, but we can preserve it just as well. We have museums that we can put all of our artifacts in. We have these spaces that we can put these in. A lot of these artifacts are actually stolen. What’s good about an oil company saving art?

There are other, there are alternatives. It’s up to this, the museum curator and the museum board to actually come down and make those decisions.

SPEAKER: Sorry to interrupt. Do you have permission to be filming?