Real Media: The Special Relationship Between UK and Saudi Arabia 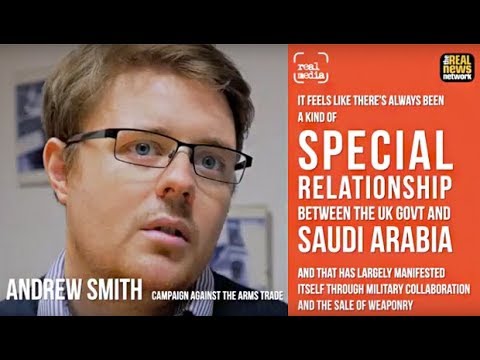 ANDREW SMITH: It feels like there’s always been a special relationship, so to speak, between the UK government and Saudi Arabia. That has largely manifested itself through military collaboration and the sale of weaponry, and that’s been going on for decades. Throughout the 1980s when Thatcher was in power, she played a central role in executing what’s now known as the Al-Yamamah deal for BAE assistance, which was a multi-billion-pound deal to sell a whole fleet of fighter jets to Saudi Arabia. This carried on throughout the ’90s when Tony Blair was prime minister, and he played a fairly central role in organizing another major fighter jet deal with Saudi Arabia. That was for the Eurofighter Typhoons, many of which are currently flying over Yemen. David Cameron was actively trying to seek more business for more fighter jets, and Theresa May has been doing the same. The issue’s been very much an institutional one rather than a party political one. It seems to be no matter who is in power, Saudi Arabia has always played that central role in UK foreign policy. The UK has not just sold weapons but also given it unbending and unreserved full political support as well.

The Campaign Against Arms Trade took legal action in 2006 against Tony Blair’s government following an intervention from Blair to stop a Serious Fraud Office into corruption in a major multi-billion-pound arms deal between BAE and Saudi Arabia. That went for High Court. We won in the High Court, and drew a hell of a lot of attention to it, then it was overturned in the House of Lords, but I think the success in a sense was in managing to establish that precedent. I think actually it played a fairly large role in the Bribery Act which then came into effect. What it did show, though, is also how government will fight tooth and nail to protect their arms companies and arms company interests.

In terms of the judicial review into the legality of arms exports to Saudi Arabia, I want to first of all go back to March 2015, when the bombardment of Yemen began, when Saudi Arabia intervened in the civil war which was taking place in Yemen. Right from the start, Saudi Arabia was doing major air strikes using UK fighter jets and UK bombs, the fighter jets being flown in many cases by military personnel trained by the UK. The UK’s always been essential in this bombardment.

Since then, the bombing campaign has killed thousands of people. Over 10,000 people have been killed in the conflict, and even more as the result of the devastating humanitarian crisis which has taken root in Yemen. We’ve seen the breakdown of vital and lifesaving infrastructure such as hospitals, such as schools, and now we’re seeing people unable to get aid because aid simply isn’t able to reach those who are in need. Throughout this two-year bombardment, we have seen some terrible atrocities committed by Saudi forces, probably the worst of which was the bombing of a funeral which took place last October, turning what was meant to be a scene of mourning into a massacre, killing 140 people and wounding hundreds more.

I think that’s characteristic of the lack of care which Saudi Arabia has shown for the consequences for the people of Yemen. We’ve also seen the bombing of marketplaces, which have killed dozens and dozens of people. We’ve seen the bombings of schools, the bombing of hospitals, even the bombing of a refugee camp very early on in the camp. The way this war has been fought is atrocious. The United Nations estimates, as I say, that 10,000 have been killed as a direct result of the conflict, but the majority of these have been killed by Saudi-led bombardment. The UK has supported that bombardment every step of the way.

We actually got permission to proceed to judicial review last June, so justice has been a very slow-moving thing. Then this February, we were actually in court. We had a three-day hearing, half of which was in public, half of which was behind closed doors, so we’ll never know what took place in that. The full transcripts of the trial are all available on our website, and so are all the documents which were made public, but it was earlier this month that the High Court reached its judgment. It came down on the side of the government. We were very disappointed in the result, and we are pursuing an appeal at the moment.

We believe that if this result is allowed to stand, it will set a very negative precedent. It will be seen as a green light by government to continue arming and supporting some of the most brutal, repressive regimes in the world. To Saudi Arabia and the Saudi military, it will be seen as an endorsement of the terrible war they have fought and the terrible character of the bombardment. By them, it will be regarded as something to celebrate. For the arms companies, it will be something to celebrate. You could probably almost hear the champagne corks popping in the offices of BAE Systems in [inaudible 00:06:25], because it legitimizes what we’re doing. For people in Yemen, there won’t be any such celebrations, because what it ensures for them is that Saudi Arabia will continue in exactly the way it has been doing in its terrible bombardment, and will continue to have full UK support in doing so.

I think what we can say for certain is that their bombardment of Yemen has done nothing to deter terrorism. In fact, groups like Al-Qaeda thrive in those circumstances. It’s created the exact kind of circumstances under which terrorism and violence will thrive. That has been exacerbated and made far worst by the Saudi bombardment. In terms of Saudi Arabia’s directly funding or financing or supporting terrorism, it’s not something we would comment on, although I do notice this government report, which appears to be getting sat on, we think that should certainly be published, and we would certainly urge the government to publish that report.