Real Media speaks to Anna Minton, the author of "Big Capital: Who Is London For?" about the causes, effects and potential remedies for the housing crisis that has been growing for 30 years in London and beyond

Real Media speaks to Anna Minton, the author of "Big Capital: Who Is London For?" about the causes, effects and potential remedies for the housing crisis that has been growing for 30 years in London and beyond 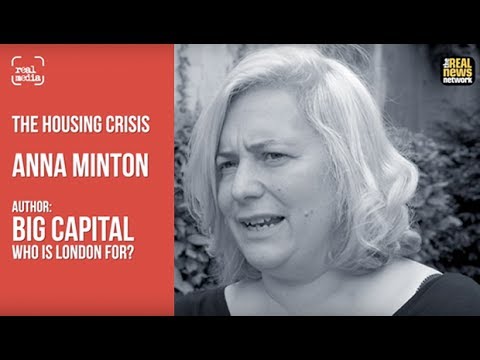 ANNA MINTON: The previous government, which took power in 2010, the coalition government, and then David Cameron’s government, Cameron and Osborne did not believe in social housing at all. They were really trying to get rid of it and the Housing and Planning Act reflects that.

The Housing Crisis in London and in other British cities and in other cities, actually, across North America and in Europe in the post-industrialized West, in fact, is enormous at this moment in time, and it takes in so many factors. But if we just focus on what I looked at particularly in my book, Big Capital, what I was looking at was the impact of huge amounts of foreign investment coming into London and the effect that’s having on local communities. One impact that we’re seeing the demolition of hundreds, in fact, housing estates across the city, housing estates for people on predominantly low incomes, demolished and replaced by apartments, predominantly luxury apartments with very limited amounts of social housing.

Then there are all a whole slew of policies, essentially to get rid of social housing, which have been going on for the last 30 years, since Margaret Thatcher’s right to buy policy, which witnessed the sell-off of two million council homes and has ended with the Housing and Planning Act of last year. Combined with that, you’ve seen the huge increase in wealth inequality since the financial crash, and the policy of quantitative easing has actually resulted in all of this creation of money at the top end of the market. A lot of that has gone into property, and that’s pushed up property and land prices, even higher in London, so London has got some of the most expensive property in the world, seen as the best place for investment by all sorts of people. So that’s pushing up land values and property prices, as well, that’s at the top end.

And then at the bottom end, you’ve got the impact of austerity, and a whole range of cuts to benefits, which have made conditions even worse there. People on low incomes are displaced from their homes on the one hand because their estates may be regenerated or demolished, if you want to use the actual terminology of what is happening. On the other hand, if they live in the private rented sector, they’re often subject to frequent evictions and displacement in that regard. So it’s coming at people from all sorts of angles.

When I was growing up, London was for a very diverse mixed range of income levels and social classes, who not wishing to be nostalgic about it, but rubbed together relatively happily. Most parts of London had a mix of communities in them. A third of people during the early ’80s lived in council housing, and it was a relatively mixed income city. I think London should continue like that. But increasingly, in central London, nobody but the very affluent can afford to live there, and you also do get pockets of deprivation, such as North Kensington, which has recently been highlighted obviously in the most tragic way in the Grenville fire. And you can just see how the local community there was completely ignored by the council and by the company that’s supposed to manage the 10 thousand homes which is social housing in Kensington.

So, London is for the foreign investor these days, plowing large amounts of capital into safety deposit boxes in the sky. You know, that’s a very worrying thing on so many levels. Also, obviously the city won’t be able to function if it continues like this, because teachers, nurses, hairdressers, taxi drivers, cleaners, actually doctors and lecturers can’t afford to live in the city like this.

The government is in paralysis. They don’t know what to do. We are so dependent on property finance in this country, which is such a large amount of our GDP now that the fear is if we don’t actually rest our economy on property finance and the large amounts of debt which are part of GDP, generated by debt-fueled property development, where will our economy be? The only party which has stood up against this is the Green Party, and we’re going to have to have a lot more than that to address it.

Many of the councils who are pursuing these housing estate demolition policies most vigorously are Labor councils. The most controversial developments such as in Suffolk, where [inaudible 00:05:17] Castle has been completely regenerated. That’s a partnership between Suffolk Council and Lendley’s, the massive Australian property development. Interestingly, it’s exactly the same in Harringay.

The way debt developers wiggle out of their obligation to provide affordable housing is through this ridiculous farce that has emerged in recent years, called financial viability, which is really akin to tax evasion and all hidden behind a smoke screen of commercial confidentiality, where none of the documents are available to anybody to look at. They’re not available to the local community. Incredibly, they’re not even available to the planning committee, the local Councillors who make decisions.

What you hear is this narrative of transformation and regeneration of areas and isn’t it fantastic, you know? We’re going to invest 2 billion pounds in the center of Harringay and you’re going to have a wonderful new shopping center and six thousand new homes. You don’t hear that actually communities are going to get displaced and they’re going to lose their homes. That’s not part of the official story.

Local campaigners have actually achieved a lot, so at Cressingham Gardens, the judicial review was successful and it’s certainly not over yet. On the Aylesbury Estate, to everyone’s shock, the local council of Suffolk actually lost that public inquiry, and that compulsory purchase, that first phase of the compulsory purchase of homes on the Aylesbury has been halted in its tracks. Now, that’s still ongoing, but that shows you that actually, a lot can be done through the courts. It’s really exhausting for local communities who have to work on it 24/7, but actually they end up having far more resources and expertise than the councils themselves, and they do have successes.

It depends on whether or not you believe in a city which is mixed and socially balanced and diverse or whether you want to see a hollowed out London where only very wealthy people can live in the city. That’s certainly where we’re moving towards, and I don’t think many of the public are happy with that, either.

Baltimore Takes Aim at the Predatory Capitalism that Spawned Trump