Left-wing candidate Jean-Luc Melenchon could face a very popular right-wing candidate in Marine Le Pen; if victorious, Melenchon would find himself surrounded by hostile actors like Syriza did when they took power in Greece, says Renaud Lambert

Left-wing candidate Jean-Luc Melenchon could face a very popular right-wing candidate in Marine Le Pen; if victorious, Melenchon would find himself surrounded by hostile actors like Syriza did when they took power in Greece, says Renaud Lambert 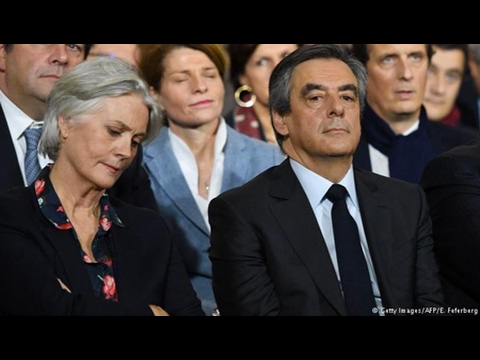 SHARMINI PERIES: Welcome to The Real News Network. I’m Sharmini Peries coming to you from Baltimore.

The first round of the 2017 French presidential elections will be held on the 23rd of April 2017. One of its main presidential candidates, François Fillon, is facing an expanded investigation into whether he illegally hired his wife and children on his expense account, as a member of parliament. The scandal is an important blow to Fillon who was, until recently, the leading candidate in the presidential campaign. He represents the center-right. Fillon denies any wrongdoing and vows to remain in the race. But pressure is increasing for him to drop out. In either case, the largest winner from this could be both the left and the right.

On the far right there is the National Front, led by Marine Le Pen. Le Pen who is staunchly anti-immigrant, who has been celebrating Donald Trump’s victory here in the U.S.

Joining us now from Paris to analyze the French presidential election, is Renaud Lambert. Renaud is an editor of the monthly paper Le Monde diplomatique. Thanks for joining us, Renaud.

SHARMINI PERIES: So, Renaud let’s begin with the recent scandal, which is causing so much havoc for the center-right candidate, François Fillon. It appears the he will have to drop out, do you think he will drop out?

RENAUD LAMBERT: Well, it certainly is wreaking a lot of havoc to this man who put himself forward as a model of transparency, of honesty. He was going to cleanse the political scene in France. And, of course, as you said, the fact that he most probably has paid his wife on public money — is looking very bad.

Now, I will not attempt to say what will happen in France, ’cause the situation in France is similar to the situation across the world at the moment, and pretty much no one can tell what is going to happen. But is difficult to see how Fillon will be able to stay candidate. There are plenty of others ready to take his place.

SHARMINI PERIES: Right. Tell us a little bit about François Fillon’s party, and if he drops out, what will happen? Will they just appoint another candidate? And what does this mean for the center political parties in France?

RENAUD LAMBERT: Yeah. Well I think, looking beyond the scandal, one to has to take a look at the broader picture. And I think what we have witnessed over the last couple of months in France, is a similar trend both to the left, with the Socialist Party, and to the right. Because it’s not really the center-right, it’s the right with Les Républicains. And the same phenomena has happened, it’s a double movement of polarization, combined with an attempt to renovate a discredited system from within.

When I’m talking about polarization, what it means is that during the primaries, both the left and the right have chosen candidates to the margins with a radical platform. But they are, at the same time, very loyal to the system. And what we see is a rejection of what has been called by Perry Anderson, the extreme center, that worked on the consensus for years now, but at the same time, an attempt to save the status quo. And both Hamon, candidate for the Socialist Party, and Fillon, were an embodiment of this double movement.

SHARMINI PERIES: Renaud, what’s happening to François Hollande in the Socialist Party in this presidential campaign? He obviously cannot sit for a second term, but what is happening to his party, which is very unpopular at this time?

RENAUD LAMBERT: François Hollande, his presidency was the closest we have got in recent years to a disaster in France. His polls were so low, that he decided not to be candidate for a second mandate, which is very rare in France. His party, the Socialist Party, has organized a primary, and similarly to what has happened to the right with the selection of Fillon, a radical candidate was selected, Benoît Hamon, with a platform that tries to present a different face of the Socialist Party.

But basically, the party is trying to pull the same trick as during the last election of 2012. During that time, François Hollande explained to the people who were about to vote for him, that finance was his main enemy. And once in power he governed in favor of finance. And they’re trying to do exactly the same thing, saying that, you know, they are a plural party, there are different sides to it and they’re trying to put forward a red looking candidate.

SHARMINI PERIES: All right. And then on the far right, who we have, the Marine le Pen, how popular is she? What are the chances that she’ll gain momentum during this campaign?

RENAUD LAMBERT: She is very popular, of course. And the crisis we are witnessing at the moment, economic crisis, political crisis, institutional crisis, with the scandals we started with, is going to help her for sure. Now one element came out recently, and I think wasn’t really noticed. She gave a clue as to what would be her platform from an economic perspective. And basically she’s very similar to Trump.

What she is, she’s against immigration and she says she’s in favor of wage earners, but basically she’s in favor of local capitalist. National capitalism is what she’s standing for. And in terms of labor regulations, she’s not purporting to defend the people who have been led to believe that being anti-system, she’s in favor of them. She would be standing for their social rights and for their working rights. So, I think, the picture is becoming clear as to what she stands for. But still her popularity is massive in France.

SHARMINI PERIES: And then, on the left, the Socialist Party candidate, who has been compared to Jeremy Corbyn of the Labour Party in the U.K., or Bernie Sanders here in the U.S., but at the moment there is also another left candidate, Jean-Luc Mélenchon. Tell us about what this split will mean in this presidential election.

RENAUD LAMBERT: Yeah, it’s unfortunate for the left that the Socialist Party chose a leftist candidate. ‘Cause obviously people will have to choose, are they going to vote for what used to be the main left party, the Socialist Party, or are they going to go for Jean-Luc Mélenchon? I think the choice is a crucial one. As I said, Benoît Hamon, the candidate for Socialist Party has nothing to do with Jeremy Corbyn or Bernie Sanders. He refused to vote against the French government, who was from the Socialist Party, when that government tried to introduce a massive overhaul of the French work regulations. So, the man is very careful, to the very last extreme of what he can be within the system.

It’s not all about what it’s got to do with the election. Once election is won for the left, the left would have to put up a fight against the European Union, against Germany, and against the media, against the private sector. And I think there is absolutely no way Benoît Hamon would be standing up for that fight. Jean-Luc Melenchon, on the other hand, has better chances of trying to do it. And, then again, you’ve won the elections, you’re trying to put up the fight and you might find yourself in a situation similar to the one Tsipras encountered, when he was elected Prime Minister in Greece. So, for the left, the situation is a difficult one.

SHARMINI PERIES: Right. And then what can we draw from the various rightward shifts that are going on, both in Europe and here in the United States, when it comes to Donald Trump’s candidacy, or Theresa May’s win with the Brexit, in the U.K.? What do these experiences tell us about what might happen in France during the campaign, and who might win?

RENAUD LAMBERT: Well, I think all these events are a reflection of a similar trend across the world, whereby, those parties that were so close that they implemented exactly the same policies, the Socialist Party and the traditional right wing parties in France, the Democrats and Republicans in the United States, those parties or factions of those parties that embodied the extreme center are being battered.

So, in France we see a rise of Marine Le Pen to the right, and a rise of Jean-Luc Mélechon and politics are to the left of what used to be that extreme center. And I think at the moment the world; people are trying to find a balance. They are sure they want to get rid of the people who have governed them for so long. And I think some of them are getting confused. Some people might have voted for Trump because they think, “Well, protectionism is going to help me get a job. It might help my company stay alive.”

But, I think protectionism can be a two-faced medal. It can be used to protect wage earners against bosses, and I think that that would be fine. But it can be used to protect local bosses against foreign one and that’s very similar to xenophobia. And I think these are the two options that are put forward at the moment, to try and mend a system that has been chaotic, you know? Trying to find an enemy that is not the private sector, so people can focus their anger against the other, the foreigner, the person that’s trying to come in to your country to earn a living.

SHARMINI PERIES: All right, Renaud, I thank you so much for joining us today and look forward to having you back. Next time let’s talk about Venezuela.

RENAUD LAMBERT: Sure. Thank you.