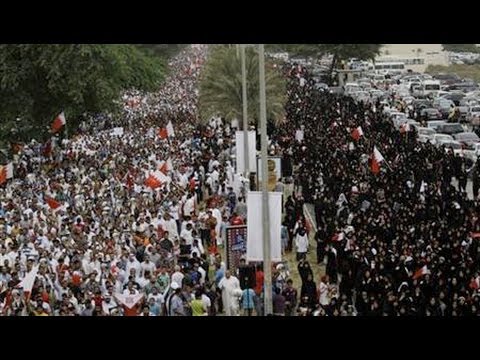 As much of the world’s attention focuses on Syria, there’s little attention on Bahrain, where protests continue, and so does violent repression of those protests. Protests continue every day. There’s also a new factor in these protests. According to The New York Times, the slogans are increasingly more anti-U.S., denouncing or condemning U.S. policy for arming and supporting the Bahraini dictatorship. And as we move into this year, the government of Bahrain moved towards a kind of union with Saudi Arabia.

Now joining us to talk about all of this is Reem Khalifa. She’s a independent Bahraini journalist. She contributes to international wire services and local media. And she’s been on The Real News several times before. Thanks very much for joining us, Reem.

JAY: So let’s just start with what’s been happening recently on the streets, and then we’ll get more into the bigger picture.

KHALIFA: The major event that happened last Friday: when the opposition leaders and societies in Bahrain, they decided to go on a peaceful rally. But the authorities prevented them from going ahead by attacking them, by firing tear gas, hand grenades, and rubber bullets. And this caused some injuries among the head of the largest political society, Sheikh Ali Salman, and also another leader from another liberal society, Hasan Haddad .And also there wasâ€”one young man was hit by his head by a tear gas canister, which caused that he’s still in his critical condition, and [incompr.] we did not know enough information about his situation yet, except that the security forces in the incident that it was distributedâ€”I mean the video in the social media shows very clearly he was taken to hospital, and then he had an operation for four hours, and, you know, some of his relatives and that, they were not allowed to enter and see him.

But I have to say one more thing, that there is daily clashes. We witnessed that in various areas in around the island, between youth protesters, whichâ€”they named themselves February 14. And as well weâ€”between the protesters and the police. As well, we see too many actions happening and calls in the social media. As you see, it became a trend now in the Arab world since the Arab Spring, and entering this, the Arab Awakening period now, they use it a lot as a way or as a tool to spread the events and the principles or the values that the youth would like to [incompr.] in this particular time.

KHALIFA: In the past three months, we started to see some of the protesters carrying slogans, anti-U.S. slogans. And also we see some of them criticizingâ€”you know, there’s the statements coming out from the U.S. officials [incompr.] they say, like, you know, it’s a double standard between Bahrain and Syria. Syria is different and Bahrain is different. It’s not only that. Even in previous press conferences held by the opposition members, they were, like, saying there’s no difference between a small tank and a big tank in Bahrain or in Syriaâ€”they all have the same mentality when it comes to, you know, people’s rights. And these regimes in the region, they don’t really believe in human rights, and which is universal principles and rights, asâ€”President Obama keeps saying that all the time.

Yes, well, recently, yes, we’ve started to see that, and it’s increasing after when the Americans sold arms to Bahrain. And this made especially the youth the street very much angry. As well, you know, the political parties, as they described, you know, the violence is increasing. And since, you know, the people going on peaceful rallies, and they are unarmed, the other ones were getting the attack, while, you know, the security forces have all kind of equipment that attacked them, especially that we have, daily, you know, tear gas smoke in residential areas. And this caused big number of deaths in the past 16 months.

KHALIFA: Well, Bahraini people went on a mass demo rejecting the idea of unity with Saudi Arabia. I mean, they said, we don’t mind having, you know, a unity that’s focused on solving a major problem like unemployment and other things. But militaryâ€”unity based on military or on security goals or aims, that’s the thing that they don’t want to have.

And, you know, I have to clarify something, that in 1971, Bahrain had a referendum with the UN when Iran called to take Bahrain to be part of Iran, and the Bahraini people made it very clear, especially among the Shia majority, that Bahrain is an Arab, independent state and they don’t want to be, you know, part of any country in the region. And the same thing. And then there was, like, an international referendum, and it wasâ€”they respected the will of or the wish of the Bahraini people. And this time as well, Bahrainis were saying in the demo, whether young or old, that Bahrain is not for sale and we will not be part of any regional country, we have to solve our internal problems [crosstalk]

JAY: But the Bahraini monarchy is committed to this, are they not?

KHALIFA: Well, the government is very much keen on that. We see too many columns and articles pushing for that. But I have to say as an observer, we saw rejection coming from even member of the Gulf Council. Like, Oman, for example, was rejecting this very much, and other countries. So the idea of having the unity, whether between Bahrain or Saudi or the whole GCC, is not really serious issue for even ordinary people from the Gulf region.

JAY: What have been the effects on both the elite and ordinary public opinion to the events in Egypt, the recent elections?

KHALIFA: Obviously Egypt is a big Arab country, and anything will happen in Egypt, it would beâ€”it will have a strong impact on small countries in the region, like Bahrain and others. Yes, of course what happened yesterday was a big victory for the ordinary Arabs, you know, especially in the streets. You will find many were happy that who won at end is the youth, the revolutionary people, the people in the street, actually, who wanted to have a president elected which looks like them, and to say to the whole Arab world, it’s time for us to change. This is a very strong message, passing it to the whole Arab world. And it could terrify many, many other countries, or they don’t really welcome having a president who comes even from a Muslim Brotherhood background.

But, you know, these groups, for a very long time, it’s the same issue in other Arab countries, like Bahrain and others: if you just keep denying the fact that there is a big group of people who would like to be part in the political, you know, decision or operation, you should allow everybody to have the chance. And you have to allow this. This is the democratic system.

JAY: A lot of the, you know, revolutionaries in Tahrir Square, you know, have kind of mixed feelings about all of this, ’cause they don’t think the new president’s really going to take on the military. But what you’re saying, if I understand it correctly, is even if he isn’t such a radical departure, just the fact that there’s an elected president, when you’re talking these monarchies, is a threat to the regimes.

KHALIFA: It’s how the people, they feel. I mean, it will be a hard job, it’s not an easy thing, because everything is new in Egypt and for the Arab world. Obviously, the Arabs look in a different way, Egyptians more ambitious. And I’m sure among the young people, who moved for the revolutionâ€”.

JAY: And just back to Bahrain now, Reem, there was an investigation into the repression and violence that took place last September, and the report came back. And if I understand it correctly, the report actually quite condemned the police and the level of repression, and people thought perhaps something in terms of reforms would come out of that. So has anything changed? What was in the report, and has anything changed since it was released?

KHALIFA: Not much. I have to say, you know, the opposition and the people and the civil societies’ members, they were very much hoping thatâ€”the BICI report recommendations to be implemented clearly, and plus with the UPR recommendations, which also was issued last month in Geneva. This could be a start, as the opposition said that in their press conference yesterday, clearly, that we’re still waiting for the promises that was given by the government to implement, and then to start a reconciliation and a dialog thatâ€”even the whole world is pushing for that. But still they’re not seeing anything.

And yesterday, I have to highlight that the government and the king have said that Bahraini affairs are internal matters requiring no mediation from outside, which is okay, but there are many problems we have in Bahrain that still need to be fixed. And the opposition keeps saying that what’s happening in Bahrain is that the government doesn’t want to admit that there is a political problem and doesn’t want to compromise. But if you will just ask any ordinary Bahraini, he will tell you we are really fed up, we really want to have this dialog to happen and to admit that we do have a problem that needs to be fixed, because everybody is tired.

KHALIFA: Thank you, Paul. Thank you very much.