What’s Next for Palestine?

Raja Khalidi begins a series discussing the role of Qatar, unity of Hamas and Fatah and the prospects for Palestinian development as Israel's position hardens

Raja Khalidi begins a series discussing the role of Qatar, unity of Hamas and Fatah and the prospects for Palestinian development as Israel's position hardens

What's Next for Palestine? 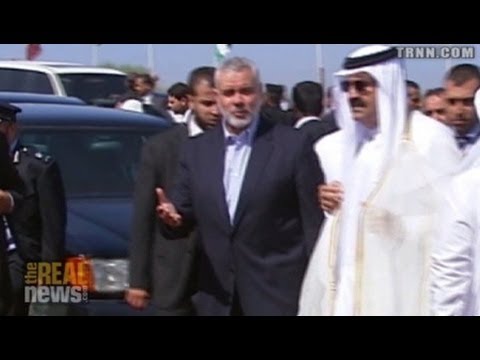 In the Middle East, moves are afoot, to a large extent led by Qatar and its emir. He was in Gaza recently, and he seems to have made a deal,

some people calling it a shotgun marriage, where Hamas and Fatahâ€”Hamas recently moved its head offices to Doha, and now we have a

sort of peace agreement. We’re told by our journalist in Gaza, everywhere you see a Palestinian flag, there’s a Qatari flag flying next to it. And

Hamas is actually allowing people to protest, carrying the portraiture of Abbas, Abbas the head of Fatah and the PA. It’s a very interesting

development, including the Muslim Brotherhood in Egypt, which seems to have managed the peace agreement with Gaza in a way that has

Now joining us from Geneva is Raja Khalidi. He’s spent most of his professional career with the UN Conference on Trade and Development,

UNCTAD, where he’s currently chief of the Office of the Director, Division on Globalization and Development Strategies. And I have to point

out, the opinions he’s about to express are primarily his own; they’re not necessarily those of UNCTAD. Thanks for joining us, Raja.

RAJA KHALIDI, SENIOR ECONOMIST, UNCTAD, GENEVA: Nice to be with you.

JAY: So, first of all, what do you make of what’s going on, in terms of the UN recognition of Palestine as a nonmember state? And just what

KHALIDI: When you ask what sort of state we can expect to come out of this, I don’t think any stateâ€”I don’t think from theâ€”I mean, at least

from the status of the peace process, I don’t think we can expect any state to come out of this.

We haven’t seen a change in Israel’s position. On the contrary, we’ve seen a hardening of the Israeli position regarding settlement of the West

Bank. We haven’t really seen anything in the way of a durable ceasefire. As a result of the Gaza conflict, we haven’t seen a relief of the siege of

Gaza. So people in Gaza haven’t really felt anything new as a result of a very hard-fought and widely publicized battle.

So, I mean, as I said, I think the prospects for a Palestinian state haven’t looked good for a long time, and they don’t look any better, to me, at

least, today as a result ofâ€”notwithstanding the diplomatic, military, if you wish, and regional diplomatic sort of pluses that the Palestinians

have chalked up in the last few weeks.

JAY: A Palestinian friend of mine, his theory of what’s happening here is: Qatar, together with Saudi Arabia and in cooperation with the

United States, the sort of plan is to develop the economy in Gaza and the West Bank and develop Gaza in a way that it becomes more and

more integrated with Egypt, and Egypt under the Muslim Brotherhood sort of manages Gaza. And in the West Bank, again, investment from

Qatar and others develop the economy there in a way that strengthens the links with Jordan. He saw the whole thing as sort of theâ€”his quote

was this is the end of the Palestinian project.

KHALIDI: The first person to say that was, I think, a Palestinian scholar in 2005, who said that with Arafat’s death, the Palestinian national

movements would start to come apart. In many ways, the last five years, six years have seen that sort of a disassembling of what was

and Ramallah, two different, separate Palestinian political entities, if you wish, political systems. And everything else we’ve seen in the way

of disunity, if one can use that word in the Palestinian political and geographic and economic and international and regional relations sort of

more readily than it has, let’s say, in some better periods, i.e. periods where things were looking up, the Oslo period, for example, or even the

last few years in the West Bank, that it’s going to somehow transform the economic prospects, I think, is unlikely. You know, there’s very little

what we callâ€”in Arabic we use the word [incompr.] brave capital, courageous capital that’s willing to really put its feet down in Palestinianâ€”

in investing in Palestine. So, there’s a

Palestinian capital out there that could come back. So I don’t see a major, resource transfusion.

We heard about this socialâ€”this safety net, financial safety net approved by the Arab League. Basically, it’s saying that, if the Israelis cut

off the tax revenue that’s due for transfer to the PA, the Palestinian Authority, then the Arabs will step in and foot the bill, which is really,

almostâ€”, which is a good safety net for a short period, but it’s not really a sustainable one. In Gaza, you’re right, there was thisâ€”there were

major pledges for infrastructural development projects, and I think from Qatar prior to the last fighting. And those might actuallyâ€”, now, in

fact, there’s probably even more to reconstruct than there was before.

But I don’t think that, that’sâ€”again, we’ve had these spurts in Palestinian economic history of either donor-funded or remittance- (in some

cases) funded or labor fromâ€” wages-from-income-funded growth spurts, which led to, in some cases, some prosperity here and there, what

we’ve called in UNCTAD, individual prosperity and communal impoverishment. And we could see the same sort ofâ€” especially in Gaza,

because I don’t think the West Bank has that, is reallyâ€” has anywhere to grow, whereas Gaza has a lot, still, to recover from. There’s a lot of

major infrastructural and social expenditures that could be envisaged there.

And that willâ€” that could delay certain things, but we’ve always seenâ€”the thing comes back and bites any economic piece or any, prosperity

booms in the rear very badly. And it’s happenedâ€” it happened in 1987 with the First Intifada. It happened again after Oslo twice, both in the

So, I mean, I think that the main issue is mainly occupation, lack of sovereignty, extremely limited, if any, economic policy space, even for the

Gazaâ€”government in Gaza, especially for the PA, in terms of itsâ€”the nature of its economic agreements and security and Oslo and Paris so-

called agreements with Israel. I don’t see anything yet that’sâ€” with all of the links that might exist between the Hamas, Palestinian, Muslim

Brotherhood, Egyptian, and others, there are other very important forces at play.

The Iranian support forâ€”the military support that has reached Gaza can’t be discounted. There’s a situation in North Sinai of lawlessness,

which the Egyptian government hasn’t got a handle on and I think, worries Israel, and even worries Hamas, because it’s a Salafiâ€”sort of

armed Salafiâ€”not insurgency, but lawlessness, as I said, in the northwest Sinai. And then you have everything that’s happening in Syria and

Jordan in terms of regime change or potential reform, constitutional reform in Jordan.

rights, is Israel. And, we haven’t seen any moves except, further consolidation. This extraordinarily sensitive settlement plan in this area

east of Jerusalem, E1, is certainly notâ€”not to mention the tax issue, the revenue withholding. I mean, that could go on as a short-term

punishment, but I don’t think the PA can live with it for very long.

And already I think President Abbas, when he addressed the Arab League the other day, unfortunately, I think this has given us an example

of the limitations of the stateâ€”status of being a state that the PLO is accorded in the UN is that he announced to them, he says that we’re

fast approaching becoming a collapsed state, basically, probably the fastest failed state in history, between November 29 andâ€” only because

we have one month of Israeli channeled tax revenue withheld. And that’s problematic. I mean it’s problematic when you talk about state

institutions that are supposedly there ready to function, and all that is needed is the magic wand of a political agreement. That’sâ€” that’s more

JAY: Okay. So, in the next segment of our interview, let’s talk further about just what kind of economy is going to be built in Palestine and

Egypt, other countries of the Arab Spring. People were demanding democracy, but not just political democracy. People want something in

terms of their economy. So please join us for the next segment of this interview on The Real News Network.

DISCLAIMER: Please note that transcripts for The Real News Network are typed from a recording of the program. TRNN cannot

Raja Khalidi has spent most of his professional career with UNCTAD, where he is currently Chief, Office of the Director, Division on Globalization and Development Strategies. He holds a B.A. from Oxford University and M.Sc. from University of London SOAS. From 2000-2006, Mr. Khalidi was Coordinator of UNCTAD's Programme of Assistance to the Palestinian people,…