Government Shutdown Spares Military but Hurts Children and the Poor 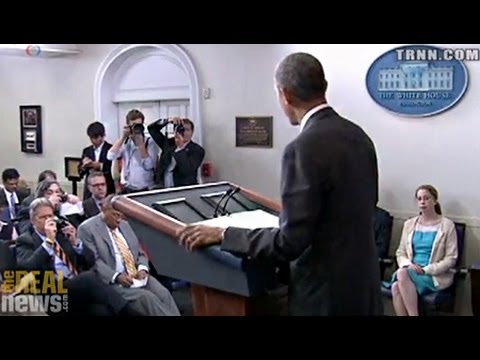 With no end in sight, the government shutdown has entered its third day. President Obama convened with Democratic and Republican congressional leaders at the White House Wednesday in the highest-level effort yet to end the budget impasse, but failed to agree on terms for a new federal budget.

Hundreds of thousands of federal workers have been placed on unpaid leave, and numerous government programs have been cut.

The government shutdown, however, does not impact all departments equally, and according to our next guest, the programs slated for closure reveal much about our nation’s priorities.

Now joining us is Rania Khalek. She’s an independent journalist reporting on the underclass and marginalized. Her work has appeared at The Nation, Extra!, Salon, Truthout, and Al Jazeera America.

RANIA KHALEK, INDEPENDENT JOURNALIST: Thanks for having me, Jaisal.

NOOR: So, Rania, give us some examples of what will stay open during this government shutdown and what will remain closed.

KHALEK: Well, what will stay open and functioning are probably what in my opinion are the worst aspects of the government. So, for example, deportations will continue largely unimpeded. The same goes for–drone operators will continue to go to work. So drone strikes will likely continue, as well as surveillance drones on the border. The DEA will continue to function, the FBI. NSA spying programs will continue.

And then when you compare that with what’s actually being impacted the most, it’s really revealing on what our government–in the way our government prioritizes things. For example, children, low-income children, low-income mothers, and low-income pregnant women who depend on WIC, which is the program–the food program for low-income mothers and children under five and infants, that program basically stops getting federal funding. So they have to rely on state funding, which won’t last longer than a week is what the estimate is.

And then there’s also other really, really important programs, like the CDC has been cut down tremendously and says that they won’t be able to respond to outbreaks. Their capacity to respond will be significantly reduced. The FDA food safety inspectors will be furloughed.

So, yeah, it’s just–when you look at what’s continuing to be funded and what’s not, it’s really interesting, because the government says that we’ll continue to fund programs, services, and employees who are essential to protect human health and safety, but, yeah, it doesn’t really add up when you look at what’s actually happening.

NOOR: And what can you tell us about how the decisions were made about what would be cut and what would stay open? And you argue this reflects our values as a nation.

KHALEK: Well, so each agency, from what I understand, was responsible for determining how to apply guidelines that were given to them by the office of government personnel, I think it’s called. But yeah, basically the guidelines say that, you know, the employees who will continue to go to work are those who are basically essential to protecting the health and safety of the population as well as property. So that’s pretty much the guideline, and it’s up to agencies to apply that.

And so it’s when–whether you’re looking at, you know, Homeland Security or the Justice Department, I mean, even though those areas, it’s–like, again, like I said, with DHS, its deportations are being prioritized, whereas, you know, civil rights and civil liberties training for law enforcement is basically being shut down right now, and as well as inspector–or as well as regulation or the regulators for chemical plants, which is kind of important, in my opinion.

And when you look at the DOD, it’s similar. It’s–the one area, the one office in the Department of Justice that’s actually being shut down completely, so 100 percent of employees are furloughed, is the Office of the Pardon Attorney.

Then, you know, for–but, you know, other offices are–or it just–it seems as though the programs that are the most abusive to civil rights and civil liberties aren’t being impeded whatsoever. And I think when you look at, you know, how unequal it is and how disproportionate it is when it comes to what’s being funded and what’s not, I think it definitely reflects not only what’s important to the government, what’s important to us as a nation, but also there are certain people that we just don’t value that much, or at least the government doesn’t value that much, and those are poor people who depend on government assistance to, you know, feed their children. And those are, I guess, all of us, in a sense. I mean, when it comes to the Environmental Protection Agency, for example, almost [incompr.] almost entirely shut down right now. They make sure our water is clean enough to drink and they monitor air quality among many other things. And so, I mean, these are the things that we’re saying aren’t essential when compared to deportations and drone strikes. So, yeah, I think it definitely reflects that, you know, war and spying and surveillance and all these really abusive programs are much, much more important than, you know, protecting the masses and providing services for the most vulnerable in our society.

NOOR: And it almost goes without saying that members of Congress will continue to collect paychecks regardless of how long the government stays shut down.

KHALEK: Yeah, except, of course, their staffers will not. But, yeah, they will.

And that’s another thing, too, is even the employees who are continuing to go to work, there’s no guarantee that they’ll continue to be paid. So there are some employees who might end up working without getting paid. And, I mean, that’s awful too. It’s affecting, like, what, 800,000 workers, 800,000 federal workers. That’s a lot of people who I’m sure depend on their paychecks to pay their bills and to, you know, pay their rent or their mortgage or, you know, buy their children food, and, yeah, that’s important too. It–just it’s fascinating to me that the people who are being affected the most have no say in what’s going on.

KHALEK: Thanks for having me, Jaisal.