Thanks to Gov. Corbett, Philly Schools Open Overcrowded and Understaffed

State control of Philly's public education has been a disaster

State control of Philly's public education has been a disaster 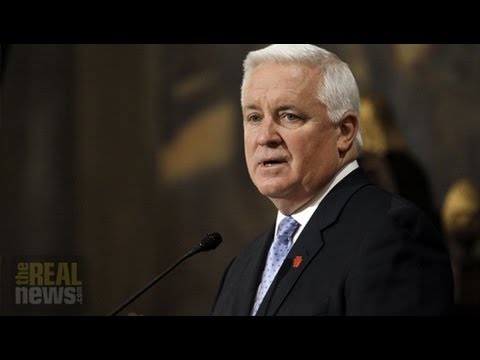 When Philadelphia public school students returned to class earlier this month, they were attending a district wracked by the firing of thousands of employees and the shuttering of 23 schools due to an over $300 million budget deficit.

Now joining us to discuss this is Rania Khalek. She’s an independent journalist reporting on the underclass and marginalized. Her work has appeared in AlterNet, Common Dreams, and In These Times magazine. Her recent piece for Truthout is titled “The Systematic Murder of Philadelphia’s Public Schools”.

RANIA KHALEK, INDEPENDENT JOURNALIST: Thanks for having me.

NOOR: So, Rania, you’ve been reporting extensively on public education across the country. And we’re going to start our series of interviews with you in Philadelphia, which is perhaps or maybe undoubtedly the school district in the greatest point of crisis around the country. Can you describe the scale of what Philadelphia’s going through right now?

KHALEK: Yeah. So, like you mentioned, there were thousands of teachers, almost 4,000–not just teachers–teachers, counselors, school aides, secretaries, assistant principals that were laid off at the end of last school year. And there has also been 23 Philadelphia public schools that were shut down this year. So students went to very different–the year just started, and the year’s already very different than it was before.

Philadelphia public schools are very dramatically underfunded. They’ve been financially starved for years–like you mentioned, over a $300 million right now of a deficit. And so the school closings and the laying off of pretty much every possible imaginable person that’s necessary for a school to function is basically being justified by the fact that there isn’t enough money. And a lot of that’s true.

But, you know, what you have in the end is you have students who literally–I mean, they don’t–they’re going back to schools where there’s larger classrooms. There’s no extracurricular activities. I mean, almost everything the program has been cut–arts, music, sports, and counselors. I mean, one of the biggest problems right now is there’s no counselors. I mean, there’s–one school was able to get one of their counselors back, and it’s, like, one counselor for 1,200 students. And if you think about it, I mean, think about being a senior in high school and how much you really, you know, depend on your counselor to help you applying to colleges, I mean, it’s just–it’s really a mess. It’s a nightmare scenario for Philly public school students right now.

NOOR: And many of these students are the highest needs students, the most underprivileged that are getting the brunt of these cutbacks. Can you talk about just how the process of the school–that the schools were closed and the layoffs happened? It can’t exactly be described as democratic.

KHALEK: No, not at all. In Philly–and this is something you see around the country in these cities where a lot of schools are being shut down and defunded–is there’s no democratic control over the school system. There’s either mayoral control like you have in Chicago and D.C. or like in Philly–Philly public schools are under state control. Mostly there’s what’s called the School Reform Commission, which was put in place in [incompr.] 2002. It’s basically made up of five individuals, three of which are appointed by the governor, and the other two are appointed by the mayor. And they’re accountable to nobody. I mean, they’re not elected.

So the people of Philadelphia, I mean, there’s no way that the city would be able to implement these kind of draconian policies towards education if the people of Philadelphia had any say, because they are adamantly opposed to the defunding, the dismantling of their public school system. So, yeah, this entire structure of shutting down schools is completely dependent on an undemocratic, very authoritarian process.

NOOR: And some have described this as a crisis that was man-made. Talk about the state’s role and the governor, Tom Corbett, a Republican governor, what his role has been in this crisis in Philadelphia.

KHALEK: Yeah. So Pennsylvania is a unique state. It’s one of a handful of states that doesn’t have a funding formula for how they fund public education throughout the state. So in Pennsylvania, because of that, actually spends, like, the least amount of money in proportion to other states around the country. It’s, like, one of the last–one of the least–there’s, like, ten states that spend very little money–and Pennsylvania is one of them–on public education. So it basically forces school districts to rely on federal funding and local property taxes.

So what happens is for poor districts like Philadelphia that don’t have as high property taxes or there’s not as much homeownership, so not as many people are paying property taxes, you have fewer funds. And so this obviously dramatically affects public education. And that’s one of the reasons you see such a deficit every year with Philadelphia public schools.

On top of that, you’ve got a Republican governor who every single year since he’s been in office has, you know, cut a huge chunk of the state’s public education budget. And so that severely impacts districts like Philadelphia that are already struggling to get by. So that’s why you see this really, you know, severe scenario right now where there’s thousands of teachers and, you know, counselors and teachers aides that have been fired and schools closed, because, like I said, the district, despite being financially starved, a lot of that is because of the state.

NOOR: And, finally, you know, this isn’t going down without a fight. Can you talk about what teachers and students and parents are doing to challenge these policies?

KHALEK: So Philadelphia is really unique also because it’s got a really vibrant community of residents who are adamantly opposed to education, to the corporate education agenda, I guess you could call it. There’s, you know, the student–the Philadelphia Student Union has been on top of this. It’s–they’ve done student walkouts, they’ve coordinated student walkouts. There’s teachers, the teachers union. There’s also teachers organizations that have been involved. And there was–you know, when the counselors were fired at the end of last year, there was–they did this really, really great campaign where they basically, like, promoted various counselors and talked about, like, the personal–the way that they personally help students that they’ve worked with. There was also a hunger strike that involved, you know, teachers and parents late last year. And, you know, this activism is continuing. And there’s protests all the time. There’s–you know, it happens all the time. There’s protests outside of the School Reform Commission. Whenever they have meetings, there’s constantly this activism going on, this organizing. So it’s really–that part’s really, really exciting. It’s just difficult for them to have an impact when the people making these decisions are not accountable to the residents.

KHALEK: Thanks for having me.

NOOR: And this is just the first part of our series of interviews with Rania about her work. Go to TheRealNews.com for that full collection. Thank you so much for joining us.