Rania Khalek: School closings in DC and across the country have not improved educational outcomes.

Rania Khalek: School closings in DC and across the country have not improved educational outcomes. 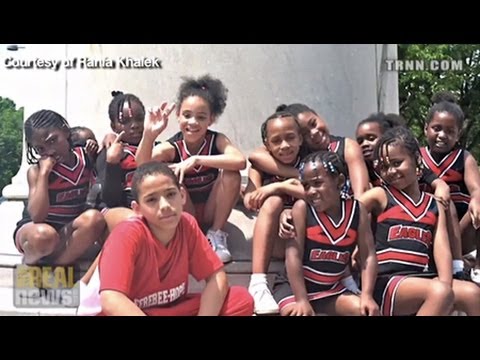 Not too far from here in the nation’s capital, Washington, D.C., there are plans to close 15 of the city’s public schools by the end of 2014. But community members are fighting back against plans because, as our next guest argues, the closings disproportionately affect minority and special needs students, and there’s no evidence the plan will improve educational outcomes or save the district money.

Joining us to discuss this is Rania Khalek. She’s an independent journalist reporting on the underclass and marginalized. Her work has appeared on The Nation, Extra!, Salon, Truthout, Al Jazeera America, and more. Her recent piece for Truthout is titled “Racist School Closings in Washington, D.C.”

RANIA KHALEK, INDEPENDENT JOURNALIST: Thanks for having me on to talk about this.

NOOR: So, Rania, supporters of school closings, which, again, are happening all over the country in almost every urban school district, argue that this is the only way or one of the only ways to take decisive action and help students who are trapped in so-called failing schools, or these closings are necessary to address budget deficits and will improve educational outcomes. What’s your response? What have you found in places like Washington, D.C.?

KHALEK: Well, it’s really interesting, because a few years ago, in 2008, under then chancellor Michelle Rhee, Washington, D.C., closed 28 schools, 28 public schools. And the same argument was used, that it was going to save a ton of money, that it was going to help students at failing schools, they would be sent to better schools.

And what happened was actually just the opposite. It–not did it only not save money; it actually ended up costing something like $40 million, which was four times what they said it would save. And on top of that, it’s–the students who were sent to different schools whose schools were closed ended up going to schools that were just very, very similar to the ones they were already at or were even worse-performing schools. So just based on that, there’s absolutely no evidence showing that their reasoning makes any sense.

And, you know, on top of that, there’s also the fact that last time around when they did it, there were certain rival schools that were–one of them was shut down, and then the two schools or two rival neighborhoods were sort of combined into one school. And what happened was at one middle school they actually had to call in the police in 2008 because violence just erupted, because you had, you know, two rival neighborhoods going to the same place. And, I mean, it was crazy. There were students running around with fire extinguishers shooting them at each other and at teachers, and it was really awful and it was really embarrassing for D.C. at the time. So that’s another thing that’s, you know, been worrisome about these schools, this round of school closings as well, is it’s as if they haven’t learned anything from last time around.

NOOR: It seems like–and, you know, I’ve been following this closely in places like Chicago and New York, but it always seems like these decisions are being made with virtually no consideration on how or what impact this is going to have on the community. And you saw similar things in Chicago around concerns of gun violence, and that helped take one school off the list. But, you know, 50 other schools were still shut down in Chicago. Can you talk more about where geographically the schools that are being shut down are located and why it’s important to discuss that?

And, I mean, D.C. is a very segregated city. So, you know, the white areas have been left untouched. There was a couple of schools, or at least one, I think, that was in one of the wards where it was in a white neighborhood, but the parents were able to lobby against it, they were able to organize and, you know, protest against it, and it worked, and that school was taken off the list.

But, you know, parents in low-income areas don’t have the same luxuries that, you know, middle-class parents might have. So, I mean, they’ve definitely been involved in organizing against this, but they just don’t have as much of a voice in D.C., as poor people of color usually don’t in certain cities. But, yeah, it’s definitely–I mean, there–it’s something like over 90 percent of the students being affected are black, low-income, and they all go to schools where 90 percent or more of students are qualified for a reduced free lunch. So this has definitely been targeted towards the poor black community in D.C.

NOOR: And can you talk more about what the next steps are going to be for the community activists and teachers and parents and students that are fighting these school closures? You mentioned in your piece that Empower D.C., which is a local grassroots organization, was fighting the closings in court. Can you also give us an update on that lawsuit?

KHALEK: Yeah. There’s been tons of organizing residents, parents, students. There has been a lot of strategizing. They were–a lot of people were involved. Empower D.C. led this lawsuit of parents against the city, saying that the school closings were racist. And that lawsuit is still pending.

I’m not sure when it’s coming up for review or when it’s going to be resolved, but in the meantime, 13 of the 15 closings still went ahead this year. Two of the schools that haven’t been closed yet are supposed to close next year, are actually schools that are specifically designed for students with disabilities. That’s another part of the lawsuit is that this targets students with disabilities, which, you know, is supposed to be–which are supposed to be protected from this kind of discrimination. So, in the meantime, yeah, there’s–just last weekend there was a strategizing sesison that was hosted by Empower D.C. for parents and residents in the communities being affected. So in the meantime, yeah, they’re still organizing and they’re still protesting and they’re waiting for this lawsuit to go through. So we’ll see what happens.

NOOR: And in our previous segment, which you can watch at TheRealNews.com, we talked about a similar thing happening in Philadelphia, where 23 schools are being shut down. Can you put this in a wider national context, just how–you know, what’s the scale of school closings around the country? And as we’ve talked about, these haven’t really been proven to have any positive effects on the communities in where they’re being implemented.

And, you know, overall it’s like in every single city you go to, it’s the same pattern. It’s the schools that poor communities or that poor students of color attend. So what you see is you see really a dismantling of public education, ’cause a lot of this has to do with, you know, closing down public schools and increasing the amount of charter schools, privatizing education. So you see this dismantling of public education, but it’s being done on the backs of poor children of color, mostly black children. So, you know, we really have to ask ourselves when it comes to public education what kind of country we want to be. I mean, this is happening all around the country.

KHALEK: Thanks for having me.