How did North Korea Acquire the Technology for the Bomb?

Robert Kelley, former director at the IAEA, explains the role of Pakistan as well as what information is needed to know what was detonated

Robert Kelley, former director at the IAEA, explains the role of Pakistan as well as what information is needed to know what was detonated 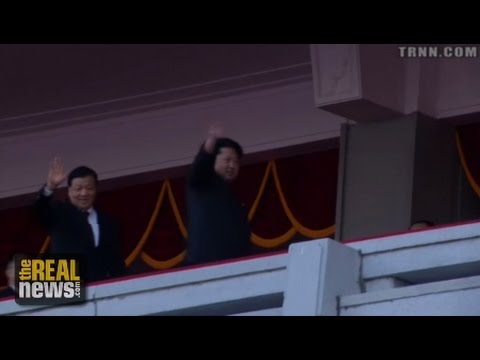 North Korea says it has detonated its first hydrogen bomb. Many experts and officials have raised doubts over whether this fourth nuclear detonation was actually a hydrogen bomb. Here’s what North Korean television had to say.

Since this announcement, the UN Secretary General Ban Ki-Moon denounced it as destabilizing, with the Security Council considering measures against North Korea. In the U.S. the House of Representatives will vote on sanctions in the upcoming days. However, there don’t really question how North Korea got this technology in the first place. BBC is reporting that this technology was acquired by North Korea because Pakistan solid it the technology secretly under the watchful eye of George W. Bush.

Joining us now to give us his analysis of the situation is Robert Kelley. Robert is a former nuclear weapons analyst at Los Alamos National Laboratory, and a former director at IAEA. He joins us from Europe. Thank you so much for joining us.

PERIES: Robert, as I said in my intro, the BBC is reporting that North Korea actually got this technology under the watchful eye of the Bush administration, and they got it from Pakistan secretly. Is there any reason to believe that?

KELLEY: What we know about the test is that there was a large underground explosion with a seismic signature consistent with a nuclear test. The yield of the test was about the same as the third test, back in 2013, and that’s all we know. The young dear leader of Korea did say back in December that they plan to detonate a hydrogen bomb, and bragging then has led some people to think that they detonated a hydrogen bomb. But there’s really no evidence of that.

PERIES: And what information do we need to know exactly what happened?

KELLEY: Well, what would really be good is if you get radioactive debris that was involved in the nuclear test. If you could get samples of particles that were released you could whether it’s plutonium, [uranium]. You could make a determination if it was something [inaud.] boosted or even a real thermonuclear weapon. Without the particulate or some very reliable source information, we’ll never know.

PERIES: And the U.S. says that they have sent aircraft to collect some of the debris. Is that possible? And then where does that go, and how is it tested?

KELLEY: Well there are lots of people out there trying to collect debris. And what they will probably first see is radioactive gases. Xenon gas, which is a fission product from the nuclear test, can leak out of the tunnel where the test was. And that gas is relatively easy to detect. Because it’s radioactive they can make measurements on it. And they can go back and see if it’s consistent with the time and measured seismic.

But the particles of uranium and plutonium fission products don’t leak out of the tunnel very well. And so if the tunnel is sealed properly, experience says they won’t get anything. From one of the North Korean tests, there was no radiation detected whatsoever. So it’s possible they won’t see anything.

PERIES: Robert, explain the difference between an atomic bomb and a hydrogen bomb in terms of how they are produced, as well as the difference in power between them.

KELLEY: An atomic bomb or a fission bomb is fairly straightforward. It splits the atoms of uranium or plutonium, releasing a huge amount of energy in a short period, and that’s your nuclear explosion from a fission bomb.

You can use the energy from a fission bomb to squash a second bomb, which is only located two centimetres away. The second bomb contains uranium or plutonium, and a lot of lithium-6 ion and deuterium. Those are elements that will fuse together under tremendous heat and pressure. They release even more heat and energy, and they release lots and lots of neutrons. And those neutrons will burn even natural uranium, which normally doesn’t burn at all. So it’s a way of getting natural uranium to burn.

So you see this, this [furor] that we’re seeing hydrogen bombs have to be big and terrible is not really true. The reason North Korea would go that way is to make bombs that are about the same size or a little bigger than the one on Nagasaki, but don’t have to give a huge amount more yield. It’s just in a small package.

PERIES: Robert, the big elephant in the room here is how North Korea attained the knowledge and the know-how, as well as the technology, to be able to have such a bomb in the first place. And there was a report in BBC today indicating that Pakistan had sold, secretly sold the technology to North Korea. Is there any grounds to believe that?

KELLEY: Well, I haven’t seen that particular report, but I think it’s well-established that Pakistan sold centrifuge technology to North Korea [in return] for other things. So that report could very well be true. What you have to look at is that North Korea’s now had four nuclear tests. The first one barely went nuclear, the second one was also very small. And the last two have been on the order of 10 kilotonnes, maybe less. So they’re not doing all that well at this point, [inaud.] depending on what their purposes are.

On the other hand, a 10 kilotonne nuclear warhead landing in the middle of the city may not destroy an entire metropolitan area, but look what it did to Nagasaki, and think about how people would not want to stay in that city even if they weren’t part of the damage. They, they would leave. So a 10-kilotonne warhead could effectively negate a metropolitan area.

PERIES: In this report that I was just referring to in the BBC there’s a reference to the fact that Pakistan did sell this knowledge secretly to North Korea, and that the Bush administration knew about it and turned a blind eye. Is there any reason to believe that?

In the case of Libya, we know that Pakistan gave nuclear weapon design to Libya, and they may have also given it to Iran. So there’s quite a market out there, [for the stuff] moving around. The main difference is that Pakistan and Iran and Libya have all been working on uranium bombs, if they’re working on bombs at all. And in the case of North Korea you have a plutonium bomb, which at that time Pakistan didn’t have. So there’s some pretty open questions here, I think.

PERIES: So then, Robert, what’s the difference between Iran having these centrifuges and a country like North Korea having them?

KELLEY: Well, I think the difference is very clear. Iran didn’t get very far, as far as we can tell. If they worked on weapons at all, it hasn’t been discovered. The IAEA has come out with a report saying they find no evidence of it in the last two years. Maybe there was work back in the beginning of the 2000s. So this hysteria in Washington over Iran, and the relative lack of hysteria over a country that’s already detonated four test devices, I find that quite amazing that the Washington establishment isn’t more worried about North Korea than they are about Iran.

PERIES: All right, Robert. Thank you so much for joining us today.