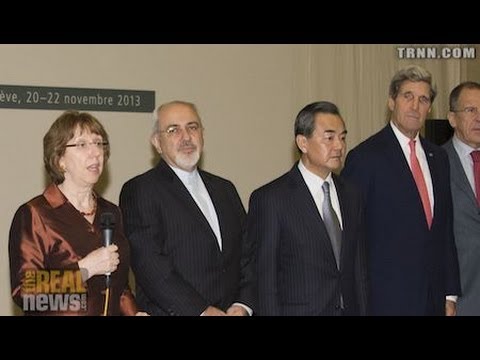 Relations between the U.S. and Iran reached a historic level after a deal was signed on Sunday. The deal calls for Iran to halt most of its uranium enrichment efforts, eliminate its stockpiles of uranium, open its facilities to daily monitoring by international inspectors, and significantly slow the construction of the Arak reactor.

Now joining us to unpack all of this is Robert Kelley. He’s a nuclear engineer who has worked in the U.S. nuclear complex for more than 30 years. He assisted the IAEA as the director in the Iraq Action Team.

Thanks for joining us, Robert.

DESVARIEUX: So, Robert, let’s just break down some of the major components of the deal. We have here from the White House saying that Iran agreed to halt enrichment above 5 percent. Can you explain to us why that’s significant?

You have to remember that Iran has an enrichment program that they don’t necessarily even need at all, but they’ve invested an awful lot of national pride and money in these centrifuges. And it might have even been a weapons program at one time, although it doesn’t look like it. Five percent enrichment now is a level consistent with peaceful power-producing nuclear reactors and nothing more. And so if they hold it down to that level, they’re at least showing good intent to not go above a level that’s only associated with peaceful purposes. Five percent or three and a half percent is typical for power reactors, 20 percent for research reactors, and 80 or 90 percent for a bomb. So this is way below the level needed for a bomb.

DESVARIEUX: Okay. Let’s continue on this list of what’s in the deal. There’s also–they agreed to to neutralize their stockpile of near-20 percent uranium. So does that mean Iran is halting its uranium enrichment program completely?

KELLEY: Oh, no, not at all. They’ve produced a lot of 20 percent material. It’s–technically, it’s 19.9 percent enriched. And the reason for that is for a research reactor that they bought tens of years ago from the United States, and the U.S. will no longer supply fuel for it. So they have, again, coming from a national pride point of view, said, we’re going to make fuel for that reactor. And that does worry people, because it’s getting very close to the level that one would need for a bomb. I know 20 percent doesn’t sound like doesn’t sound like 90 percent, but technically it’s getting very close. So, no, they’re not giving up on the research reactor. But what they’re saying is–or enrichment. They’re saying, we’re going to take the 20 percent material and put it in a form where it’s not ready for further enrichment and [crosstalk] That’s reversible, but it’s a step in the right direction. It’s a step that shows good faith.

DESVARIEUX: What do you make of the daily access that’s going to be given to the IAEA? Do you see this as excessive? Is this unprecedented also?

KELLEY: Yeah, that’s one of the really strange things in this press release, saying that the IAEA won’t have access every day. The IAEA has access right now to the fuel, to the enrichment plants on about a biweekly basis, and that’s enough. The deputy director general of the IAEA said he can detect within two weeks if there [inaud.] facilities. So going every [inaud.] is just excessive. If you think about it, [inaud.] for safety and security reasons, that means that two plants, two people every day is 1,460 inspector days a year. They don’t need those days. And so it’s one of those places where you wonder if some of the details of this agreement have been quite ironed out. I would be very surprised if the IAEA asked for that much access, and I think they’d probably be very unhappy about the cost of it to themselves.

DESVARIEUX: Alright. Let’s look at another point in the deal. Iran also agreed to halt their activities at Arak and any progress on its–this, by the way, is coming from the White House, saying the plutonium track. Can you explain why that’s significant?

KELLEY: Well, two things. I think when you mention the plutonium track, what we’re looking at there is that Iran would never have agreed to that language in any kind of consensus statement. So that’s an indication that this is a White House release, because Iran is adamant in saying, we don’t have a plutonium program. This reactor’s not to make plutonium. So when the White House says the plutonium track, they’re showing a very, very strong U.S. bias.

Now, Israel has been really outspoken for the last few weeks, even a few months, about the Arak reactor being a source of plutonium for bombs. This agreement, as it’s been handed out by the White House, completely stops that Arak [inaud] It stops [crosstalk] It stops the fuel for the reactor and everything else associated with it.

DESVARIEUX: Alright. Robert Kelley, thank you so much for joining us.

DESVARIEUX: And we’ll continue our conversation with Robert Kelley in part two of our interview. So please be sure to check that out as well.

Thanks for watching The Real News Network.

January 14, 2020
Sign Up for Our Newsletter
Help Us Make Real News!