Robert Kelley says framework makes a secret program highly unlikely; Iran is saying they have nothing to hide

Robert Kelley says framework makes a secret program highly unlikely; Iran is saying they have nothing to hide 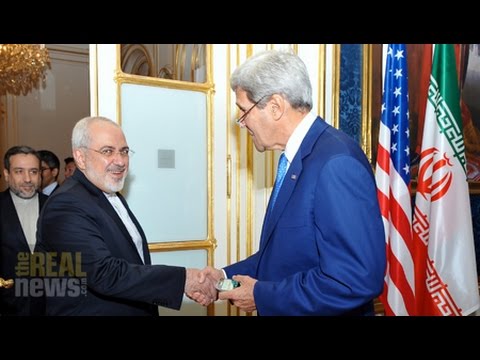 On Thursday afternoon, President Obama outlined the framework of a deal with Iran about its nuclear program.

BARACK OBAMA, U.S. PRESIDENT: This framework would cut off every pathway that Iran could take to develop a nuclear weapon. Iran will face strict limitations on its program. And Iran has also agreed to the most robust and intrusive inspections and transparency regime ever negotiated for any nuclear program in history.

So this deal is not based on trust. It’s based on unprecedented verification.

JAY: Now joining us to assess the agreement from Europe is Robert Kelley. Bob is a former nuclear weapons analyst at Los Alamos National Laboratory, a former director of the IAEA, also an associate research fellow at the Stockholm International Peace Research Institute.

JAY: So we’re going to do a quick take, your overall take of the agreement, go through a few of the very basic points. And then we’re doing a separate piece, which you’ll find just right next to this video, which will be a very detailed working-through [of] the fact sheet that was released by the P5+1.

KELLEY: It appears to me that the agreement–and I’ve had a chance to read through it and listen to the president–has been very well-crafted in the plutonium area. The reactor is going to be modified to make it much less of a plutonium producer. There won’t be any reprocessing when the fuel will be shipped out of the country. You can’t do any more than that. That’s really, really effective. That’s excellent.

JAY: Okay. The fact sheet also–and President Obama laid out it shuts down the path using enriched uranium centrifuges, which will be reduced by two-thirds, at least for the next ten years. How big a deal is that?

KELLEY: Well, it’s a big deal if you look at the details, because the details limit them to running a small number of very obsolete centrifuges, centrifuges with their design back in the 1960s–extremely poor quality, high failure rate. This is just a face-saving major for Iran, to allow them to say, we’re still enriching, you didn’t make us stop. But in fact it will have very little impact. And if they ship the material out of the country, as seems to be what Kerry was saying in his press conference (I haven’t seen it in detail), that would further close the loophole.

JAY: Okay. President Obama in the facts sheets say that Iran will now not be able to stockpile nuclear materials to build a weapon. The plan will make sure it’s a minimum of a year away from a bomb even if violations occur, with a 15-year limit on stockpiles. Important?

JAY: Okay. And in terms of inspections, it guards against covert building of a weapon. Inspectors will have unprecedented access to an entire supply chain. In fact, President Obama said Iran–these–inspection regime is the most vigorous, rigorous in history. No country’s ever been subject to such a level of inspection.

KELLEY: That’s almost true. Iraq was subject to quite a bit more difficult inspections, but they lost a war and they had to let us trample all over the country and go anywhere we wanted and do anything we wanted. This is not quite that good, but everything that Iran has declared and says they have is going to be subject to inspections on a very frequent basis, in many cases daily, although I’ll point out that most of this has already been in effect for the last 16 months, and Iran has cooperated very much in that area.

JAY: Okay. And, finally, there is a provision here for the IAEA to be satisfied that there’s no possible military dimensions to the nuclear program. You’ve said to me that’s a flag, a red flag.

KELLEY: Well, it’s a red flag because the IAEA has a history of dragging its feet and never being satisfied. They can always ask more questions. The director general said–just last November, I believe it was–that in some cases it would take more than ten years to satisfy him about the complete program of a country. Well, I don’t think Iran is going to be very happy if the sanctions are going to come off immediately with the caveat that IAEA has to be happy and agree and IAEA is actually planning to take ten years to do it or more. That’s a red flag in the agreement. It needs to be renegotiated before the June deadline.

JAY: Now, the sanctions are going to be phased in as Iran phases in its compliance with all these various agreements. And there’s room here to have quite a bit of argument about chicken and egg. Does Iran take irreversible actions, like, for example, destroying the core of one of their reactors, before significant sanctions are left out? So that’s another room, another space where there’s going to be continuous arguments, I would think.

KELLEY: Well, that’s a little beyond what you can get in one evening of looking at the agreement. As many of the reporters I’ve watched all day long said, the devil’s in the details, and those details will have to be worked out, which is the chicken and the eight. But I’m sure Iran is expecting, as I’ve said all along, they want some immediate relief in the sanctions ’cause their economy is going in the toilet.

JAY: Okay. The short of it is, is President Obama correct? If Iran lives up to all of this, which Iran says we have nothing to hide, so why wouldn’t we, assuming all this is implemented, does this solve the problem that Iran will not be able to make a nuclear weapon? I’ve got to keep saying there’s no evidence they want one, but at any rate–.

KELLEY: It’s pretty clear that this agreement was well drafted to make sure that the declared program, the program that Iran has admitted to, nuclear materials, nuclear power, will not be diverted. There’ll be so many people watching it, that’s very unlikely. And I’m surprised, pleasantly surprised, that some of those words about looking at the supply chain and getting into other areas will preclude them from having a clandestine program as well. You know, it doesn’t stop it, but it makes it much more likely to get caught. And if they had a clandestine program and one little bit of it leaks out under this, they’re dead. So I think it’s a good agreement.

JAY: Okay. Good. So we have done, as I said, another interview with Bob, which will be posted right next to this one, where we go through the agreement in a lot of detail.