Robert Kelley says that David Sanger in The New York Times claimed Iran had backed off a commitment to ship uranium out of the country, something that was later refuted by the U.S. State Department

Robert Kelley says that David Sanger in The New York Times claimed Iran had backed off a commitment to ship uranium out of the country, something that was later refuted by the U.S. State Department 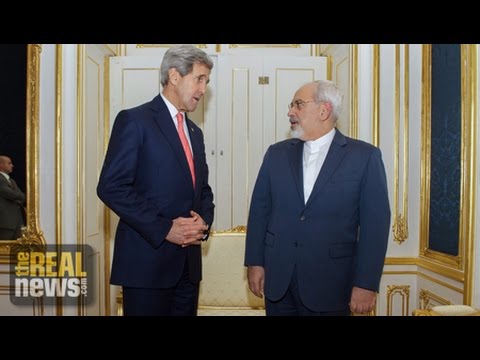 PAUL JAY, SENIOR EDITOR, TRNN: Welcome to the Real News Network. I’m Paul Jay. On Sunday the New York Times released a story essentially saying that Iran had rejected a key demand of the negotiations taking place between the P5+1 countries and Iran over their nuclear program. I must add, as I always do, there’s still no evidence that Iran wants to create a nuclear weapon. That’s something that doesn’t get said very often, these days.

This all began with the article by David Sanger in the New York Times: Iran Backs Away from Key Detail in Nuclear Deal.

On Monday morning, the New York Times published another article with an excerpt of an email from an anonymous State Department official, which said contrary to the report in the New York Times, the issue of how Iran’s stockpile would be disposed of had not yet been decided in the negotiating room, even tentatively. Then on MSNBC’s Morning Joe, the State Department’s deputy spokesperson said:

STATE DEPARTMENT DEPUTY SPOKESPERSON: Obviously stockpile and what happens to it, and how Iran gets rid of it is a key part of this possible agreement we’re trying to get to. But the notion that we had some agreement that in the last 24 hours Iran has backed away from just is factually inaccurate. There’s never been agreement on that. We’ve been talking with them about a couple different ways they could do it. And we’ll see if we can get to agreement in the next 24 hours or so.

JAY: Now joining us from Europe is Robert Kelley. Robert is a former nuclear weapons analyst at Los Alamos National Laboratory, and a former director at the IAEA. Thanks very much for joining us, Robert.

KELLEY: Well, wise people have been telling us all through March ever since the joint address to Congress that we shouldn’t jump to conclusions on things that haven’t been decided. And so all these leaks that are coming out, allegedly from the talks, are obviously preliminary. And so if there was a leak out there that says something that was never decided and never agreed to is no longer agreed to, I’d call that malicious.

JAY: Yeah, it seems designed to scuttle the talks.

KELLEY: Clearly it’s designed to scuttle the talks. But it’s not the first thing that we’ve seen in the [inaud.]

JAY: So if we get into the substance of the issue, which is what’s going to happen with the stockpiled uranium? What are reasonable options?

KELLEY: I think that the most reasonable option is one that Iran should seriously consider. They have a very small enrichment capability, and so from a commercial point of view, they’re providing commercial enrichment services, and they would send that material, then, to Russia to be enriched, made into ready-made fuel and sent back to them.

Because their capabilities are so small, they’re their only customer. They themselves are the only customer. This allows them to have an enrichment program for national pride, and yet make this material completely unacceptable for weapons. I think anybody would agree that this material’s turned into fuel and put into the power reactor [inaud.] it is forever, irrevocably not available for a weapons program. That’s the [inaud.] dilution.

JAY: Apparently the Iranian foreign minister has said that shipping their already-enriched stockpile to Russia is off the table, that’s not in their program. If that’s a correct quote, and now who knows what’s a legitimate quote at the moment, but if it is what do you make of that?

KELLEY: Well, kind of unfortunate. Again, we’re dealing with rumors and leaks. But this idea of shipping the material out of the country has been on the table for years, and it was proposed with Brazil and Turkey and with Russia, that they take the material out, turn it into another form, and then bring it back and burn it in the power reactor, which makes it absolutely unusable for weapons.

JAY: Now, one of the ideas that’s being floated this morning in all of this, apparently from Western officials, is that an alternative being discussed is diluting the enriched uranium. Is that a, from a scientific point of view, can that be done in a way that would achieve the same objective?

KELLEY: Well, and the term dilution of course is not defined here, so we don’t know what they’re talking about. But I … I think you have to admit that we mine uranium from the ground, we convert it to the form of gas and enrich it. And so if you dilute it back down, what’s to keep you from doing it again? So the dilution has to be some irreversible process, and that hasn’t been defined. So diluting it is, is very hard to speculate on when you don’t know what the plan is.

Furthermore, why would anybody enrich material to 3.5-5% and then dilute it back to where they started? It’s a total waste of time and money, so … it doesn’t make a lot of sense.

JAY: So so far, given that we don’t know the details of all this, the real story here is a leak which turns out to be not the case.

KELLEY: That’s what it would seem to be in this case. But let me add one thing, is when they enriched material to 20% a few years ago, and then agreed 16 months ago to dilute it back down to 5% or so, that was a very reasonable thing and it was a huge compromise on their part. So that made sense, that kind of dilution, bringing it back to power reactor levels. But I think we had all had kind of hoped that then the material would be shipped to Russia.

In fact, frankly, if I could tap on the shoulder of the Iranians, I would say this is a really good solution. It’ll prove to everybody that [inaud.]

JAY: I guess from their point of view, they’re, you know, their position is they don’t have a weapons program. And that is, as far as we know, still what the national intelligence agency’s estimate was, that they don’t have a weapons program. So in terms of their ability to have their own sovereign right to enrich uranium under their, you know, the non-proliferation treaty. If I understand it correctly they have such a right as long as they keep it at these levels, 4-5% levels. They’re saying why should they?

KELLEY: Their right is not based on what levels they bring it to, their right is based on the fact that they signed the treaty and complied to it. The important thing is that they give all this material to the IAEA, and allow the IAEA to verify, which is what IAEA is doing. So enriching the material, and then diluting it back down to say, natural, and letting IAEA verify that is a total waste of time and money.

Again, I think this is a matter of national pride. They’ve been backed into a corner, and they say we’re going to enrich. We’re not really sure why we’re enriching, but we’re going to have to. If they were to take the attitude that this was a commercial enrichment plant and they were getting fuel back from that plant, that would be great.

Let me add one other thing. I read some reports here the last year, I think they were true, that Iran gave up their space program. Because they thought it was too expensive and it didn’t make sense. I think they might be in the same position with the nuclear program. It’s just that they’ve been pushed into such a bad corner that their pride just won’t let them give it up.

JAY: Now, one of the things that we keep hearing from the critics of this deal is that Iran, essentially, is not living up to the demands of the IAEA when it comes to inspections. There’s been a couple of articles recently, one in the Washington Post, and John Bolton had one recently in the New York Times, essentially saying Iran can’t be trusted, and actually calling for bombing Iran, which it seems to me is actually calling for what is a war of aggression, which is illegal. But the New York Times seems not to have a problem publishing that. But what is, how is Iran doing, in terms of living up to the demands of the IAEA?

KELLEY: First I find it stunning that a former UN Ambassador who is mentioned as a possible future Secretary of State in a Republican administration would talk about bombing another country to stop them from building bombs. That’s absolutely astounding.

But with respect to whether or not Iran has complied with the IAEA, at least with all these nuclear deterrence issues, especially for the last 16 months, they’re in total compliance. So these stories are garbage. Just pure, unadulterated garbage that the IAEA’s not allowing inspections. They’re allowing inspections at the enrichment plants that would normally be done monthly. They’d agreed to do them every two weeks, and now they’re doing them daily. For crying out loud, what are they supposed to do, just have the inspectors live there and do the inspections continuously? They’re complying in all of their nuclear materials facilities 100%.

There’s this argument about whether they can go to military bases, in universities and high explosive plants and things like that, which are completely outside the NPT. And if you want to mix that in, then you could start to … start to have some arguments. But actually, the IAEA doesn’t have the right to go to those places. So they’re going everywhere they’re supposed to and doing what they’re supposed to. And frankly, IAEA’s doing a very good job in the materials area. They’re not doing a good job in the weapons area, but that’s another issue.

JAY: All right, thanks very much for joining us, Robert.

KELLEY: Good talking to you.