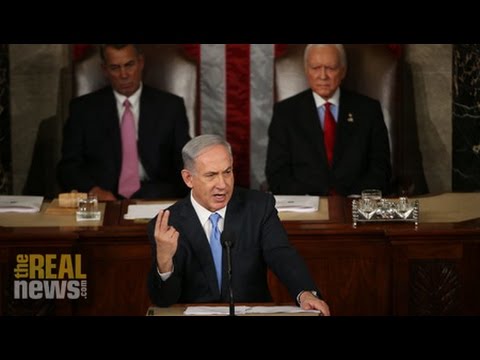 BENJAMIN NETANYAHU, PRIME MINISTER OF ISRAEL: If the deal now being negotiated is accepted by Iran, that deal will not prevent Iran from developing nuclear weapons: it would all but guarantee that Iran gets those weapons–lots of them.

JAY: He went on to make argument why he thinks that’s true.

NETANYAHU: Absent a dramatic change, we know for sure that any deal with Iran will include two major concessions to Iran. The first major concession would leave Iran with a vast nuclear infrastructure, providing it with a short breakout time to the bomb. Breakout time is the time it takes to amass enough weapons-grade uranium or plutonium for a nuclear bomb.

According to the deal, not a single nuclear facility would be demolished. Thousands of centrifuges used to enrich uranium would be left spinning. Thousands more would be temporarily disconnected but not destroyed. Because Iran’s nuclear program would be left largely intact, Iran’s breakout time would be very short–about a year by U.S. assessment, even shorter by Israel’s. And if Iran’s work on advanced centrifuges, faster and faster centrifuges, is not stopped, that breakout time could [snip] a lot shorter.

JAY: Now joining us to parse through Netanyahu’s speech, especially on issues of science, is Bob Kelley. Robert Kelly joins us from Europe. He’s a former nuclear weapons analyst at Los Alamos national laboratory and a former director of analysis at the IAEA.

JAY: So, what do you make of the quote that we just played, that there won’t be any destruction of facilities, and the centrifuges are going to be there, and they will have a breakout time, so, according to him, this guarantees that Iran will have a nuclear bomb? I guess he means at the end of that ten-year period.

KELLEY: Well, there’s a lot of astounding nonsense there. It’s hard to work through all of those things.

First thing is breakout time is a complete misnomer. It’s so uninformed and so ill educated. Breakout time would be if Iran did something that surprised us and went in a direction we didn’t see, like somebody pulled a rabbit out of a hat. That’s breakout time.

What he is trying to talk about is Iran reaching a threshold and their reaching it in a slow methodical way, monitored by IAEA observers and the rest of the world. So the idea that they’re going to break out is absolutely peculiar. He doesn’t understand arms control, unfortunately.

The idea that Iran would destroy any or all of their nuclear facilities is also bizarre. It’s never been on the table before. If Israel wants to step up and say they’re going to destroy [incompr.] and destroy [incompr.] when maybe we’d see a little bit of parity here [incompr.] destroy some facilities too. I don’t think Iran ever agreed to destroy facilities. There are a lot of facilities in Iran that are nuclear that have nothing to do in any way with a weapons program [inaud.] coming from.

But here’s a problem. You see, inspectors document violations. They don’t stop them. Inspectors knew when North Korea broke to the bomb, but that didn’t stop anything. North Korea turned off the cameras, kicked out the inspectors. Within a few years, it got the bomb.

JAY: So he’s saying that the inspectors won’t be able to stop the breakout.

KELLEY: Well, he’s making a great campaign speech, but I can’t vote for him, and probably most of the people in the room can’t, either. What he’s talking about, again, is nonsense. Inspectors in North Korea were doing a great job, and then North Korea threw them out. What was the message from that? The message was the inspectors are gone, you’d better do something about it.

Right now you’ve got lots of inspectors crawling all over Iran. Just in round numbers, they’re performing 1,000 man days inspections per year. That’s a lot. And so people know exactly what’s going on the country. The International Atomic Energy Agency is the eyes and ears of the world, and they’re doing a difficult job and doing it well. If he screws this thing up and he forces the status quo to be destroyed, which is what it seems like he’s doing, and then use those inspectors, then there will be a war. Right now the inspectors are preventing it.

This garbage about, well, in ten years they’ll suddenly be free to do what they want, they’re under IAEA inspections for the next ten years and for the ten years after that. So it’s not as if this deal runs for ten years and then everybody goes home and nobody knows what’s going on. These were bizarre claims.

JAY: I mean, he’s actually quite contradictory, North Korea example, because he essentially is saying the inspections were working, and in order to break out, they had to throw the inspectors out. Well, that would be a rather obvious flag that everyone would know they’re now breaking out. So he really actually contradicts himself there.

KELLEY: You’re exactly right. The inspectors are there to ensure that people understand what’s going on in the declared programs. If there is a secret program in the country–we’ve said this before–if there’s a secret program, the inspectors are not there to find it, they won’t discover it, and we’re not responsible for. They are there to make sure that these facilities that have Netanyahu upset are operated in a safe and sane way. That’s what they’re doing.

JAY: Yeah. I mean, it was a bit of a self-fulfilling prophecy towards war, because if he wants to make the argument there’s a secret program going on, of which there’s no evidence, then there’s no point inspecting and there’s no point having a deal. But then what are you going to bomb anyway? It really doesn’t make a heck of a lot of sense. But let me ask you. I mean, how realistic is it that there is a secret program that the inspectors would have no idea about?

KELLEY: Well, the second part of your question is the inspectors would have no idea of a secret program. They’re not supposed to. They’re not paid to. They don’t have the tools to. They don’t have the experience to find it. That is not what they do. They’re like bank auditors who go to banks and make sure the banks are run honestly. They don’t look for counterfeiters somewhere else. So a secret program is not within the purview of the IAEA.

But the IAEA will be auditing what is known to go on and make sure that it stays within bounds. If there any changes in what Iran is doing, changing the number centrifuges, the speed at which they run, the quality in which [incompr.] IAEA [incompr.]

So I think the IAEA is our best hope here. And by trying to destroy the IAEA and their ability to monitor the country, he’s almost guaranteeing a war.

JAY: Now, he refers to the IAEA as, recently, in a report, saying that Iran has not been as forthcoming as they should be. Here’s what he said.

JAY: Is that true?

KELLEY: I doubt very, very much if IAEA said yesterday Iran is not coming clear–coming clean on their weapons program. But IAEA has said in other cases (and I didn’t hear it yesterday) was that Iran has not provided information to the IAEA that the IAEA can understand about the questions they’re asking.

Regarding Qom and Fordow, neither one of those facilities were being operated at the time that they were disclosed to the IAEA. So the statement is not true.

JAY: To go back to this issue of a secret program–’cause he goes back to it in the speech–here’s what he says.

NETANYAHU: Right now Iran could be hiding nuclear facilities that we don’t know about, the U.S. and Israel. As the former head of inspections for the IAEA said in 2013, he said, if there’s no undeclared installation today in Iran, it’ll be the first time in 20 years that it doesn’t have one.

JAY: So is this true? Iran has a history of secret sites, and that we’re likely to think that there should be, there are secret sites?

KELLEY: I would be worried that Iran might be hiding something. But you can say that in any country in the world, where again, this process, this JPOA process and IAEA inspections are not designed to find that. That’s the job of the CIA and the intelligence agencies. IAEA is not an intelligence agency. And to ask them to be finding secret facilities in Iran is completely outside [incompr.] interest.

KELLEY: Well, I don’t think I can answer that. That’s something that if there’s a change in Washington intelligence they’re going to keep to themselves until it’s politically useful to release it. But the last we heard is the intelligence community doesn’t believe there is a secret program. If there is a secret program, it would be very large, it would have to go everything from uranium mining to conversion to chemistry, to producing UF6, to making centrifuges and running them. And all you’ve got to do is have one person who leaks that information who is a spy or an insider, and poof, this whole big secret program would be revealed.

So yeah. Is there a secret program? Yeah, could be. They could have a secret program to put a man on the moon. But it’s really stretching to say that, because you can say that about any country anywhere.

JAY: So just to go back finally to a point we made an interview we did recently–and I’ll ask you the same question–is there any evidence that they actually intend to build a bomb? All of this speech and most of the rhetoric we hear, not just for Netanyahu but from others, all presupposes that intent.

KELLEY: Well, evidence to build a bomb is something that would be held in close political circles, and I don’t think that we would see it sitting here on the outside. If you don’t build the facilities and you won’t put the people on program and you won’t spend the money to do it, then you probably don’t have intent. But it may be that down the line, that you have acquired knowledge and acquired capabilities that will enable you to do it someday. There are many other countries in the world, of course, that have done this, including European countries, that then didn’t go forward to a bomb.

There are many positive outcomes [inaud.] I’ve mentioned today. I didn’t hear positive outcomes about them reducing their stockpiles of uranium, blending the 20 percent materials down. It was very selective [incompr.] were picking out things that sounded bad, but no compliments given to the teams that have done a really good job of reducing the threat.

JAY: Thanks very much for joining us, Bob.