Has Capitalism Lost the Ability to Reform Itself? – Robert Johnson on Reality Asserts Itself (7/8)

Capitalism is not rebalancing; the yearnings and desires of large portions of society are not being responded to

Capitalism is not rebalancing; the yearnings and desires of large portions of society are not being responded to 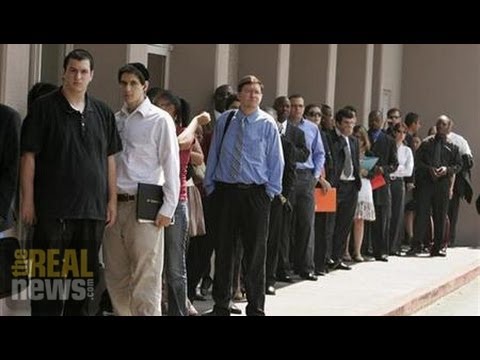 PAUL JAY, SENIOR EDITOR, TRNN: Welcome back to The Real News Network. I’m Paul Jay in Baltimore. And welcome back to Reality Asserts Itself with Rob Johnson, who joins us again in the studio.

JAY: One more time, Rob is president of the Institute for New Economic Thinking and a senior fellow and director of the Global Finance Project for the Franklin and Eleanor Roosevelt Institute in New York. He was managing director at Soros Fund Management, where he managed a global currency, bond, and equity portfolio.

When INET was created, I saw an interview with Mr. Soros, who says we’re going to question all the fundamentals. But are you questioning all the fundamentals? And what I’m getting at is this: do you not start from the point that private ownership of the commanding heights of the economy is okay, that private ownership of the banking system is okay? Do you question that?

JOHNSON: Yeah. But what I would say is at the level that George is talking about, fundamentals, we’re talking about what’s the nature of information that any person in any institution has. Can a central bank really control what’s going on when they give very authoritative speeches? Could the commanding heights be organized, how you say, efficiently or for the well-being of society, given how little people actually know when they drive out into the fog of the future? Are financial firms that have all kinds of skewed incentives with management, stock options and buybacks and so forth, spending enough on long-term R&D and training workers and so on? We question all of these things. But the question of what kind of information does any given actor have, what kind of production, and for whom, how they can influence the political process, whether there’s inherent stability or instability in the system–.

You know, economics is founded on a rather cheerful note that everything reaches equilibrium. It’s not clear that that’s truth. That’s an assumption. That’s an assertion.

JAY: Well, it seems pretty clear that’s not true. I mean, you’re–Soros and you and INET, your critique has been against that kind of market fundamentalism, that the market clearly isn’t reaching equilibrium.

JOHNSON: Well, my sense is there are times when it approximates something like that, and there are times like in the United States now where we’ve had a prolonged slump from 2008 to the present where it doesn’t even begin to approach re-equilibration around full employment.

JAY: And whatever sense of equilibrium there is now, how much is that the function of the Fed and sort of the quantitative easing or ability to keep putting tons of zero-interest money, essentially, into the big banks to make them appear stable? Is that really covering up the fundamental underlying flaw, paralysis of the economy, really?

JOHNSON: Yeah, but I don’t think the paralysis emanates from the Fed.

JAY: [crosstalk] covering it up.

JOHNSON: I think the Fed is the second mover in a dysfunctional system, doing the best they can. And it may have some very adverse side effects that we’ll experience in the future. What we really needed in the United States was a very, very profound rebuild of our education system and our infrastructure. And there was no better time to do it than when we had all this slack labor, particularly from the construction industry after the housing bubble collapsed in 2008. I think we have tremendous policy failures in the United States at this juncture.

JAY: And wages are stagnant.

JOHNSON: Right. And real wages are stagnant–going down for very large portions of the population. So the question is: is this a coherent international system as it’s currently constructed? I think the answer is pretty clearly no. I think the balance of payments system which emphasizes adjustment by debtor and deficit countries, not by creditor countries, is also sputtering.

JAY: But if the global economic system and the American economic system, if the answer is no, it’s really essentially dysfunctional. On the other hand, it’s extremely profitable if you’re in that top tier, and not just the finance sector–there are some others sectors that are doing very well too, but particularly finance. For them, this isn’t dysfunctional. This couldn’t be any better.

JOHNSON: Yeah, if you can produce things in Pakistan or low-wage economies, portions of China, and sell them in the developed world and use financial engineering to conduct stock buybacks for the top executives, there are a handful of people making a lot of money.

JAY: And this kind of great gap, both in terms of wealth and in terms of power, if you go back to the 1930s, there seems to have been two potential responses in crisis. And I’m assuming you agree with this. This thing that happened in 2008, the crisis, it will happen again. We don’t know–you know, sooner or later. Nothing’s really been fixed. If we go back into this deep crisis, if you look back at the ’30s, there were two strategies to save capitalism. One was the New Deal and the other was fascism. But you don’t see the forces that would create a New Deal.

JOHNSON: Well, Karl Polanyi wrote the book The Great Transformation about the move from free-market fundamentalism to a Roosevelt-like New Deal, and at some level Mark Blyth, I think, wrote another book about the undoing of the great transformation. Mark’s a scholar at Brown.

I thought that the response of the right to 2008 was they said, we’re not going to let ourselves have another New Deal, and they fanned the flames of the public in hostility towards government action, particularly focusing on the bailouts and the bankruptcy of the auto companies and the restructuring. So the people did not say, we need larger government; they said, there might be something government should do, but this government’s corrupt and it won’t do it; we don’t trust them. As a result, you might say that the people who do not want a larger presence of government learned from how the New Deal played out how to play a more aggressive role here and inhibit that from happening. But that doesn’t necessarily mean they solved our problems.

JAY: And so how dangerous a moment are we in?

JOHNSON: I would say the moment right now is one of accumulating environmental dangers. I don’t see us making real constructive [energy?] there. I think the inequality and the support and bailouts of the financial sector have reduced the legitimacy of society in the sense of coherence. And everyone’s afraid. When you see a man like Thomas Perkins or Ken Langone talking about the people are acting like Nazis, first of all, I think it’s a horrible analogy to draw, but that reflects fear at their level that the system isn’t coherent. They would like at this point in their life to have both themselves and others believe that they had used their talents and they’d made a lot of money and that that was a good thing, and they created a company, like Home Depot, that did a lot better for a lot of people. They are being accused of being criminal, and they are aware that this hostility or the hostility towards the too-big-to-fail banks is not going away.

JAY: So has capitalism lost the ability to reform itself?

JOHNSON: That’s an open question. But I think right now capitalism is not rebalancing. It’s like an engineering system. They design it to have feedback. You know, when something’s off course, like the space capsule, the feedback comes in and you correct your course. It feels like the yearnings and the desires of large portions of society are not being responded to. The education system is deteriorating. People like Diane Ravitch are talking very, very eloquently about how private equity and hedge fund managers are all teaming together to try and make a profit from the education system, not to educate our population. Health care is considered to be what you might call the codification of pharmaceutical, hospitalization, and insurance monopolies, not something that’s taking care of people. The kind of surcharges people pay in finance when you’re getting no interest on your deposit account don’t inspire you to think that somebody’s trying to provide a valuable service to you.

So I think there’s questions all across the spectrum at this point, and I think, as you said, whether capitalism can address these questions, perhaps the most profound being climate-related issues, is an open question. I think as the tension, as the urgency gets higher–you cited fascism as a response–information surveillance, greater [use of ordinance?] are dangers that, how you say, may be one path that people would choose. I hope we go in a different direction.

JAY: Okay. One more segment. We’re going to talk about what the future might look like if there isn’t a major course correction, and what some possible solutions might look like. Please join us on Reality Asserts Itself on The Real News Network.