Martin Collier: We are what we measure and GDP does not measure what we value

Martin Collier: We are what we measure and GDP does not measure what we value 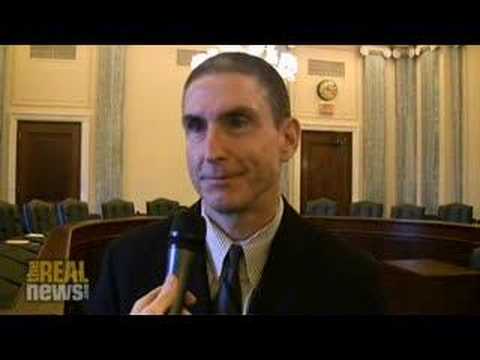 ZAA NKWETA, PRESENTER: Forty years ago, Senator Robert Kennedy gave a speech in which he questioned using the GNP as an indicator of economic prosperity in America.

ROBERT KENNEDY: Our gross domestic product now is over $800 billion a year. But that gross national product, if we judge the United States of America by that, counts air pollution and cigarette advertising and ambulances to clear our highways of carnage.

BYRON DORGAN, US SENATOR (D-ND): It’s clear from the current economic circumstances in our country that we’ve not been accurately reflecting either the wealth or the stability of our economy. People work longer hours and have less time, and that would all be viewed in most cases as a positive in our GDP numbers. What can we do to better measure progress in our country?

After the hearing, Real News reporter Matthew Palevsky interviewed Martin Collier, director of the Glaser Foundation, a Seattle think tank interested in the reevaluation of the use of gross domestic product as a useful indicator of economic progress.

MATTHEW PALEVSKY, JOURNALIST: What are we missing when we look at GDP as an indicator of growth and economic success?

MARTIN COLLIER, DIRECTOR, GLASER FOUNDATION: GDP measures money changing hands. So when money doesn’t change hands, it’s missed. It counts negatives as positives. And it also leaves out a wide range of things that are very, very valuable to us. If there’s an oil spill on Puget Sound, where I live in Seattle, GDP goes up, because [inaudible] are higher, there’s cleanup crews, all sorts of things. If someone gets cancer, GDP goes up. We can measure the depletion of our natural resources. We don’t do that. We could measure the impacts of pollution on health and property damage. And that’s just two examples. What I would propose is that at least as often as GDP we present other statistics. What are real wages doing for ordinary people, for instance? What’s the national debt look like? It’s now up to $9 trillion. We’ve got 47 million people in this country without health insurance. We’ve got over 37 million people in poverty. Those things should be reported along with increases in GDP to give us a more complete picture. The most simple way to put it is you are what you measure, you get what you measure, and you fix what you measure. It’s time to measure what matters most, it’s time to measure what we value most, instead of simply valuing what we measure.

Martin Collier is founding Executive Director and a Managing Board Member of the Glaser Progress Foundation, created by Rob Glaser, CEO and Chairman of RealNetworks. At the Foundation, Collier oversees initiatives to: create new and better measures of national progress; support independent and progressive media; and strengthen the Global Fund to Fight AIDS, Tuberculosis and…