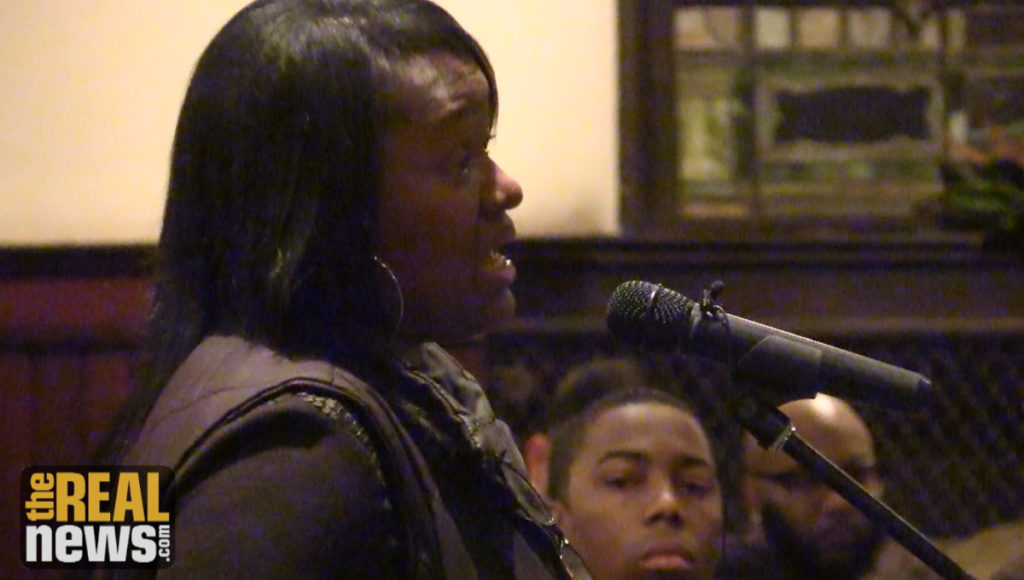 Stephen Janis: Well, the first thing is people should know the Civilian Review Board is the only sort of civilian oversight body that the city has. So they came into the community because there were a lot of complaints about the investigation. When Detective Suiter, if people don’t know, a Baltimore City homicide detective, was killed, or died in this neighborhood, they pretty much locked down the entire neighborhood. You had Jill Carter from the Civilian Review Board and the entire board here to hear concerns of the community, along with the Maryland ACLU. What we heard was, from a lot of different people tremendous anger that number one, that the community was kind of on lockdown, that people were being frisked. Jill Carter said, “Actually, they’re investigating complaints of people being falsely imprisoned.” Obviously, this community was turned upside down during this investigation.

Taya Graham: That’s a very serious complaint to say that you were falsely imprisoned. If the Civilian Review Board is looking into that, couldn’t that mean there’s some disciplinary action for the police officers involved?

Stephen Janis: Yeah, well certainly there are certain rules that the ACLU outlined about when you can be stopped under what circumstances. What they were using was the stop and frisk law that says an officer has to have reasonable articulable suspicion, but nevertheless the ACLU was there to counsel people. Yes, it is a very serious charge. I think the other thing the community was angered about that we saw was the disparity between the length that the city goes to investigate the murder of one of their own, versus people in the community. That really came through tonight, that the general frustration that police just don’t care about us, which was evidenced by this investigation and about the way they have approached Sean Suiter. Of course, I think looming over the whole thing was the monitors were there from the federal monitors.

Taya Graham: Yes, the independent monitors were there, yes.

Stephen Janis: Yeah, which is really interesting because I asked them, “Will they talk to us?” I asked them if they were going to make a comment. I asked them if they were going to do any action and they looked at me like I was someone out of outer space. Now, this is the people who are supposed to be being paid by the city taxpayers to monitor the police department. It is not supposed to be a secretive process, but I can tell you that they acted like they had no reason to talk to us as a media, which I think is absolutely ridiculous. Sorry, I’m a little-

Taya Graham: Right. Aren’t they supposed to share the information-

Taya Graham: That they gather?

Taya Graham: They were supposed to be chosen by the community as well.

Stephen Janis: Yeah, and I said, “Can we do a quick interview?” They looked at me like, “What are you talking about? I’m not supposed to talk to the media.” Well, I think that is ridiculous. Given the allegations, this is a perfect situation. I think it’ll be a real test of the monitors to see what they do. Why don’t we go to some video we have so people can just see the complaints, a lot of passion and anger tonight with the civilian reward in the neighborhood where Detective Suiter was murdered.

Jill Carter: There could be possibly, and this is speculation at this point, because we haven’t investigated anything, but a few complaints that would indicate possible harassment and possible false imprisonment. I think overall, there’s a policy issue about whether or not this was constitutional behavior and then whether or not even if it was legally constitutional, was it in the best interest of the community at this time that we have DOJ oversight. Well, I mean, the consent decree.

Not just bad, just completely kind of dismissive of why we’re even here understand a consent decree. We’re here because of the question of constitutional policing and then we do this extremely radical act of cordoning off a community, which is questionably unconstitutional. Well, and I think too, the idea of making people understand that we understand that we’re valuable, I think that the message of what they did because of the Detective’s homicide, or potential homicide, versus the lack of that kind of action with the other 60 or so people that were killed in West Baltimore this year.

Speaker 4: The second day when this was locked down, they should … This board should’ve went to the media and said, “You’re in violation, section number 2652”–I just made that up. But whatever the violation quotation is, they need to be stopped. When I see a murder, or I see a rape, I’m going to call that in and I expect the police to come and take care of that. With the monitors that we have and with the Civil Board, are they going to really engage in making sure that the violations don’t continue? If the commissioner’s responsible, that he’s making the final call, then maybe the laws will be changed later, that somehow we would have to go over his head, because he’s defending the criminal violations.

Speaker 5: The issue that we do not wish to deal with in the city is an uncomfortable issue. That is the issue of race. Everything in this city is related to race. In the disparities that exist, not just with the police department, I don’t care if it’s housing, development, resources, funds, across the board it is clear it’s all based on race. If this incident would’ve happened in Roland Park, that neighborhood would not have been corridor-ed off six or seven blocks. We saw the disparity when the white woman was killed in Roland Park. Damn near the whole police department came out and searched, but when Pookie got killed in the neighborhood, they put a detective on it and said, “We’re going to check it out.” The thing is with this body, it has bodies like this has been developed and put together throughout the country, they have been ineffective, because they have no subpoena power. They even do not have the power to be able to take these officers before the grand jury here in Baltimore City and the people here in this city should have access to the grand jury. The police cannot police the police. What we’re dealing with in Baltimore City is a criminal organization.

Speaker 6: To directly deal with the issue regarding the community being locked down. Briefly, I was in Belize. My 20 year old son was here. I was not able to enjoy my vacation because all I could think about was what would happen if the police engage my son inappropriately. From that, I want to just express three things that I think the review board should definitely take a look at that don’t just have to do with this particular incident. Whenever there was a shooting that was mentioned back in August of a young man named Jeffrey, the police put these lights up and I understand that the lights are supposed to help deter crime. I’m going to tell you, as someone who lives in the neighborhood, it makes me feel like I’m under a microscope all the time. I don’t know whether these lights are constitutional, but maybe this is something that you all should be looking into as well. The lights are …

Speaker 7: We got to go after the people who gave the orders, because the police officers on the front line just don’t decide to cordon off a city and be assigned to one area. They don’t make those decisions. This came from the police commissioner and that’s where we have to start it.

Speaker 8: I was walking down the street with a friend of mine and the police was locking up another guy, but he was a heavy guy. The other guy said that was with me was, “He’s too big. You got to put him in another car.” Once he said that, the officer beat him so severely. Some more polices from western district came down and when they came down — I guess it was the captain, whoever wear the white shirt and a hat — he joined in and beat this boy. There had to have been about nine of them, beat this boy so bad they knocked him out and he kind of … When they picked him up he kind of woke up a little bit and they knocked him back out. Me and a few other guys from the neighborhood got together and we went down to the citizen review board that was downtown across from the courthouse. We filed a complaint. We went to court. When we went to court, I think it was the guy from the FO police department. I think his name was Fry at the time, something like that. They came in and said, “The officers didn’t show up,” and we have not heard nothing since. That guy is damaged. As we speak today, that young man is damaged. It seems kind of awkward when y’all mentioned something about the police being involved. Right now, the police is a little bit different now and their mindset is … I’m quoting, “We only care about kids.” That means if your brother, your father, your uncle, sister, whatever, or whatever neighborhood, they’re not worried about that. When you become a police, you’re supposed to protect everybody.

Taya Graham: This is Taya Graham and Stephen Janis reporting for The Real News Network in Baltimore City, Maryland.

November 4, 2019
Sign Up for Our Newsletter
Help Us Make Real News!