Republican Estate Tax Repeal: An Effort to Avoid Ever Being Taxed

While Sen. Bernie Sanders proposes an important increase in the estate tax, Republicans are gearing for its complete repeal. Morris Pearl of the group Patriotic Millionaires, talks about how the Republicans' plan would help the rich from ever being taxed

While Sen. Bernie Sanders proposes an important increase in the estate tax, Republicans are gearing for its complete repeal. Morris Pearl of the group Patriotic Millionaires, talks about how the Republicans' plan would help the rich from ever being taxed 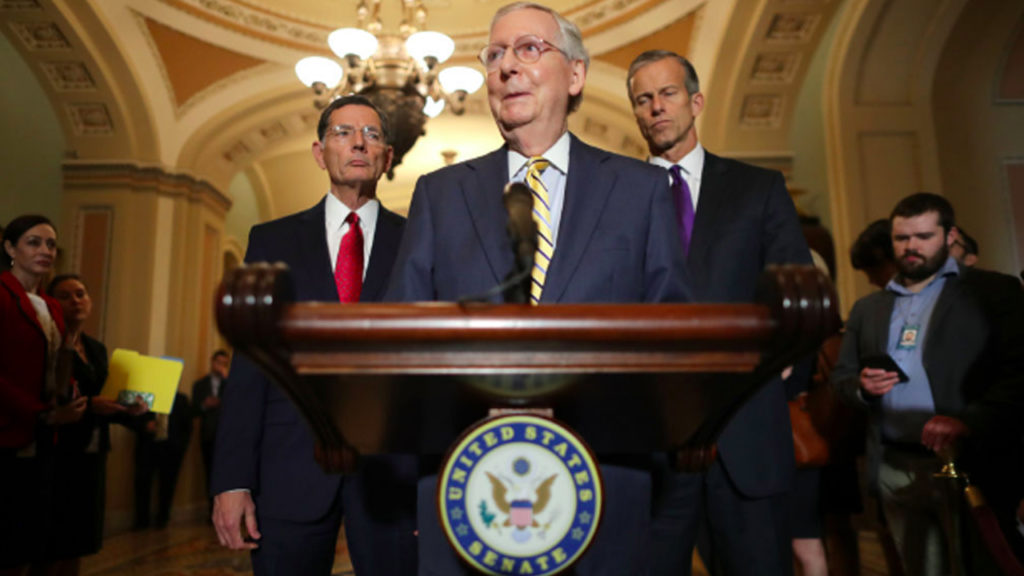 Senator Bernie Sanders introduced a new tax bill to the Senate on Thursday, which is called the For The 99.8 Percent Act. The idea is to increase the estate tax, which taxes wealth when it is inherited from one generation to the next. Sanders’ proposal is called the 99.8 Percent Act to highlight that it would affect only the wealthiest 0.2 percent living in the U.S.

Currently the estate tax only kicks in for wealth inherited in excess of $11.2 million dollars. Until 2017 the threshold was $5.4 million, but Trump’s tax reform of 2017 more than doubled the amount that could be inherited tax-free. In contrast, Sanders’ proposal would kick in at $3.5 million dollars. Sanders’ argument for raising the state tax is that wealth inequality has been growing dramatically in the past 30 years. For example, the top 1 percent in the U.S. doubled its net worth, from 25 percent of all wealth to 50 percent, between 1985 and 2015. Meanwhile, the wealth of the bottom 95 percent dropped from just over 50 percent to just under 40 percent during the same period.

Earlier in the week, however, Republican senators introduced a very different bill to completely repeal the estate tax. Senator John Thune from South Dakota justified the repeal of the state tax by saying “oftentimes family-owned farms and ranches bear the brunt of this tax, which threatens families’ agricultural legacies and makes it difficult and costly to pass these businesses down to future generations.”

Joining me now to discuss the debate about the estate tax is Morris Pearl. He’s the chair of the group Patriotic Millionaires. Before that Morris was a managing director at BlackRock, the world’s largest investment firm. Thanks for joining us today, Morris.

MORRIS PEARL: Great to be on your show, Greg.

GREG WILPERT: So let’s start with the Republican proposal to completely repeal the estate tax. As I mentioned, Senator Thune argues that the estate state tax negatively affects the ability of families to pass their family farms from one generation to the next. What’s your response to this argument, and to the idea of repealing the estate tax more generally?

MORRIS PEARL: Look, the current estate tax only applies to estates over $11.2 million dollars for a person, or $22 million for a family. I’d like to meet the family farmer in South Dakota who has a $22 million farm and can’t afford to pay 40 percent of only the value above $22 million. Those heirs who inherit that, there’s no reason why they have to inherit things totally tax-free while everyone else who makes money has to pay income tax on that money. The people, the children and grandchildren of the rich, just feel they should never pay any taxes at all.

GREG WILPERT: So another common argument that Republicans make against the estate tax is that it taxes wealth twice: Once when it is earned and then again when it is inherited, or upon death, which is why they like to call it the death tax. What is your response to this argument, that it is a form of double taxation and that this is a problem?

MORRIS PEARL: Well, it’s simply not true. The thing is, these people, when they inherit this land, this farm, this business, whatever it is, they’ve never paid taxes on earning it. If someone like Sam Walton starts a business from nothing, and then it’s worth $100 billion when he dies and his children inherit it, he’s never paid taxes on that huge increase in wealth. Sure, he paid tax on his salary all those years. But he never paid a penny on all the unrealized capital gains as his company increased in value from nothing to tens and hundreds of billions of dollars. Then when his children inherit it they never pay tax either, because they only pay income tax on the increase in value after he dies. They want to make it so zero tax is ever paid on this huge family dynasty wealth that accumulates in our country. It’s not double taxation. They want to go from single taxation has zero taxation for the billionaires.

GREG WILPERT: Now, Senator Bernie Sanders, as I mentioned, introduced this bill on Thursday to increase the estate tax. And when he did, he said the following.

BERNIE SANDERS: The legislation I am proposing would not raise taxes by a penny on 99.8 percent of the American population. But if you are in the top two tenths of 1 percent of the population, that population that inherits over $3.5 million, your taxes will, in fact, be going up, and they should be going up.

GREG WILPERT: Now, his proposal is actually a progressive proposal that starts at $3.5 million, and I believe it starts with 40 percent tax and goes all the way up to over a billion. And it is taxed progressively. What do you think of that proposal?

MORRIS PEARL: Look, the American economy was built in the 1950s and ’60s when we had taxes being paid at 70 and higher percent of people’s wealth when they inherited it. We were doing great back then. We had money, and they used that money to build things like interstate highway systems, and go to the moon, and do all of the things that made America great. Now they claim that we don’t have enough money to pay for things, and it’s because taxes have been lowered so much. There’s no reason why families who have the good fortune to build businesses and things worth billions of dollars need to have their children and grandchildren inherit such wealth that they never have to work and never pay taxes. So yes, I’m a supporter of Senator Sanders’ proposal.

GREG WILPERT: Now, predictably, of course, I guess after Sanders presented his proposals, Fox Business News lambasted it. Here are some examples of what they had to say.

SPEAKER: It ruins any incentive to try to get ahead. Forget about companies like Amazon and Microsoft, guys like Gates and Bezos and Elon Musk. What’s the incentive to create and accumulate vast wealth if you can’t give it away to your kids and your family and your estate?

SPEAKER: Fortunately, the narrative from the left is that the world is unfair, that the United States is unfair. I wish they would spend a little more time talking about how to create wealth, make more people move into that 1 percent, then only figure out how to bring down that 1 percent.

GREG WILPERT: So it’s kind of funny, actually, in some ways, I guess. But what’s your response to these types of arguments, which they’re making on the right all the time?

MORRIS PEARL: Never been seen. He should say never been seen since the 1970s. Why don’t we ask Bill Gates what he actually thinks, and what incentivized him to build Microsoft the giant it is? And was it–was it so his children could become billionaires? No. He’s already planned to give away his vast fortune after he dies. So why don’t you ask the actual billionaires? They did not decide, oh, I’m only willing to build Amazon or Microsoft if my children can be, you know, have tens of billions. Only a few billion for my children? I’d rather stay home and stay in bed all day. That’s the most ridiculous argument I’ve ever heard in my entire life.

GREG WILPERT: Another thing that didn’t come up in this particular clip, but that they also sometimes say, is that it would act as a brake on global growth, on economic growth, or that getting–the common argument usually is the less the taxes are, the more economic growth we will have. What do you think of that argument?

GREG WILPERT: Now, finally, an argument that doesn’t so much argue against the estate tax, but against its feasibility, perhaps, is that the country’s ultra rich will try to circumvent the estate tax by keeping their assets abroad, out of the reach of the U.S. government and in tax havens. In other words, what is also needed is some kind of a global agreement that would provide complete transparency about offshore banking systems. What do you think of this kind of argument, that in order to–for it to really work you need more transparency in the global banking system?

GREG WILPERT: OK. Well, we’re going to have to leave it there, unfortunately, but I’m sure we’ll come back to it once these proposals, these competing proposals, come up again in the Senate and in Congress. I was speaking to Morris Pearl, chair of Patriotic Millionaires. Thanks again, Morris, for having joined us today.

MORRIS PEARL: Yeah, great to be on your show.

Morris Pearl currently serves as Chairman of the Patriotic Millionaires. Previously, he was at BlackRock, Inc., where his work included the Maiden Lane transactions and assessing the government’s potential losses from bank bailouts in the United States and in Europe.