Over 200 demonstrators were injured in last week's demonstrations against the incumbent president, whose reelection lacks legitimacy according to the opposition and international observers. The opposition is now gearing up for a national strike in the lead-up to the inauguration, explains Heather Gies, reporting from Honduras

Over 200 demonstrators were injured in last week's demonstrations against the incumbent president, whose reelection lacks legitimacy according to the opposition and international observers. The opposition is now gearing up for a national strike in the lead-up to the inauguration, explains Heather Gies, reporting from Honduras 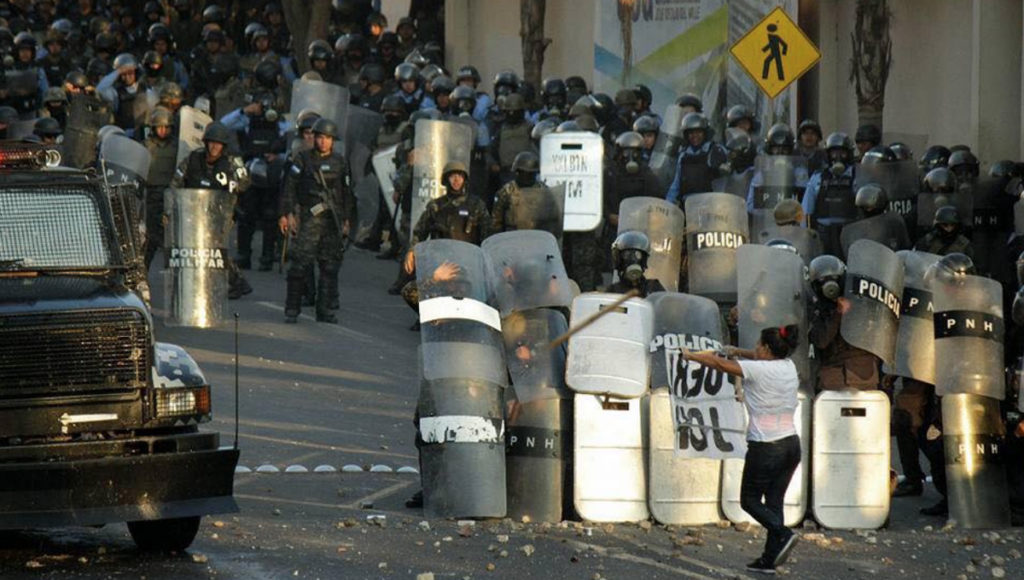 GREG WILPERT: Welcome to The Real News Network. I’m Gregory Wilpert coming to you from Quito, Ecuador. Last Friday, over 200 people were injured in clashes with the police when thousands took to the streets in the Honduran capital of Tegucigalpa. The protest was against last November’s presidential election, which the opposition says was fraudulent. So far, the ongoing protests in Honduras have claimed the lives of as many as 37 demonstrators.

The opposition is now calling for a general strike between January 20 and 27th, and meanwhile, the officially declare winner of the presidential election, incumbent conservative President, Juan Orlando Hernández, is calling for the opposition to enter into a dialogue with his government.

Joining me to discuss the latest from Honduras is Heather Gies. Heather is a freelance reporter and editor of the website UpsideDownWorld.org. She joins me now from San Pedro de Sula in Honduras. Thanks for being here again, Heather.

HEATHER GIES: Thanks for having me.

GREG WILPERT: So, first of all, tell us about the protests that have happened recently. Has the opposition been able to regain its momentum after the holidays? And what is the opposition and its candidate, Salvador Nasralla, demanding at this point?

HEATHER GIES: As you mentioned in your introduction, there were large marches again last Friday in Tegucigalpa. This came after relative calm over the holidays. We’ll have to wait and see if the national strike this weekend garners the same level of support of the protests in the weeks following the election because, despite this widespread outrage over the election results, there’s also a growing sense of fear among the population that could have an impact on the turnout.

During the march in Tegucigalpa last Friday, the police and military repressed the protests, really cracked down on those protests, which was something that we haven’t seen in Tegucigalpa in other thousand strong large, peaceful marches, in the capital city. There’s been cases of that kind of repression of roadblocks happening in and around the capital, and of course, in other parts of the country. But in the peaceful, thousand strong marches, we hadn’t seen that kind of response in the recent weeks.

So, police and military were using teargas, water cannons and there were also reports of live ammunition being fired and at least three journalists were also assaulted by military and military police. This is contributing to a generalized atmosphere of fear among opposition supporters. So, we’ll have to see what the turnout is this weekend for the national strike starting on January 20th.

At this point, the opposition has said that it’s willing to enter into a dialogue process if there’s international mediation of that process. And they’re only willing to do so if it starts before January 27th, which is the inauguration day because according to the opposition, once Juan Orlando Hernández is inaugurated as president, the government will be illegitimate.

GREG WILPERT: Regarding the deaths that have happened so far in these demonstrations, is there an idea as to how most of these deaths have occurred?

HEATHER GIES: According to the human rights organization, COFADEH which has been rigorously documenting the deaths and other human rights abuses that have occurred during the protests, the majority of these deaths have occurred at the hands of the state security forces, especially the military police force. That’s a hybrid of military police force that was created in 2013 when President Juan Orlando Hernández was the head of the National Party. Excuse me, he was the head of the National Congress.

He’s continued to advocate having that military police force in the streets, responsible for domestic security issues. That’s a controversial force and many of the deaths have been attributed to those forces.

GREG WILPERT: So, according to the opposition and many observers, the November 26th presidential election result cannot really be taken seriously since after the counting. The first count was that Nasralla would be five points ahead and then it was restarted and Hernández took a lead by a one and a half point margin. Now, Hernández has been declared the winner, officially. How widely is he being recognized as a legitimate president now? Both within Honduras and abroad by other governments?

HEATHER GIES: The question was wide, the election process, excuse me, was widely questioned. Of course, the Organization of American States ultimately said that they could not endorse the election results because of the irregularities and doubts rolling around the process. Luis Almagro, the Secretary General of the Organization of American States, ultimately called for fresh elections, which was really a major move and a major boost to the opposition in questioning the results of this election.

However, once the United States endorsed the outcome, officially congratulated Hernández. and did not support that OAS call for fresh elections, that really gave the seal of approval to this otherwise very questioned process. Some other countries in Latin America have followed suit. Mexico also accepted the results, Guatemala accepted the results. With the United States taking that position, it really took the wind out of the sails of the opposition in being able to challenge these results, even though the OAS Secretary General Luis Almagro had called for fresh elections.

So, we’ll have to see at the Permanent Council if the OAS as a whole backs that call for fresh elections. But with the United States not backing that call, that looks unlikely possibly, with its allies in the region. And that, I think, would really undermine the legitimacy of the OAS election observation missions more generally.

GREG WILPERT: So, you mentioned earlier that the opposition said it might be willing to participate in a dialogue with the incumbent president or reelected president. Is there any clear idea as to what might be the points of negotiation? I mean, assuming that the negotiations might actually start before the inauguration?

HEATHER GIES: It’s really difficult to find common ground in this process, of course, because the opposition still maintains that Salvador Nasralla is the rightful winner of this election, and does not recognize Hernández’s win. So, right there, there’s a major impasse that would need to be overcome. So, it’s hard to imagine how a dialogue process would move forward when essentially there are still two different people claiming themselves as the rightful president. Of course, one has been officially declared the President, Juan Orlando Hernández.

GREG WILPERT: So, you also mentioned, we also briefly talked about the national strike that’s planned for January 20 to 27th. Is there anything more you can tell us as to what they’re actually planning for that week of strike activity?

HEATHER GIES: Yes. So, the national strike is called, beginning on January 20th. This is expected to restart the roadblocks and other occupations that really paralyzed much of the country in the weeks following the elections. These are dispersed protests on major roadways, major entry points to big cities.

That will be taking place as of January 20th and continuing on January 21st. The opposition has said that its supporters should be in a constant state of mobilization. So, any and all actions are welcome in that respect because they’ve also highlighted calls for a larger economic boycott, including a boycott of fast food chains, major banks and other businesses. Basically, just a major economic disruption in order to make their voices heard.

That national strike is mainly focused on January 20th and January 21st. That’s Saturday and Sunday of this weekend. From there, major actions are again called for January 25th, 26th and 27th. The 27th being inauguration day and on the days leading up to the inauguration, 25th, 26th and 27th, again, road blockades are expected to start up from 6:00 a.m. in the morning, continuing throughout the day.

On January 27th, again, there are expected to be protests across the country, but with some concentration in the capital city where the inauguration will actually be taking place at the national stadium. But as I mentioned earlier, we’re going to have to wait and see what the participation is in these protests. Just given the numerous human rights abuses and very harsh crackdown that’s been taking place during these protests, which has really contributed to an atmosphere of fear.

In addition to the fact that a number of social movements have reported in recent weeks that some of their social leaders have been targeted with harassment, or attacks of other kinds, which they’re seeing as part of this larger terror campaign to try to discourage folks from protesting. So, we’ll have to see if that has some kind of impact in the participation.

GREG WILPERT: Okay. Well, we’re going to leave it there for now. But we’ll definitely come back to you once there are new developments. I was speaking to Heather Gies, freelance journalist in Honduras. Thanks again, Heather, for having joined us today.