US Unemployment Insurance Worse Than Most Other Developed Countries

Most unemployed persons in US do not receive any insurance, while European countries and Japan offer higher benefit levels that last one to two years

Most unemployed persons in US do not receive any insurance, while European countries and Japan offer higher benefit levels that last one to two years 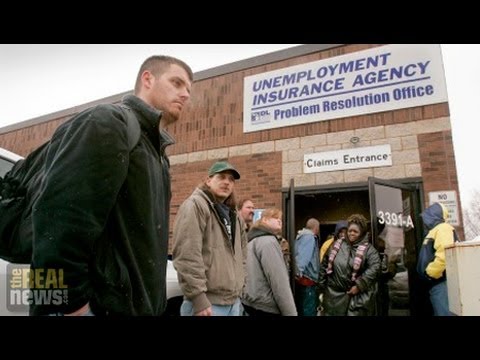 Long-term unemployment in the U.S. is twice as high as it was before the financial crisis. That’s according to the Center on Budget and Policy Priorities. Yet Congress did not extend unemployment benefits in the latest budget deal.

Less well known is how the U.S. has one of the least generous unemployment insurance systems in the world, both in terms of what it pays and how long it lasts.

Now joining us to discuss this is Ross Eisenbrey. He’s the vice president of the Economic Policy Institute, as well as a lawyer and former commissioner of the U.S. Occupational Safety and Health Review Commission.

Thank you so much for joining us, Ross.

NOOR: Ross, what’s your response to Congress failing to extend unemployment benefits? Now, your organization, the Economic Policy Institute, found that extending those benefits would support 310,000 jobs in 2014.

EISENBREY: That’s right. The cost of extending the benefits, as they have been over the last year, for another year is $25 billion. And putting that $25 billion into the pockets of the unemployed means that they’ll have money to spend on groceries and, you know, gifts for the holidays and paying their rent, paying for gas, all the things that people have to pay for. When Congress cuts that off on December 28, as it appears that it will, those people will–they will have no source of income. One-point-three million people on December 28 will be cut off from the only income source they really have. And that will be disastrous for jobs. It means that businesses won’t have those people as customers.

NOOR: So can you talk about how the U.S. differs from most developed countries regarding unemployment insurance?

EISENBREY: Sure. We have lower benefit levels. That’s probably the first thing to know, that in many countries, Germany and Japan, for example, benefits are 60 percent for the average worker of the previous wage, and 67 percent in Germany if you have children. In Japan, they have a kind of a two-tier system, but for long-term workers the starting benefit is 80 percent of the previous wage, whereas in the United States it generally varies between 25 and 45 percent. In some states in the South, the replacement rates are very low, but on average it’s more–it’s closer to 40, 45 percent. So benefit levels as a replacement of your previous income are much higher in most European countries and Japan.

Then you have the question of how long will benefits be. Right now we have a system put in place under President Obama in 2009 that has very long benefit levels by U.S. historical measures. Typically, regular benefits in the U.S. are only 26 weeks, whereas in most of the European countries–there are at least 52 weeks in Germany; depending on how old you are, benefits last for as long as two years, 104 weeks. In Denmark until recently, benefits lasted as long as four years, and now they’ve been cut back to two years. So in the United States, except in this extraordinary period of the terrible recession that we had, benefits are normally 26 weeks, and sometimes in particular states benefits can be an additional 13 weeks or so.

So on both measures, the U.S. fares much worse than most of the rest of the world. And the really sad thing is that most people in the United States who are unemployed don’t get benefits at all, because the recipiency rates are so low. Right now much less than half of all the people who are unemployed are receiving any unemployment benefits.

NOOR: And opponents of unemployment benefits, or at least at the same levels as exist in many other countries, would say that they decrease the incentive for people to work, and also it’s a drain on the economy. How do you respond to those two criticisms?

EISENBREY: Well, the second one is the easier one to answer, because it’s not a drain on the economy. In fact, it would be a spur to the economy, as I said. And this is not just the Economic Policy Institute. The Congressional Budget Office and almost all economists–economists at Goldman Sachs would agree that having money in their pockets means that those unemployed people will be able to buy things that they wouldn’t otherwise buy. They buy them from businesses. They buy services, they buy products. And if they can’t, if they don’t have the unemployment insurance, they won’t shop in those stores, and those stores will not hire as many people, and we will have fewer jobs. So if that’s the answered to is it a drag on the economy. No, it’s just the opposite. It’s a positive thing for the economy to have those benefits extended.

Now, will it make people less likely to work? In this sense: it makes it less likely that someone who was making, let’s say, $60,000 a year will take a minimum-wage job. They will keep looking for a job closer to the job that they had, a job that paid $60,000 that took advantage of, let’s say, their college education and their experience in an industry. It will make them somewhat less likely to take a minimum-wage job. But that’s a good thing, because there are plenty of people who had minimum wage jobs who are looking for work who would be displaced if that college educated $60,000 a year person took the minimum-wage job that they’re looking for. So it’s not a bad thing that it makes it easier for people to hold out a little longer for a job that is suitable to their experience, education, and background.

NOOR: Ross Eisenbrey, thank you so much for joining us.

EISENBREY: Okay. It was a pleasure.

Vice president of EPI since 2003, Ross Eisenbrey is a lawyer and former commissioner of the U.S. Occupational Safety and Health Review Commission. Prior to joining EPI, he worked for many years as a staff attorney and legislative director in the U.S. House of Representatives, and as a committee counsel in the U.S. Senate. He…