Israel Uses Refugees as “Currency” in Arms Trade with Africa

The latest development in the story of Israel's scandalous treatment of African Asylum seekers was revealed last week. After denying to even examine most of the refugees' asylum claims, deporting, and imprisoning those who stayed, Israeli authorities are now coercing them to sign on to so-called "voluntary" return as part of Israel's arms and trade deals with several sub-saharan African nations. The Real News' Lia Tarachansky speaks to activist Tamar Aviyah, attorney Assaf Vitzan, and S. an Eritrean refugee who made his way to Israel after years in Sudanese refugee camps, only to agree to "voluntarily" leave to Uganda to avoid Israel's massive desert prisons for asylum seekers.

The latest development in the story of Israel's scandalous treatment of African Asylum seekers was revealed last week. After denying to even examine most of the refugees' asylum claims, deporting, and imprisoning those who stayed, Israeli authorities are now coercing them to sign on to so-called "voluntary" return as part of Israel's arms and trade deals with several sub-saharan African nations. The Real News' Lia Tarachansky speaks to activist Tamar Aviyah, attorney Assaf Vitzan, and S. an Eritrean refugee who made his way to Israel after years in Sudanese refugee camps, only to agree to "voluntarily" leave to Uganda to avoid Israel's massive desert prisons for asylum seekers. 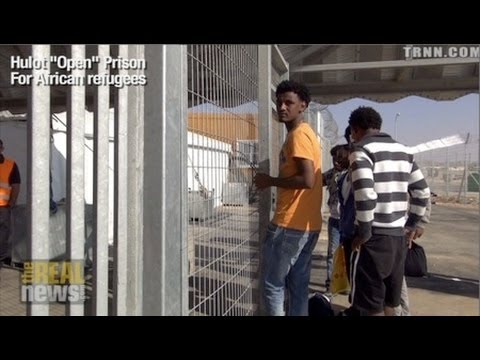 LIA TARACHANSKY, TRNN PRODUCER: The latest development in the story of Israel’s scandalous treatment of African asylum-seekers was revealed last week. After denying to even examine most of the refugees’ asylum claims, deporting and imprisoning those who stayed, Israeli authorities are now coercing them to sign on to so-called voluntary return as part of Israel’s arms and trade deal with several African nations.

Assaf Vitzan is an Israeli lawyer who works with asylum-seekers, trying to prevent their indefinite imprisonment and deportation.

ASSAF VITZAN, ATTORNEY, HOTLINE FOR REFUGEES AND MIGRANTS (SUBTITLED TRANSL.): Today we’re talking about roughly 50,000, 90 percent of whom are from Eritrea and Sudan, mostly from Eritrea. Abroad, their asylum claims a recognized that about 80 percent; in Israel, zero percent or almost zero percent. No one’s coming in anymore. An impressive fence was built along the southern border, and almost no new refugees are coming in. We’re talking zero to 10 a month. Only a few months ago, the Supreme Court canceled the anti-infiltration law amendment, so the government simply passed an even worse law.

INTERVIEWER (SUBTITLED TRANSL.): What legal avenues are open for refugees to fight for their rights in Israel?

MUSA, REFUGEE FROM SUDAN: My name is Musa /kiso/. I come from Sudan, Darfur.

TARACHANSKY: Even the UN body responsible for refugees, which has proven to be politically impotent, took a stand. Before quitting his position as head of the UNHCR offices in Israel, William /təl/ finally agreed to speak out, saying, “As UN High Commissioner, we have access to the prison, and we heard what the state offered them. Agreement to return under an ultimatum of jail … can’t be considered voluntary by any criterion. It is explicitly not voluntary return.”

Tamar Aviyah is a long-term activist who worked tirelessly with African refugees and was one of the few Israelis to help in the recent protest and strike against the government’s policies.

TAMAR AVIYAH, ACTIVIST ASSISTING REFUGEES IN ISRAEL: One of the main tools that the government is using also to induce the panic within the community and to make life just impossible to survive is to close down refugee businesses. This is sometimes with and sometimes without any relation to the legality or validity of their visas.

The immigration police started making mass arrests on the street. This, you know, spread a lot of panic in the street. They were just making arbitrary arrest, no matter what kind of paper you had. And there were a lot of rumors going on.

But the great success of the government strategy is massive voluntary return.

TARACHANSKY: According to UNHCR statistics, more than 80 percent of refugees remain in the region of the countries they flee. While the Israeli right wing portrays the refugees as a serious demographic threat, they make up less than 0.4 percent of the population under Israel’s control. In a comparison, the city of London has five times the number of asylum seekers of Israel.

TARACHANSKY: Why is Israel against resettling these refugees to other countries if it wants to get rid of them?

AVIYAH: Well, Israel wants to get rid of refugees, but it doesn’t want refugees to get a good solution, because then that would give African refugees an incentive to come to Israel as a stepping stone on the way to a European or Canadian or American country or any other country where their human rights would be respected as refugees.

TARACHANSKY: Because of the security situation in Eritrea and (north) Sudan, Israel cannot legally deport the refugees there. It’s therefore encouraging them to leave on their own, either to Sudan or other African states. Speculations began this summer when, after a long campaign of persuasion, Israeli representatives tried to secure the destination, offering various sub-Saharan states arms and trade deals. Last week, it was finally revealed that the refugees are being sent to Rwanda and Uganda, and potentially also to Kenya.

PRESENTER, NTV KENYA (VOICEOVER): Uganda will also allow migrants to use its territory as a transit point to return to their home countries or go elsewhere. In return for the favor, Uganda has been promised to be furnished with an undisclosed sum of money and military equipment.

TARACHANSKY: This effort predates even the previous governments of current prime minister Benjamin Netanyahu. In 2008, then prime minister Ehud Olmert offered to pay various African nations $1,000-$1,500 per refugee. The Israeli financial daily globes reported in tooth June 2008 that the decision was made to try and sell the refugees to African countries. Following the decision, the Foreign Ministry turned to every African nation with which Israel has diplomatic relations, including Kenya, Ethiopia, Uganda, the Ivory Coast, and Benin, and offered to pay for taking in the thousands of refugees who came to Israel.

While during Olmert’s leadership the African states refused, Netanyahu made them a better offer. In 2009, Israeli Foreign Minister Avigdor Lieberman visited several African states, including Uganda, Rwanda, and Kenya, with an entourage of arms dealers. While no deal was signed on the trip, his deputy, Danny Ayalon, continued the visits. Then, in 2012, Netanyahu appointed a special envoy, former Mossad agent Hagai Hadas, who was a key negotiator in the release of captured Israeli soldier Gilad Shalit. Hadas made a number of undisclosed trips, this time offering $8,000 per refugee and a trade package including agricultural training, technology, and arms.

When the Israeli daily Haaretz succeeded in lifting a gag order on the deal in August last year, it was revealed that the country to which the government intends to ship the asylum-seekers was indeed Uganda. This week, Haaretz revealed some refugees are also finding themselves in Rwanda.

AVIYAH: They’re a currency, one of many currencies in Israel’s economic interest in arms trade in Africa, and also its colonial interests.

VITZAN: These agreements were never brought to light. We have no idea what rights returnees get. We have reports of people who found themselves in Uganda and Rwanda and didn’t get any papers, visas, no status, and their asylum claim wasn’t looked at, and they became stateless. The situation is very serious.

TARACHANSKY: S is an Eritrean refugee who made his way to Israel from years in Sudanese refugee camps. Following the coerced effort to get him to leave the country, he decided to sign the agreement and go. For fear of imprisonment were he to find himself back in Eritrea, he refused to be filmed.

S (SUBTITLED TRANSL.): We thought we were human beings, but when we came to Israel, we found out we’re worthless. Us black people are not human beings here. That’s all I can say. So I’d rather go to Uganda. At least they’re black too.

INTERVIEWER (SUBTITLED TRANSL.): But you know that many who sign to go to Uganda, and when they land they find themselves in Sudan? [sic]

S: They leave us without a choice. We have no choice. Here, the people, the government, the laws, it’s really not the same Israel is what we came. They call us “nigers” and a “cancer”. If I had a citizenship to anywhere–but I have no citizenship.

INTERVIEWER: What would happen if you return to Eritrea?

S: I fled the mandatory [18-year-long] army service. They’ll either put in jail for life or kill me.

And from there, there are two options. Either they are released under limiting conditions and they may not leave Khartoum, so their movement is limited. And they have a police file, sometimes their whole family has a police file. They have to report to the police either daily or once a week. Many of them are put under pressure to become informers for the police because they’re in a vulnerable position. All of them, all of the passports are stamped with “cancel”, so they can’t use their passport anymore–they will not be able to leave Sudan with the passport. These are the ones that are released. And then there are the ones that are probably in jail.

TARACHANSKY: Since the interview, the Organization of Sudanese Refugees in Israel recorded 13 deaths of returnees who were tortured, when nearly 1,000 remain in jail in Khartoum. According to international standards and law, if refugees decide to voluntarily return to their countries of origin, the host country–in this case, Israel–ought to provide them with comprehensive legal and return counseling, information, sufficient time to prepare, reintegration support, assist in their ability to find housing, employment, health care, and education, monitor their return, and so on. Instead, the returnees report that once they’ve landed, often not knowing to which country that there are even being sent to, they have no contact with any official representatives from Israel or the country to which they were sent after their arrival, and no one assists them or deals with their needs.

The government’s response was that all actions are taken in accordance with international law.

For The Real News, I’m Lia Tarachansky in Tel Aviv.