Behind the scenes of “A Real Nigga Show” 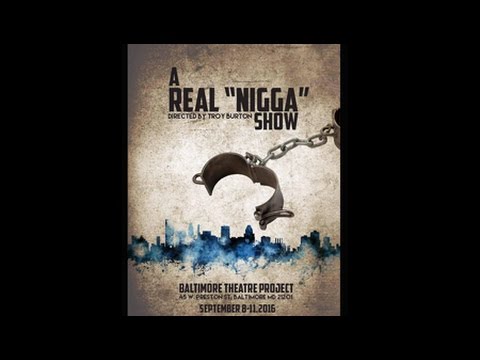 TEXT ON SCREEN: The Real News hung out at rehearsal with the cast and director of the original play “A Real Nigga Show”. They discussed why they chose what some perceive as a controversial title and why the show was developed.

CHARACTER: So I hear that there are these black guys from Baltimore who are doing a show. And the name of the show is called, uh, A–phew. A–um–A Real–. Hmm. ‘Kay. Phew. A Real “N-I-G-G-E-R” Show.

JOSHUA DIXON, ACTOR AND WRITER: How are you doing? My name’s Joshua Dixon.

JACKSON: And we are the cast of A Real “Nigga” Show.

DIXON: I’m acting in this play to send a message to all our youth between the ages of 18 and 25 that there is still time, and if there is time, the time is now.

HARDY: Oh, man. I’m acting in this play, man, you know, to heal, to enlighten and take people’s level of consciousness to a higher level.

JACKSON: I’m in this play because we can always talk about how we need to work together and that we need to come together, but here I have a piece where I truly get to work with brothers that I love and that we have respect for each other and we value each other’s life. And we get to show that example on stage in front of everybody else.

TATE: I’m acting in this show because, you know, to piggyback off of what Robert said is, you know, for enlightenment, to help enlighten other people, and also to enlighten myself. You know, I’ve learned a lot, working with these guys, just about what other people go through. I grew up in the county, so a lot is–not a lot of it, but some of this stuff I’ve been through and some of it I haven’t. So, you know, it’s good learning process.

CAREY: I’m acting in this play because it’s very necessary. I believe it’s necessary to get your point across by any means–through art, through acting, through talking and expressing yourself the best way we know how.

CHARACTER: Another man can hate me because of my skin, my strength, my soul. Another man teaches the Asian man to treat me cold. And the black man, whom I feel closest to, calls me “his nigger”. I drive a nice car, I have a nice home, so I’m “that nigger”. I’m married, and I take care of my children, so I’m a “good nigger”. I choose not to resort to violence, so I’m a “peaceful nigger”. No matter how much money I make, I can’t escape that name.

CHARACTER: I heard a black man in an argument call another black man a “bitch nigger” not realizing all he did was reverse what slave masters used to call my sisters.

CHARACTER: I’ve even gotten away from disrespecting my sisters, but to many of them I am a “lame nigger” ’cause I’m not blunt-smoking, finger on the trigger, ready to destroy what looks, walks, talks just like me. I shouldn’t be afraid of my own people, but sometimes I’m afraid of what we’ll grow to be.

CHARACTER: Afraid of being disgraced, humiliated by, yes, a racist society, but most importantly ourselves. So am I afraid of me and what I will come to be? Because what happens to you will eventually happen to me.

CHARACTER: We’re all in the same class in this country.

CHARACTER: We’re all in the nigger class.

CHARACTER: But not me. I’m not your nigger. I’m your brother.

JACKSON: We titled the play because it’s an elephant in the room where, you know what I mean, we’re not running from the word. We’re talking about the origin of the word. And the play for the most part is about the life experience of the black man. And oftentimes the underlying theme is you thought I was him. So as black men, we’re one of the only people that we’re judged before you even take a chance to get to know us and find out really who we are. So that’s what the play is about.

And the title–we don’t apologize for the title. You know, A Real “Nigga” Show” speaks directly to what it’s like being a black man in America. And right now, with so much going on, there’s so much trying to make us not be proud of who we are. And we are. People can choose to use the word if they want to or not. That doesn’t matter. That’s not what we’re trying to tell you. What we’re trying to show you is the black male experience in America.

DIXON: Just to add on to what Eze–to his point, the second point was to provoke thought, because we are in entertainment. And so that is the title should be able to grab you and gravitate people towards your show. So that was another tactic that was used, to provoke thought. So don’t get hooked up on the word “Nigga”, and just come see the show.

OFF-CAMERA: And we ain’t never changing the name.

TATE: And another thing is just it’s another way for black men to be vulnerable, ’cause we’ve got to be so damn tough all the time, and this is a way for us to express ourselves without feeling like we have to put on this defense all the time. You know?

TROY BURTON, DIRECTOR: The Real “Nigga” Show is a choreopoem. And it was born out of necessity, where a group of former students of mine, we got together, and they wanted to create a piece for the stage. So they came to me, and me being the theater teacher, I said, hey, these guys, they really want to do something, and as an adult, I need to step up to the plate, and let’s create something. And we were just going over several ideas of what we wanted to do. And being that they were poets as well as actors, we decided to combine both and make it a choreopoem, which is a story that’s told through poetry and music and movement. And it will give voice to what the black male is going through in Baltimore at that time. That was 2003.

Originally we were going to call it Endangered Species, but then the idea just came out and said, hey, we might as well call it A Real “Nigga” Show. And then that actually stuck. And the whole concept behind that is to provoke thought, to get people thinking, to get people talking. A lot of media in Baltimore wouldn’t print the name, or a lot of people wouldn’t want to see the show because of the name. However, it’s there. It’s there in music, it’s there in print, in poetry, it’s live on stage in a lot of productions. It’s in our schools. So why not put it together in a theatrical piece that can tell a story, and tell a story about healing, about self-preservation for the African-American male?

Well, the whole idea was about ownership, creating a work that we would produce ourselves. Every production of A Real “Nigga” Show has actually been produced out of my own pocket, ’cause it’s about us owning our own work. And the guys have been on the production team of selling the show, the marketing aspect. So we’ve also worked on the stage side with the writing and the development, the choreography, but we also work behind the scenes with marketing the show. It’s about African-American men owning their own product and knowing how to market it and captivate an audience.

The creative process for producing A Real “Nigga” Show was actually life based in reality. I’m a former teacher with the Baltimore City Public Schools, and I also worked with afterschool programs like Arena Players youth theater. So gathering my experiences with working with young people, I knew that in Baltimore there needed a piece where they can give their own voice to but they can also give voice to other people that they know, stories about people that they know in their families, their neighbors. And it’s about showing the image of the African-American male.

So the Eubie Blake Center has been very instrumental, because it’s been a place where the show was actually–a lot of it was written here, workshopped here, rehearsed here. And even we’ve done some small performances right here. So it’s about the community working together.

And also the Baltimore Theatre Project, which opened their doors to us graciously and have been supporting us since the first time we did it in 2003.

A Real “Nigga” Show will open on 8 September. That’s the show for high school students which are free, and $5 for college students. And then we also have general admission. But it will run September 8, September 9, 10th, and 11th at the Baltimore Theatre Project, 45 West Preston Street. If you’re interested, you can purchase a ticket here at the Eubie Blake Center or you can purchase a ticket at the door at the Theatre Project. You can also go on their website, www.TheatreProject.org.

CHARACTER: Even though I might not agree with what you do–.

CHARACTER: You are still an extension of me in this godly historical family tree.

CHARACTER: It’s time for a revolution.