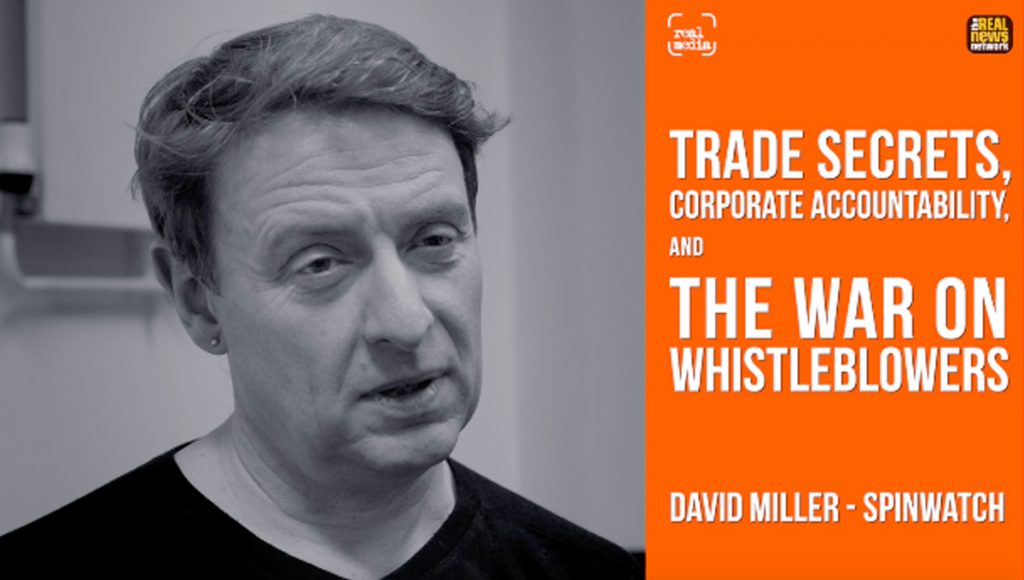 DAVID MILLER: You’ve brought in this new trade secrets directive, which is intended to protect corporate property, allows corporations to sue or take to court people who use their secrets, or reveal their secrets. And of course that’s a problem, because it means that they will be able to take whistleblowers to court. It’s a prohibition, essentially, against freedom of information, of transparency, around corporate power. So that’s a quite significant problem, in terms of encouraging transparency on EU decisionmaking, and indeed, of course, UK decisionmaking, since the UK government is going to put the directive into UK law with even less protections than the EU is proposing at present.

It means that corporations are more able to cover up their misdeeds. They’re more able to keep information in-house. Which could, in principle, or should perhaps, in principle, in terms of public interest, be shared in public. Allows them to evade responsibility for their actions in a very significant way.

I work at the university. And universities are supposed to produce scientific, or social scientific, knowledge in a way which is unbiased, which gets to the heart or the base of any particular social problem or issue. Think tanks are there to pursue the interests of their funders. Think tanks are not independent research. Institutes, they largely do not produce academic research. The research they do produce is usually not peer-reviewed, which is the key check on the standards of science amongst university scientists and social scientists. Think tanks are fake academic institutes, pretending to produce genuine research. But what they really do is produce material to support the interests of their sponsors, and their sponsors can be large corporations, or conservative foundations giving money to try and push government policy in an even more neoliberal or neoconservative direction than it already is in.

From think tanks, is only a small part of the problem of deception, misinformation, and manipulation which neoliberalism brings with it. It created, effectively, the public relations industry, the lobbying industry. Think tanks are a part of that industry, which tries to stop public debate and to make sure that the interests of the sponsors of those organizations and industries prevail in government policymaking. So how do you solve that problem? Well, first of all, you have to influence a number of transparency measures across the whole of the society, not just governments and lobbyists, and think tanks should be forced to disclose how much money they get, where they get it from, what it’s for, and information about what they do with it. First of all, they should be forced to disclose their level of parliament and engagement with policymakers. But they should also be required to disclose how much money they spend on academic research, or activities in courtrooms, or in health service or in science, the whole range of other areas where they are active.

So for example, there’s a government advisory system where scientists are brought together to advise government on the safety of chemicals, or whether drugs should be prescribed to patients, et cetera. And those systems have conflict of interest declarations attached to them. They’re an effective [inaudible]. There’s no body overseeing them, being which private corporations might try to influence experts who are advising government of potential consequences for the health and wellbeing of millions of citizens. So the transparency regulations would need to go across the whole range of the society, not just the parliament in Westminster, but also universities and hospitals, and law firms, et cetera. There needs to be a step in transparency, first of all.

Second of all, we need to start to manage down conflicts of interest. First, scientists, where scientists advising government on sugar and nutrition, gets money from Coca-Cola, they should no longer be allowed to advise. It’s straightforward. Shouldn’t be allowed. It’s allowed at present, amazingly enough. So it’s a question about managing down conflicts of interest. And that kind of process, depending on how far it goes, how fast it goes, will eventually manage out the system of think tanks altogether. We wouldn’t have think tanks. There’s no need for think tanks at all in our system. No need for lobbying companies, either. If you want to know how the world operates, you go to academics and scientists. If you want to know what the interests, or ideas of business, or any citizens are, you ask them. You don’t need to have lobbyists to distort the policy process.

So essentially, what you would need to do is, or what to do, is to increase transparency and conflict of interest rules and regulations, to manage those conflicts out of the system, to essentially decorrupt the existing policy system, which is at present corrupted by corporate money.

I put what is the advisory committee in business appointments, it, I was going to say regulates the passage of former ministers into the private or public sectors after they leave their jobs as ministers. It doesn’t actually regulate, and the clue to that is the title of the committee. It’s the advisory committee on business appoitnment. So it takes applications from former ministers who might want to go off to work for a pharmaceutical company, or an arms firm, or any other delightful company like that. And they advise on whether they should be doing that, or how long after they leave their job they should be doing that, and whether they should be discussing what they learned as health minister with [inaudible]. And it’s an advisory committee in the sense that it advises whether the person should do that. No one has to pay any attention to it. It’s not binding, there’s no regulation. It’s a joke of a committee. That’s not just me who thinks that, that’s the actual parliamentary committees themselves who have examined this, examined it to say it was a joke and should be abolished, and instead they should have some proper regulation of the revolving door. Because it means that corporations can buy up political expertise, and in particular, contact in the political world with ministers who’ve been there to serve the public interest. Either ministers, politicians. Strange as it might seem, old-fashioned as it might seem, either they are to represent the public, the electorate, or they’re not, and they shouldn’t be going on to represent corporate interests after they leave public service. They probably should go back to whatever they were doing before.

Spinwatch is a website which monitors, does public interest reporting on public relations, spin, propaganda and the link. And it’s a project of a nonprofit company called Public Interest Investigations, which was set up in 2005. And we essentially do investigations of corruption, of lobbying, of think tanks. We do stuff on propaganda, on war and foreign policy, on Islamophobia and racism, and a whole range of other things. So Spinwatch is a website which publishes our investigations. And we also have another website called Powerbase, which provides profiles of important organizations and individuals who are engaged in lobbying, or the think tank world, or in corruption in some way. Powerbase is written by a variety of people, who are either working for us or volunteers. But it’s done only by people who use their public, real name, and all edits they do can be tracked. So it’s a way of checking back what’s been put in there, and how accurate it is. And we have a policy of correcting mistakes under the date of publishing. A right to reply, should anyone wish to reply, an organization or individual with which they are associated.