Activist: Organizing Local Communities is the Only Way to End Police Killings 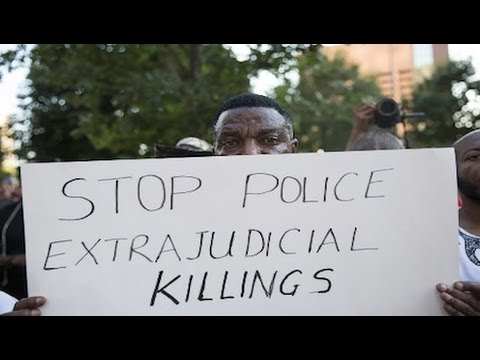 In light of the recent spate of police killings of African-Americans, I thought I would take this opportunity to look and see what has been occurring. And so today I have with me as my guest Rosa Clemente, which is the Green Party vice presidential candidate from 2008, but also the co-author of a study that looked at the, the rate in which African-Americans were being killed by law enforcement officers. So please join me in welcoming Rosa Clemente.

Rosa, how are you doing?

ROSA CLEMENTE: Good. Thank you for having me. I appreciate it. Let me just correct–one quick note. The report that we’re going to talk about, I was part of the team that helped distribute it and get it out. The two main researchers were Kali Akuno of the Malcolm X Grassroots Movement and Arlene Eisen.

CONWAY: Okay. Okay. All right. So could you tell me, then, a little bit about that report and what you found doing that research?

CLEMENTE: Well, in 2012, and this was before Trayvon Martin, but it was really after the Troy Davis execution, Kali Akuno and other forces in the Malcolm X Grassroots Movement decided to embark on doing just a one-year project to try to map specifically the African-American men, women, and killed–men, women, and children that were killed extrajudicially, as well as vigilantism. So let me go back and say, right after Trayvon Martin was killed. So in this report, just in one year, Arlene Eisen, the main researcher, was able to crunch the numbers–and this was by really just calling police stations, calling to newspapers.

Even though four years doesn’t seem like a long time, it kind of is in terms of where technology and how we can gather information around police violence is happening. But we came up with the conclusion that every 28 hours, an African-American man, woman, or child was being killed by the police, security guard, or vigilantes. And that report was out in early 2013. And in fact, there were a lot of newspapers that are now mapping police violence that were saying that our numbers were wrong, and our research was flawed, and our methodology was wrong. And now they’ve used a lot of that research to create their own kind of way that they’re mapping police violence, particularly against all people. We specifically focused on African-American men, women, or children.

CONWAY: And for some reason, it seems like the number of African-Americans killed by police have increased. Does that appear to be the case, from your continuing looking at this situation?

CLEMENTE: Well, if we look just at the last 48 hours, we have two killings, literally. Alton Sterling and [Philandro Castile]–I don’t pronounce the–I don’t want to mess up the brother’s first name.

CLEMENTE: [Castile] is his last name. Just what we’ve been seeing on livestream, unfortunately. And then as well there’s two other killings that have not received as much attention, but have happened in the last two days as well. Alex [Eunice], 18 years old, was killed by San Jose police yesterday. And on July 5, Pedro Villanueva was killed by the California highway patrol. And those were Latino brothers. So right there, in two days we’ve seen four African-American Latino men killed by the police. So that would actually make it every 12 hours if we were to add in Latino, Latina, and Latinx folks that are also being killed by the police.

So yeah, it’s gotten a lot worse in those four years since we put out the report, the killings.

CONWAY: Why do you think this is happening? How come this increase all of a sudden over, say, the last four-year period? What’s, what’s changed?

CLEMENTE: I think the fact that George Zimmerman was able to get away with killing Trayvon Martin, even though he wasn’t a police officer, set up a new way of devaluing and dehumanizing, particularly, black bodies. And then no police has been held accountable for any killings that have happened. There’s been little to no indictment. Everybody has seen what’s happening in Baltimore at this very moment, with all the officers getting off around Freddie Gray. One officer, Peter Liang, was convicted of manslaughter, and the judge gave him six months probation.

So obviously, the police know that they can kill black and brown people and completely get away with it. Up here in Albany, New York, the police last year in April tasered to death a young brother by the name–well, he was 35–brother by the name of Dante Ivy, and those police were put on administrative leave. And two months later, they got back on their jobs. And currently, at this time, they patrol the same area where they committed the murder against Dante Ivy. So they’re getting away, literally, with killing us, even with cameras. So why would they stop?

CLEMENTE: Yeah, I don’t think there’s been an officer convicted since the officers were convicted in the Rodney King case after the first trial, where they were found not guilty and [inaud.] and where the feds came in. And that was what, 1993? I don’t remember any cops since then that the federal Justice Department has successfully indicted and prosecuted all the way to its conclusion.

CONWAY: Okay. Well, I’m just curious, now, because obviously we pay taxes, we meaning people in the African-American community, and supposedly officers are there to serve and protect. And in all too many cases here in Baltimore, you find that the officers are not living in Baltimore, not from Baltimore, from surrounding regions or states. Is that a problem? Is that what the problem is? Or are the police actually hired to do something other than serve and protect the people in the community?

CLEMENTE: I mean, I think the main problem is white supremacy, and that’s how they all function. And systemically, that’s how it functions. So, right, it doesn’t matter that the cop is Asian-American, or the cop is black, or Latino, or white. They kill black people. And they kill brown people. And they beat up young black and brown children, or they kill them, young black and brown children, as well.

So no, I don’t think any of these reform measures, whether it’s body cameras, police living in our community, civilian oversight boards, complaint review boards, I mean, I’ve been organizing around police brutality for 20 years. I helped create the, the civilian complaint review board here in Albany, New York. And as I returned here 15 years later, it’s completely ineffective. It’s not ever charged or said that one cop in this area should be charged. So no, none of these reform things, or the police being in our neighborhoods as neighbors is going to alleviate the problem at this point.

CONWAY: Then what can the communities do to protect themselves?

CLEMENTE: Yeah, I mean, I think there’s something to really be said about, like, how we locally organize, lock down our communities, protect our communities, and protect ourselves. And I think that’s the kind of work we need to do. We need to locally be organizing, because this doesn’t just happen in big cities. We hear about it in big cities, or now we’re seeing more footage. But there’s millions of other places that black and brown folks live that are not, quote, “urban environments,” where police brutality is atrocious and horrific, and people get killed all the time.

I think what these communities are doing different is locally doing the work to organize, attending as many government meetings, pushing for defunding the police. And I think that’s the only thing we can push for on a national level. These police departments need to be defunded. There needs to be a federal database that keeps track of all police killings. All police departments need to be demilitarized. And there should be some type of system at play that [fines] or does something automatically, you know, when the police do kill us.

So beyond that, I mean, I’m an organizer, so my thing is people. We’ve got to publicly educate people, we have to raise consciousness, and we have to keep organizing. That’s the only way we, we, we even stem the tide of what’s happening now and what will continue to happen as fascism continues to rise in America. We’re going to bear the brunt of that fascism.

CONWAY: Okay. So we’re going to revisit this again, unfortunately. So I will probably have you back to kind of give us an update, and kind of give us at least some ideas of how and what we can organize in the near future, if you’ll come back.

CLEMENTE: I will always take an invite from the Real News Network. Thank you so much for doing the work that you all do.

CONWAY: Okay, so thank you for joining me.

CLEMENTE: Thank you. Peace, everybody.

CONWAY: Okay. And thank you for joining the Real News.

Rosa Clemente is the president and founder of Know Thy Self Productions, which has produced four major community activism tours and consults on issues such as Hip-Hop activism, media justice, voter engagement among youth of color, third party politics, intercultural relations between Black and Latinx, immigrants’ rights as an extension of human rights, and universal…