Hours before she faces trial, we speak with #BLMLA7 activist Rosa Clemente

Hours before she faces trial, we speak with #BLMLA7 activist Rosa Clemente 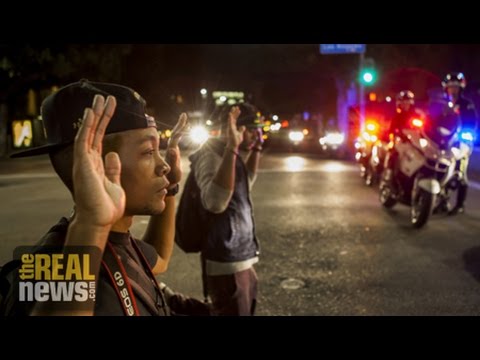 On November 26, 2014, amid nationwide protests for the non-indictment of Officer Darren Wilson for killing Michael Brown in Ferguson, a group of Black Lives Matter activists coordinated a nonviolent shutdown of the freeway 101 in Los Angeles, California. The protests were a spontaneous reaction, where people rallied to be seen and heard, but more than 300 people were arrested in LA during a four-day period of protests held in solidarity with the uprising in Ferguson. Several of those arrested are seeing their trial begin this week. The trial is now known as BLMLA7. Those standing trial are Povi-Tamu Bryant, Damon Turner, Jas Wade, Todd Harris, Haewon Asfan, Sha Dixon, and Rosa Clemente.

Joining us now from LA to discuss what is happening is Rosa Clemente. Clemente is a longtime activist, journalist, scholar, and former vice presidential nominee for the Green Party. Good to have you with us, Rosa.

ROSA CLEMENTE: Thank you for having me.

PERIES: Rosa, after this interview you are headed to court for your trial. What are you and other members of Black Lives Matter facing in terms of charges, and what will happen when you go to court?

CLEMENTE: Well, yes. So first and foremost we’re BLM organizers and we’re in the LA chapter. And although over 300 arrested happened in those four days, the only people that have been charged and put for trial have been members of the BLM LA chapter. Including two of our comrades last week, Evan [Abdullah] and Luz Maria Flores, who were convicted of their charges. And we have another member, Jasmine Richards, who has charges in Pasadena.

So I think it’s really important for people to understand that also, outside of all the BLM chapters throughout the country, over 35, our charges are the only ones that have not been either pleaded out with a good plea for those organizers or activists, or completely dropped. And our trial started yesterday, and jury selection continues today. It’s expected to take two weeks, and the DA has called 20 witnesses and they are all police officers.

PERIES: Now, Rosa, first of all, describe for us what happened that particular day. How did the action evolve, and how did you end up getting arrested?

CLEMENTE: That was in response to the non-indictment of Officer Darren Wilson. And there had already been plans around the country from taking the lead of the people of Ferguson of what would be activities and protests that would happen if there was not an indictment. And there wasn’t an indictment. And we were out that night in the streets, and the next day some of us participated in our lawful right of civil disobedience to make the point that it was no longer tolerable, and it could no longer be comfortable to continue to kill particularly African-American, and increasingly Latino people in this country, and get away with it.

PERIES: Now, March 8, which is today, marks a very interesting anniversary. It’s the 45th anniversary of the break-in at an FBI field office by eight peace activists that exposed COINTELPRO and the FBI counterintelligence program, as most of you know. It was used to infiltrate and neutralize activities of groups such as Black Panther Party and the Socialist Worker Party, among others. Now, so many years later, you guys are facing the same kind of thing. Tell us about what’s actually happening to organizations like Black Lives Matter, and put this trial in that context.

CLEMENTE: Yeah, I think the context is, especially in light of a kind of resurgence and emergence of the history of the Black Panther Party for Self Defense, through Stanley Nelson’s documentary, in particular, in the last month or so, and the pop culture moment of Beyonce at the Super Bowl, there’s an interesting, you know, not a juxtaposition, but the correlation of the state continuing to have political persecution against organizers and activists to stop our activities.

And I don’t compare us to the Black Panther Party for Self Defense. I mean, the Black Panther Party was annihilated. Some are still imprisoned. And it was a federal government program. But I do put us within the folks that are politically persecuted. In particular, LA has a very dark history right now around what is happening with policing, with the chief out here of LA, the increase in police killings, and that this is the only city that is trying to put us in jail for exercising our constitutional right.

So I think folks really need to understand that it might not look the same, but the fact that particularly BLM as a network seems to have most of the arrests, and then have to spend time within the criminal justice system, and now we’re going to a full trial, a two-week trial for two misdemeanors. People really have to think about is that really for two misdemeanors, or is that about trying to send a chilling effect that’s saying that the more we push back, the more the state is coming at us.

PERIES: Now, a lot of people and [inaud.] have come to, it’s come to light that organizations like Black Lives Matter is also being infiltrated, in spite of the fact that in 1971, because of the COINTELPRO and the challenge to it found that this was a violation of their First Amendment rights, and also First Amendment Speech Rights. And however, today activist groups are facing surveillance by the FBI. Is this case going to challenge those kinds of surveillances that are going on right now?

CLEMENTE: No. I mean, we don’t have the capability to do that through our trial. What we can do is, again, continue to politically educate particularly those that are in the Black Lives Matter network or support black lives, that we have to understand, we’ve already probably been infiltrated as an organization. We might know, we might not know, but what we do know is that even without all of that and what particularly surveillance looks like for organizations, that those of us that are the organizers, those of us that are the activists, it’s not only that they’re taking us to trial, it’s that they want us not to be able to participate in any other protest or rallies.

In fact, part of our plea agreement, if we took it, including not only jail time but that for two years we won’t partake in any protests or rallies. And we’re not willing to, to not be on the right side of where this movement and where the people that are organizers and activists are fighting for and going to. So there are some similarities in what happened in the past. But I think the state is actually very open and clear on what it wants to do, and it was to silence all type of dissent, and all type of revolutionary activities coming from more radical people in this country.

PERIES: So Rosa, you are headed to court. What do you expect will happen, and to your comrades at Black Lives Matter?

CLEMENTE: Well, I mean, jury selection continues today. And the DA has asked for a special set of questions to the jurors. Folks can go on my Twitter account to see. I posted the picture of the questions. I’ll send it to the Real News. And they all pertain to asking the jurors feelings around police brutality, Ferguson, and Black Lives Matter. So, because we are so clear that this is a political case, we know that we stand on the right side of history, that we’re part of a tradition, and we’re going to go in there and we’re going to fight our fight with our lawyers. And whatever the outcome is, this is part and parcel of the sacrifice that some of us are willing to make for the struggle.

PERIES: Rosa Clemente, I hope you continue to report to us about what’s going on in terms of this case. It’s vitally important, not only to Black Lives Matter but the rest of the country in protest and dissent, and our democracy. So thank you for doing this, Rosa, and looking forward to having you back, and all the best as you head to court.

CLEMENTE: And thank you to the Real News Network for being one of the few outlets out there where we could really uplift the story and tell the story of organizers and activists. So we appreciate you as well, thank you.

PERIES: And we appreciate that. Thank you so much. And thank you for joining us on the Real News Network.

Rosa Clemente is the president and founder of Know Thy Self Productions, which has produced four major community activism tours and consults on issues such as Hip-Hop activism, media justice, voter engagement among youth of color, third party politics, intercultural relations between Black and Latinx, immigrants’ rights as an extension of human rights, and universal…

When Teachers Win the People Win & Put Privatization on the Run

Los Angeles Teachers Prepare to Strike: An Organizing Drive Long in the Making