Why is Rocky Anderson Running for President?

Why is Rocky Anderson Running for President 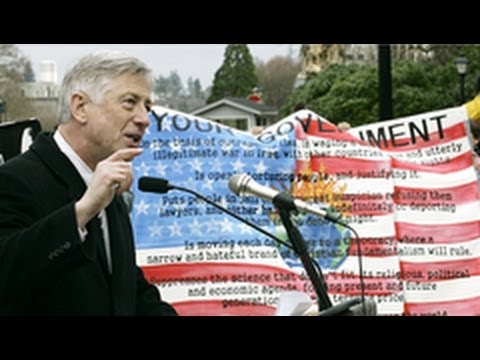 Well, if you watch television these days, you’d think there will only be two candidates for president, President Obama and Mitt Romneyâ€”the most likely Republican representative. But in fact there is another serious challenge, serious at least in terms of his ideas. I guess it’s yet to be determined how serious it can be in terms of actual effect. That person is Rocky Anderson. Rocky is the leader of a new Justice Party. He’s running for president, and he was the mayor of Salt Lake City. Thanks very much for joining us, Rocky.

ROCKY ANDERSON, U.S. PRESIDENTIAL CANDIDATE, JUSTICE PARTY: It’s great to be with you. Thank you.

JAY: So a lot of our viewers may have seen some of your interviews on some of the other, I guess, alternative networks. You’ve also been on some mainstream television when you announced the Justice Party. So instead of going over your whole program againâ€”and we may even link to some of those interviewsâ€”I want to jump into one point that you’ve been focusing on, and that is the issue of money in politics. And you’ve been talking a lot about the need for a constitutional amendment to overturn the Citizens United Supreme Court decision. But that money in politics certainly existed before such a decision. You know, the 1 percent of the 1 percent has been more or less dominating U.S. politics, almost, maybe, since there was a United States of America. And you talk about the need for new paradigm, sort of addressing the system, not just changing the faces of the president. So how do you grapple with this sort of deeper problem?

ANDERSON: Well, our system has been rotten to the core for many years. The Citizens United case just made it so clear how bad it really is. Finally the American people are sitting up and paying attention.

I was on the board of directors of Utah Common Cause for a number of years, going up to our state legislature, urging them to pass legislation to prohibit gifts by lobbyists to legislators year after year. They acted toward us with such utter disdain, as if there weren’t a problem with legislators sitting on the front row of Utah Jazz games or being given golf packages or ski packages. It is just amazing how bribery has taken over our system of government, how those with the wealth really are in control. And it is at the bottom of every major public policy disaster in this country.

Why are we the only industrialized nation on the face of the planet without a central health care coverage for every citizen? It’s because of the corrupting influence of money in our system, from the health insurance industry, from pharmaceutical companies. Same reason why we have these high drug prices. Why do people go to Canada to get the same drugs that they could buy in this country, but at much lower prices in Canada? It’s because of the corrupting influence of money from the pharmaceutical industry.

JAY: Now, one of theâ€”at the core of a lot of this is the control of the banking sector. And when it came time toâ€”when the banking sector, after their own casino activities essentially led them to collapse and they needed a public bailout, that seemed to be a moment where there could have been some real challenge to that power, ’cause certainly the power of money in politics comes from this concentration of ownership. And when the big banks were on their knees and they needed the public money, one would have thought that was an opportunity to do something about it. So if you’d been president in 2008, what would you have done differently?

ANDERSON: Well, certainly we needed to stabilize our financial system, but there should not have been this carte blanche given by Congress and the White House as we’re giving the banking sector billions of dollars, but without conditions. Nobody said you’ve got to be providing this money for loans for small businesses, for people who are trying to get into their first homes, pay off their mortgages, all these millions of people that are underwater in their homes. There were none of those protections for the American people. It was just another bailout for the banks, and then these folks kept stuffing their own pockets with millions of dollars.

How anybody that got us into these problems in the first place, much of it through financial fraudâ€”and we know that nowâ€”how they even maintain their positions of power in these entities, let alone getting the bonuses that they’ve taken away with taxpayer moneyâ€”. And I blame not the greed on Wall Street so much, because we expect people on Wall Street to be greedy, and especially if they’re playing by the rules, to take advantage. But we have hired, through our elections, people in Washington and Congress and the White House who are supposed to be protecting our interests, and instead they’ve been betraying us every single day, as they’ve been the lap dogs for the financial industry.

JAY: Well, how do you assess, then, Dodd-Frank and whatever regulations have actually come out of Dodd-Frank? What do you make of those efforts?

ANDERSON: Well, I think it’s a good first step, obviously, but it’s in a sense window dressing. Why have we not brought back Glass-Steagall? Why do we allow there to be any banks that are considered too large to fail? That’s the whole problem is they know that they can engage in these very risky, sometimes illegal, sometimes fraudulent activities and there’s not going to be accountability. How do they get to that point? Well, they give more, for instance, to President Obama’s campaign than ever before in the history of this country, and so the Obama administration, they have not prosecuted one person for the illegal conduct that helped lead to our economic disaster, from which people are still reeling in this country.

How is it that Goldman Sachs can be selling to their customers these perverse products, and at the same time betting billions of dollars against them without disclosing that to their own customers, to their own clients, and nobody pays a penalty for that? How can they market these instruments with these toxic mortgages, mortgages that they had to have known would not be paying off? How do they market those as AAA investments, the lowest-risk investments possible? How do they do that? And then the bottom falls out and not one person brought to account. That’s a pretty good return on their investments [crosstalk]

JAY: Now, one of the things that’s been suggested by some of the economists we’ve been talking to is that there needs to be some wayâ€”an alternative form of banking, in other wordsâ€”that one ofâ€”the power of the banking sector on Wall Street is partly in their ability to, you know, as you say, finance political campaigns, and especially if you look at what happened at the Commodity Futures Trading Commission when they tried to develop position limits. The lobbying effort was about 100 to 1 pro-Wall Street lobbyists to reformers. And they bring to bear massive resources. So very little gets done, both in terms of legislation and regulation. And some people are suggesting what there needs to be is some form of public banking so that there isn’t this form of blackmail. You know, this too-big-to-fail is essentially blackmail: you don’t come bail us out, your economy will be destroyed. So what’s your sense of this proposal of some form of banking as a public utility?

ANDERSON: Well, I think there should be a people’s bank, in effect, where we’re not dependent on these large banks anymore. And I do think that theseâ€”any bank that’s considered too large to fail, that there ought to only be one thing that’s too large to fail, and that’s the American middle class. We should be breaking up these banks. Glass-Steagall should be put back into law so that you don’t have investment banks and lending banks and insurance companies all together, because thatâ€”without that, we would not have faced this economic crisis. And we owe it to the American people. Our government ought to be serving the public interest, rather than simply the interest of the folks at Goldman Sachs and the rest on Wall Street.

But what do we expect when the president of the United States has surrounded himself with these folks? He’s not surrounding himself with public advocates. He’s surrounding himself, in terms of policy, with these Goldman Sachs and other Wall Street folks who go through this revolving door in government. And so there is so much that we can do if our government, if Congress and the White House were really focused on the public interest.

The control of the Fed, for instance: why is it that the Federal Reserve can be basically under the table without disclosure, without congressional oversight, without congressional approval, be pushing out billions of dollars to the banks that are essentially controlling the Fed? It is the most corrupt system. Alan Greenspan going to Congress and saying publiclyâ€”and everybody treating him as if he was some kind of oracleâ€”encouraging people to go to adjustable-rate mortgages, and then almost immediately he starts raising interest rates. I think there were 17 increases in a row in the interest rates, so that people who were going out, following his advice, getting those adjustable-rate mortgages, were absolutely getting hosed, when the banks once again were cleaning up.

So we know of these problems. It’s time that we respond and that those who are elected to represent our interests start doing that. And we needâ€”at the very top, we need somebody in the White House that’s going to make this case very clear to the American people and create the political demands so that nobody in Congress can ever get away with doing what they’ve done in the past, where there will be a real political price to be paid for those who continue to serve as the lackeys for the financial institutions who have taken such gross advantage of deregulation at the detriment, to the detriment of the American people and so many other millions of people around the world.

JAY: Thanks very much for joining us, Rocky.

ANDERSON: Thanks so much.

Rocky Anderson is the presidential candidate and founder of the newly-formed Justice Party. Anderson served as Mayor of Salt Lake City, Utah for two terms, and he rose to nationwide prominence as a champion of several national and international causes, including climate protection, immigration reform, end to the wars in Afghanistan and Iraq, restorative criminal…