From the MOVE bombing to Freddie Gray, Africa discusses the continuity of state violence and the resistance of the oppressed.

From the MOVE bombing to Freddie Gray, Africa discusses the continuity of state violence and the resistance of the oppressed. 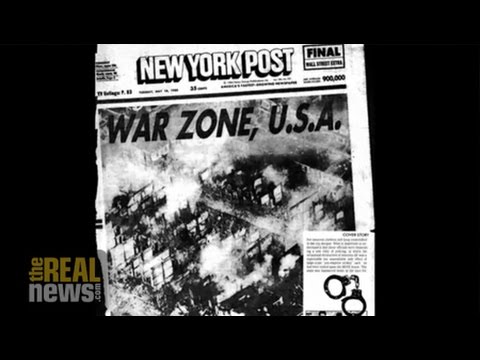 PROTESTER: If you want to be strong and have good food to eat, you can’t depend on the system. They give you Monsanto.

RAMONA AFRICA: I’m Ramona Africa, minister of communication for the MOVE organization. I’m also the sole adult survivor of the May 13, 1985 official government bombing and murder of innocent MOVE men, women, and babies. I am a former political prisoner as a result of surviving that massacre. I am a representative of the international concerned family and friends of Mumia Abu-Jamal. Most importantly, I’m a revolutionary.

TAYLOR JOHNSON, PHILLY FOR R.E.A.L. JUSTICE COALITION: Even though the city of Philadelphia will want to pretend this never happened, we know. And we will always remember, and their spirit will always live on, and we’re connected to that. I truly believe that.

AFRICA: I am here today because me and my family organized a commemoration program, a 30-year commemoration, of the bombing and murder of my family. This year it’s particularly important, mainly because of the epidemic of police murders across this country. MOVE have told people that their failure to stand up and speak out against the bombing and burning alive of babies would cause suffering. And it’s being manifested to this day.

JOHNSON: I think especially for younger people here in Philly, they need to understand that MOVE is directly connected to Freddie Gray. There’s always been a system that’s always positioned black people at the very bottom of the system.

AFRICA: We are our own liberators, our own saviors. And if we don’t stand up and do what’s necessary to protect and defend ourselves, to respect ourselves, how in the world can we expect or demand somebody else to respect us? We have to do this ourselves.

JOHNSON: State violence looks like a number of ways. It looks like police brutality, it looks like incarceration. All our brothers and sisters in poverty. It looks like people not being able to get a real apple. To have real food to sustain themselves. Can’t afford to feed their families. It looks like our, all of the schools are closing in Philly. That is all a form of violence.

AFRICA: We won’t back down. We fight back. We believe in the instinct, the principle of self defense, and nobody is going to convince us that that is wrong, that that is criminal.