Calls For Immigration Reform Ramp Up, But What Fuels Migration to U.S.? 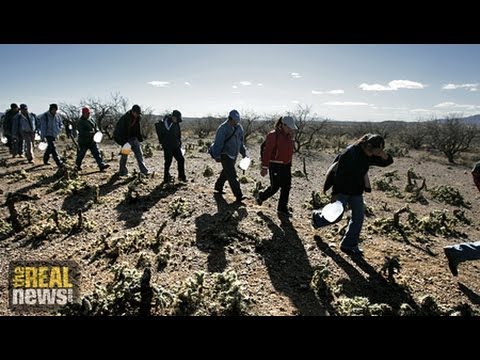 Immigration reform is back in the spotlight in Washington. President Obama renewed calls for Congress to act on comprehensive immigration reform. Immigration advocates are expected to carry out actions this week as well, to push for congressional action.

Now joining us to discuss why people are even coming to the United States to begin with is Peter Watt. He teaches Latin American studies at the University of Sheffield, and he is coauthor of the book Drug War Mexico: Politics, Violence and Neoliberalism in the New Narcoeconomy.

Thanks for joining us, Peter.

PETER WATT, LATIN AMERICAN STUDIES, UNIVERSITY OF SHEFFIELD: Thank you for having me.

DESVARIEUX: So, Peter, there are 11 million undocumented immigrants in the U.S., and about 6 million of them come from Mexico. Can you discuss what is really fueling this immigration to the United States?

WATT: Well, I suppose the principal thing that’s fueling it is the poverty in Mexico. And much of that has exacerbated in the last couple of–few decades, basically since 1982-ish, with the onset of the neoliberal reform program.

Mexico has undergone a series of economic crises since the 1980s, which correlates with the implementation of neoliberal reforms and globalization. So they’ve had the effect of pushing more and more people into poverty, which was accelerated again in 1994 when the NAFTA, the North American Free Trade Agreement, comes into force in Mexico. And that’s been deepening ever since then.

For example, the first six years of NAFTA, about 2 million Mexican farmers leave their land, unable to make a living from farming anymore, from small-time farming. There’s a huge kind of exodus from the countryside to the urban centers, and Mexico is one of the reasons why the cities, places like Mexico City and Guadalajara, get much bigger. Others go to the northern belt, where you have the maquiladora factories, the kind of sweatshops where you have a lot of especially young women, you have teenage girls working in the garment factories, the electronics factories.

And then, of course, people migrate towards the United States, and many of them cross the border illegally because it’s very difficult to do anything else. And, of course, the expectation when–Bill Clinton’s expectation when NAFTA is signed is that NAFTA is going to increase immigration. But nonetheless, there’s nothing in the agreement that really caters for that expected influx of people coming from Mexico. So that’s probably the main thing.

I mean, by now, well over half the population in Mexico lives below the poverty line, whichever way you define the poverty line. People are living in increased poverty, there’s heightened unemployment, and there’s increased instability, instability in the sense that the social protections and programs that once protected some of society’s most vulnerable has been removed by the imposition of this neoliberal economic program. And there’s also instability because of the terrible security crisis that’s now affecting Mexico.

WATT: Well, just–yeah. So we have this immigration from Mexico which has actually gone down significantly recently, probably as a result of the global recession, the fact that it’s more difficult to find even menial jobs in the United States. Many people are going back to Mexico, and many people are not endeavoring to try and cross the border illegally. It’s also become very dangerous, because as you say, the border’s becoming increasingly militarized. The effect of that is to push people further into rural areas and remote areas. And then, of course, they’re at risk of dying from thirst and hunger, or they’re exposed to the elements, getting lost.

Interestingly, after NAFTA, the U.S. government did institute this program called Operation Gatekeeper, which was a strengthening of the U.S.-Mexico border. And, of course, the immediate effect of that was that the deaths of migrants increased by about 500 percent. Militarization and strengthening of the border is also intensifying at the moment, despite the immigration reform.

So the militarization of the border, I think, serves a number of purposes. It intimidates potential migrants from crossing over. It has the effect of also separating families, because, as you probably know, Obama has deported more undocumented migrants than any other U.S. president. That’s had the effect of separating families, parents from their children, their U.S.-born children. It means that when they do want to come back to see their children, to the United States, it makes it pretty difficult.

But, yes, the militarization of the border also is serving as a pretext, I think, for something else. The militarization and the military aid to Mexico in the context of the drug war, I think, are also acting as a pretext to increase surveillance capacities, surveillance that’s conducted by both the Mexican and the U.S. agencies, but also by private security contractors and military contractors.

So the rhetoric of the militarization both of the border and within Mexico is also, I think, about protecting NAFTA, the deepening of NAFTA in a context in which many countries in the region are taking an independent course from the United States and acting in a way that suggests they’re no longer the backyard of the United States.

But Mexico and Colombia are staunch allies of the United States, and of course Obama is very keen to keep it that way. And in a country in which there is great disillusionment, people are feeling very disenfranchised and disillusioned with this neoliberal model, that’s potentially a very explosive situation that our fragmented and atomized social movements, were they to come together as a political force and coalesce, we could be–we could witness a kind of Mexican spring, in which a serious popular political opposition emerges, a thought that of course terrifies both the Mexican and U.S. elites, who wish to see a continuing of the status quo.

Peter Watt is a lecturer at the University of Sheffield in the UK and is currently working on a book about the political culture of Britain with his co-author, Jason Freeman.