Tea Party candidates strong desire to roll back New Deal comes out of the GOP establishment's own creation. Part 1 of extended interview

Tea Party candidates strong desire to roll back New Deal comes out of the GOP establishment's own creation. Part 1 of extended interview 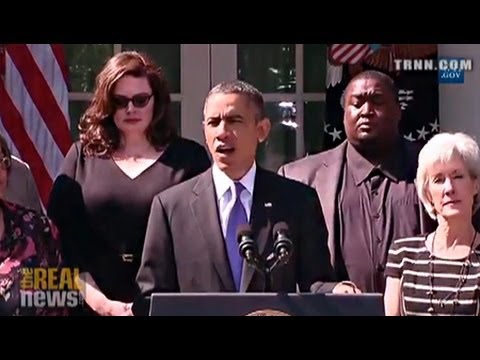 The federal government has officially shut down. That’s after House Republicans refused to drop demands that parts of Obamacare be delayed in return for approval of a mandatory government funding bill.

Let’s take a listen to what the president had to say.

DESVARIEUX: That faction of the Republican Party that the president is referring to is the Tea Party.

And with us to discuss the forces behind the shutdown and the rift happening in the Republican Party is Paul Street. He is a journalist and author of Crashing the Tea Party: Mass Media and the Campaign to Remake American Politics. And his next book is They Rule: The 1% v. Democracy, which will be released early next year.

PAUL STREET, AUTHOR AND JOURNALIST: You’re welcome. Thanks for having me.

DESVARIEUX: So, Paul, my first question is about the way the mass media has been portraying the shutdown. We essentially have a split happening within the Republican Party, and there seems to be this divide between, quote-unquote, pragmatic Republicans like the John McCains of the world and the ideological purists like Ted Cruz. What is really at the heart of this divide within the Republican Party? And can you give us a bit more context?

STREET: Well, you know, there are very real factions within the Republican Party, just as there are within the Democratic Party, and in fact as there are in other parties, including the Green Party and so forth. I don’t want to overdo them, however. And here I’m in some agreement with something you heard during the debt-ceiling crisis and also during this shutdown crisis. At the editorial board of The New York Times, they’re right to point out that it’s sometimes an exaggeration to say that the whole government is being held hostage, the nation’s politics is being held hostage just by a small faction called the Tea Party.

The vote two days ago to deny the continuing resolution, you know, to fund the government unless Obama care was repealed (you know, an incredible demand, right, to roll into a budget process) was 231 House votes in support of that. And that’s far more than the numbers of people in the Tea Party Caucus, which I think is about 45, 50 at the most. [incompr.] pretty much a straight-line party vote. The vote yesterday to deny continuing resolution unless Obamacare was delayed for one year was 228 votes–again, much bigger. And this was also true during the debt ceiling crisis. It was pretty much a rump vote of a much broader right-wing House Republican group that’s much larger than just the Tea Party phenomenon.

We forget how far to the right–admittedly, what the Tea Party–very much in sort of the shock troop vanguard ever since 2009–but how far to the right the Republican Party–and in fact the whole party system in this country–has been moving over the last three decades plus of neoliberal politics in the United States. There was a government shutdown in the mid 1990s carried out by Tom DeLay and Newt Gingrich. They didn’t call themselves Tea Party. In many ways they might as well have. I’ve been calling the Republicans half jokingly for the last few years the Teapublicans.

That said, there is no doubt that the Republican right in the age of Obama, [incompr.] to some extent before that, in its desire to roll back what’s left of the welfare state, what’s left of the New Deal, and back in the Reagan era, in order to crush what was left of the New Deal era, did call, has called into being an almost Frankenstein-like monster in the form of Fox News, a far right-wing talk radio network, and has really created a kind of almost frothing constituency in these very tightly gerrymandered, often rural, white congressional districts.

DESVARIEUX: Can you speak to any specifics, Paul?

STREET: And these people seem to have gone just completely off of the reservation. And it’s gotten to the point that the big capitalist elites that called them into being are now sort of horrified of them. And you see The Wall Street Journal in particular, and some of the old-line more centrist type of Republicans like John McCain and Senator Corker from Tennessee, calling them “wacko birds” and being horrified by them. But, you know, the GOP establishment created all of this in many ways.

DESVARIEUX: What do you mean by that when you say the GOP establishment created them in many ways?

STREET: It’s a lot of the standard right-wing political money and groups, the Koch brothers that were behind the Gingrich and the DeLay phenomenon in the 1990s and were behind the Reagan revolution, a lot of the same institutions, the American Enterprise Institute, FreedomWorks, and a broad panoply of groups that funded the Tea Party phenomenon, this sort of fake social movement, which was really a top-down, corporate, right wing directed Astroturf movement really funded by traditional right-wing money, largely with fairly traditional electoral purposes in mind, fairly traditional, you know, with the basic mission of swinging–they were successful at swinging the 2010 midterm elections over to the right, to the GOP. And that’s how most of the Tea Party people that I interviewed in connection with my 2011 book Crashing the Tea Party conceptualized what their basic goal was. It was to un-elect Democrats and create a Republican majority in the House, a traditional objective.

In the process of doing that, however, they’ve really cultivated a group of people who are motivated by some pretty dark, almost proto-fascistic, certainly racist, what the American historian Richard Hofstadter called paranoid-style [incompr.] people who don’t seem to know where to stop and really are just sort of, you know, Ted Cruz stand your ground, who are willing to go all the way, you know, go to the wall to stop this horrific Obamacare, which they have been told by Fox News and Rush Limbaugh and the rest of the right-wing talk machine noise machine is some sort of incredible socialist government intervention in the health care system, which is, of course, completely preposterous, ’cause Obamacare is a fairly center-right corporate-friendly health care intervention. It was designed in part to head off the real social democratic and majority-supported health reform, which was single-payer.

DESVARIEUX: Okay. Well, let’s continue this conversation in part two of this interview, and we’ll discuss more about who’s really behind the Tea Party and if we’re seeing a split happening between the elite factions of society. So let’s have you back on. But thank you very much for being on, Paul.

And we’ll check in with you guys later on when you can watch part two of this conversation. Thank you for watching The Real News Network.