Progressive Muslims Make Their Mark on the Midterms

At the victory rally for Alexandria Ocasio-Cortez, members of the group Muslims for Progress discuss their organizing efforts in the 2018 midterms, which saw the historic election of two Muslim-American women to Congress

At the victory rally for Alexandria Ocasio-Cortez, members of the group Muslims for Progress discuss their organizing efforts in the 2018 midterms, which saw the historic election of two Muslim-American women to Congress 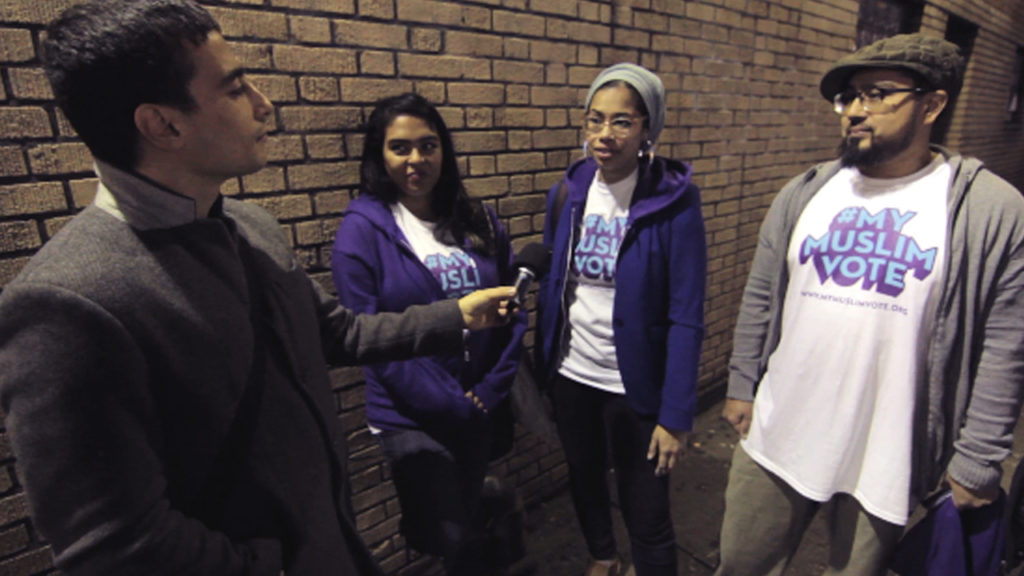 AARON MATE: We are at the victory party for Alexandria Ocasio-Cortez, and I’m here with members of a group that was one of the first two endorse her historic campaign, back when no one had heard of Alexandria Ocasio-Cortez, before it became this nationally-watched race. So Muslims for Progress, you guys jumped on board early. How does it feel now to see her become the youngest female elected to Congress?

MUSLIMS FOR PROGRESS ORGANIZER 1: It’s incredible. Who knew it was going to be this historic? But we had faith in her from the get-go. She came to speak at one of our first events. We kind of came to be- he’s our founder- right after the 2016 elections, and we had a fundraiser at which Alexandria came to speak. So we believed in her right from the get-go.

AARON MATE: What was attractive to you about her campaign?

MUSLIMS FOR PROGRESS ORGANIZER 2: I mean, she has a clear message. She wasn’t muddy about what she wanted to get across. And she’s captivating. She’s got a message, she’s got a lot of charisma. And it was it was just extremely compelling. And it was- at that moment it felt like exactly what we needed to hear. And a lot of people were drawn to that.

AARON MATE: So you gave the endorsement. How did you get involved in the campaign? Did you take part in canvassing?

MUSLIMS FOR PROGRESS ORGANIZER 3: So one of our members, Naureen Akhter, she’s like, was very involved with the canvassing, and she’s actually now, I think, the director of organizing right now. So our group has been supporting her. A lot of Muslims live in this district that Ocasio represents. So we wanted to make sure that for the Muslim population that we were supporting the right candidate. And Ocasio definitely had the better message, and she seemed more genuine than the other candidates.

AARON MATE: Let me ask you- in terms of results tonight, we had the first ever Muslim-American woman elected to Congress in Michigan. Your response to that vote?

MUSLIMS FOR PROGRESS ORGANIZER 2: So encouraging. So inspiring. It’s just incredible. It just means so much to see somebody that looks like you.

MUSLIMS FOR PROGRESS ORGANIZER 4: Yeah. First covering, head covering. Yeah. We’re just learning about the politics stuff. Like I say, I was a registered Republican in Pennsylvania until this year. So I have no idea what [crosstalk].

AARON MATE: What attracted you about the Republican Party? What led you to change your mind?

MUSLIMS FOR PROGRESS ORGANIZER 4: I mean, this is not the Republican Party anymore. Everybody knows that. This is the Trump party. And it’s just, it’s got nothing to do with fiscal conservatism. It’s got a lot to do with white nationalism these days.

AARON MATE: Overall, what are your thoughts on this election season has meant when it comes to getting people involved in politics, especially those who previously maybe have not been inspired to be political?

MUSLIMS FOR PROGRESS ORGANIZER 2: Yeah. I mean, all of us, we are, case in point, Exhibit A, we were political novices before 2016. Once that rolled around it completely motivated us and gave us new reason to start paying attention and not sitting on the sidelines anymore. It’s really encouraging to see that, you know, just the growing, the movement that’s building. And in the second generation, the younger kids. Just, I saw so many people, younger people at the polls today. And it’s so energizing and so, so positive. I feel so much more positive now than I did after the 2016 election.

MUSLIMS FOR PROGRESS ORGANIZER 1: When our group came to be- I mean, we’re just a bunch of friends that are professionals and parents, actually, and we are mostly in the tech and health care industry, and no background in politics whatsoever. But after the 2016 elections, like most people, like so many people around us, we just couldn’t sit still anymore. And so a few of our members really rallied under [name inaudible] leadership to get together and do what we can, really, really grassroots level. So for example, for AOC, but you also asked about other candidates, our group actually does endorse several candidates, mostly across Long Island because most of our membership is based out of Long Island, and some in Queens. So we’re rallying behind Liuba Grechen Shirley. We all canvassed last night. We all phone banked last night for Jim [Gordon]. So we’re doing what we can for who we can and who we believe in, and we’re seeing that it’s really, it’s really possible, from really the local and hyper-local levels.

Why are People Talking About Socialism? – with Paul Jay

Can a Progressive Democrat Win in Trump Country PA?