The US military has increased the frequency of drone attacks inside Pakistani territory, resulting in high numbers of civilian casualties. Though Obama was the first to call for these kinds of operations within Pakistani borders, Dr. Amin-Khan believes that Obama is more likely to change this failed policy than is McCain. Obama provides the potential for a broader approach to easing tensions in the region than the military-only approach, embraced by Bush and McCain, that has only made things worse. Identifying the lack of economic development as the greatest source of the conflict, Dr. Amin-Khan believes that the only US policy which can realistically improve the situation in Pakistan is a new Marshall Plan.

The US military has increased the frequency of drone attacks inside Pakistani territory, resulting in high numbers of civilian casualties. Though Obama was the first to call for these kinds of operations within Pakistani borders, Dr. Amin-Khan believes that Obama is more likely to change this failed policy than is McCain. Obama provides the potential for a broader approach to easing tensions in the region than the military-only approach, embraced by Bush and McCain, that has only made things worse. Identifying the lack of economic development as the greatest source of the conflict, Dr. Amin-Khan believes that the only US policy which can realistically improve the situation in Pakistan is a new Marshall Plan. 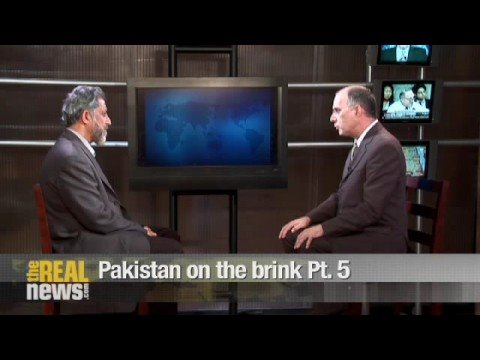 Pakistan on the brink, Pt. 5

PAUL JAY, SENIOR EDITOR: Thank you for joining us for the next in our series of interviews with Dr. Tariq Amin-Khan, a professor of politics and administration at Ryerson University. Thanks for joining us, Tariq.

JAY: Much can happen between now and the inauguration of the next American president. This next seven or eight months, we could see a dictator named Zardari, we could see the fall of Zardari. But if you look at Obama and McCain and their policy towards Afghanistan, Pakistan, and the region in general, how do you assess the two? And do you see differences?

AMIN-KHAN: I think there are some differences. If McCain comes to power, I don’t think there’ll be much change in the existing strategy that Bush has. So I think it’ll be more of the same.

JAY: "More of the same" meaning what, exactly?

JAY: And the other part of this policy is the establishment of pretty serious American bases in Afghanistan, long-term bases.

AMIN-KHAN: Absolutely. I mean, in fact, even in Pakistan. They already have two military bases in Pakistan, which not too many people know about, and they may strengthen those bases. So, yes, I would say that in that—.

JAY: Now, are those bases involved in any way in what’s going on in the North-West Frontier Provinces [sic]?

AMIN-KHAN: Not now, or not yet, but they were regularly used to launch the attacks on Afghanistan when the Americans first occupied Afghanistan.

JAY: And what do you make of Obama’s policy? Obama’s kind of made his issue Afghan is the right war, Iraq was the wrong war.

AMIN-KHAN: Right. But I hope Obama has learned his lesson, because he was the person who originally talked about unilateral military action in Pakistan if they had credible evidence.

JAY: Yeah, they said if they had credible evidence of a high-level target and the Pakistanis wouldn’t hit it, then Obama was in favor of the Americans hitting it themselves, something Bush is now doing.

AMIN-KHAN: Right. And look at the consequences. They haven’t been able to get their high-level target. In fact, they have really killed a lot of civilians instead and angered the entire country. So if Obama wants to continue that policy, I think it’ll be a grave mistake. But I also feel that maybe that was a political move on Obama’s part, given that he was being cornered in terms of how he is passive about Iran, etcetera. So maybe he saw this as an opportunity, and I hope that’s what it was. So if he comes to power, hopefully, he will try to look at whether the military option is the only option and whether he needs to look into other areas to go into.

JAY: Bill Clinton ran as the man from Hope. But if you talk to the number of people who hope Obama has such-and-such a position, it’s looking like Obama may be the man from Hope. But at any rate, people do argue that in terms of Obama compared to McCain, that McCain’s general framework is one of military solutions, period. He’s surrounded himself with people like James Woolsey, former head of the CIA, and Randy Scheunemann, who’s a well-known advocate of projection of US military power. In terms of just the general framework of policy, is there a significant difference? And then, if so, how would that express itself, do you think?

AMIN-KHAN: Given that the US has used its might in Iraq and it has done everything possible and yet it has not been able to contain Iraq, I feel that American military weaknesses are now becoming apparent to the people in the world. They do feel that America can be confronted. So I think America is really doing a big disservice to itself by continuing that policy. I think it needs to look at other alternatives and it’s in their interest to look at other alternatives, but it seems like that’s not where things are going. They still feel that the military option is the only option.

JAY: The issue of economic reconstruction—there seems to be very little of it going on. We’ve seen Joe Biden talked at one point less than a year ago about a massive infusion of funds towards the Pakistani school system to sort of break the hold of the madrasas in Pakistan. We’ve heard other kinds of proposals on reconstruction in Afghanistan. Do you think it’s a question of the election politics and there’s really more of this kind of policy to come out of an Obama-Biden administration? Or are they going to be locked into actually just putting more troops on the ground and a continuation of what we see now?

AMIN-KHAN: I think one needs to really back up their words with action. So, for instance, if there isn’t resources committed to this kind of work, that is, reconstruction work, then no matter what you might say, it’ll never happen. And there doesn’t seem to be that will to actually commit some money. More recently, the US has talked about, you know, putting more money, maybe a few billion dollars, into social development and education development in Pakistan. Let’s see. I still have my doubts. I don’t see—.

JAY: Particularly in this economic climate.

AMIN-KHAN: Exactly. Exactly. So I do think that unless, really, resources at the level of the Marshall Plan are committed in Afghanistan, things are not going to change.

JAY: I mean, there’s certainly the wealth in America to do it. After World War II, after America had spent an enormous piece of its GDP on the war, there still was money for the Marshall Plan. I guess it’s called taxation. And whether they rediscover it or not will, I guess, have a lot to do with how these things play out. Thank you very much for joining us for this series of interviews, and I hope we do it again soon.

AMIN-KHAN: It’s been my pleasure.

JAY: And thank you for joining us. If you like these interviews and would like to see more like this, then either over my shoulder here or over there in the corner you can click "Donate." Thank you again.