What do the Taliban want in Pakistan?

The US military has increased the frequency of drone attacks inside Pakistani territory, resulting in high numbers of civilian casualties. Furthermore, they have been accused of conducting special operation missions within Pakistan, the Pakistani military even stating that they fired warning shots at a US helicopter found flying inside the border. The US denies this claim. Dr. Amin-Khan discusses how neither the US nor the Pakistani government can hope for success in defeating the Taliban through military action alone.

The US military has increased the frequency of drone attacks inside Pakistani territory, resulting in high numbers of civilian casualties. Furthermore, they have been accused of conducting special operation missions within Pakistan, the Pakistani military even stating that they fired warning shots at a US helicopter found flying inside the border. The US denies this claim. Dr. Amin-Khan discusses how neither the US nor the Pakistani government can hope for success in defeating the Taliban through military action alone. 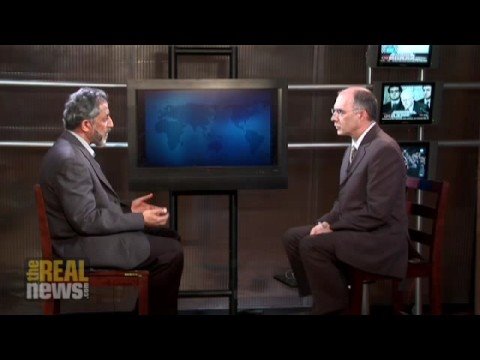 Pakistan on the brink Pt. 4

PAUL JAY, SENIOR EDITOR, TRNN: Thank you for joining us for the next segment of our series of interviews with Dr. Tariq Amin-Khan, a professor of politics and public administration at Ryerson University. Thanks for joining us again, Tariq.

JAY: Tariq, it seems to me, from looking at it from comfortable North America, that what we’re looking at in Pakistan is Pakistan as it was, just without Musharraf we have Zardari. We have the Taliban and al-Qaeda forces seeming deliberately wanting to push the Pakistani state towards a new martial law, and Zardari and the army maybe not minding so much that kind of power. And, first, do you think that that’s true? And if so, where does this lead?

AMIN-KHAN: It does appear to be so, but I would say that they don’t really need a martial law as such, because Zardari really has absolute power in my view, and I think the military is more or less supporting him for now. So in that sense, you know, they are accomplishing what a martial law would have accomplished. But I do think that the stepped-up attacks that are taking place under the present regime were really not the case when Musharraf was around. So this is not in anything in support of Musharraf.

JAY: The situation is even more polarized now.

AMIN-KHAN: I think the agenda of the Taliban is very clear. They do want sharia to be established in their specific areas. In fact, they would like the entire Pakistan to be a state that enforces sharia. Of course, that’s not happening, so what they are now demanding is at least in those areas—.

JAY: Let’s just make clear for the audience that—when you say sharia, explain what you mean by that.

AMIN-KHAN: By sharia that, you know, the strict Islamic edicts—and, again, there are all kinds of different views about sharia. But the Taliban—.

JAY: But something close to what the Taliban had when they were the government of Afghanistan.

AMIN-KHAN: Something like that. And that, of course, is a very, very narrow view of sharia, because sharia has been broadly interpreted by other Muslim scholars. But, of course, in the case of Taliban and the Mujahideen before them in Afghanistan, they were really—I mean, it’s basically an anti-women agenda, what they are trying to do.

AMIN-KHAN: Well, they don’t really have sharia law. They’re trying to, and they impose it from time to time, they do high-handed actions such as burning video shops, burning down girls’ schools, you know, doing things like that, but they really don’t have control of the population, because the population itself is also not supporting the Taliban. They at one time did, but given their actions, given their recent actions in the urban centers in attacking innocent civilians, they have actually turned against them.

JAY: So is part of the strategy to get the Pakistani government to use even more brutal incursions in the tribal areas, and in some way that then increases support for the Taliban?

AMIN-KHAN: Yes, I think that does. And that’s why I think the people are also warning the government not to do that. They are suggesting that there can be other ways that can be adopted to achieve same ends. That is, for instance, there has been, historically, the jirga system, which is a tribal council that has been there. But, you know, that has been basically done away with, given that the Pakistani state wants to establish a so-called writ that they always talk about. And that shift has really hurt relations, you know, within the Frontier Province. So first I think that the establishment of the jirga in those areas where they can hold them should be done. They should be trying to negotiate with the Taliban in trying to come to some kind of a ceasefire and stopping those attacks on the civilian population. And I think, having achieved that, if they achieve that, which is going to be a huge step—I don’t think it’s easily done, but nonetheless, if that is a step forward, then I think they can talk about about or discuss a strategy of how to then contain the Taliban.

AMIN-KHAN: Within Pakistan and within those specific areas.

JAY: But the other side of this—and this is partly where the American pressure’s coming from—is that these are reliable rear bases for the Taliban fighting in Afghanistan. And the situation’s spiraling, we’re told, more and more out of the control of American and NATO forces in Afghanistan. Their supply lines coming through Pakistan are being cut. The Taliban have a safe place to retreat to. So from the American point of view and NATO point of view, the problem’s more an Afghan problem than a Pakistan problem. But do the Pakistanis’ government and military care all that much about this part of it?

AMIN-KHAN: I think the military has been concerned more recently about the infiltration from the Pakistani side into Afghanistan. But the reverse of this is that let’s suppose that the Americans are correct, and let’s suppose that they feel that the only way to deal with it is to enter Pakistan and attack the Taliban. If they do that, the entire country is going to rise up against the Americans. This is something that they need to be extremely careful about. It’s not going to be then just a Pakistani-NATO issue; it’ll become a regional issue.

JAY: Which is why the Americans say to the Pakistanis, "If we can’t do it, you’d better bite the bullet and go do it. Otherwise you leave us no choice but to do it." This is Americans—.

AMIN-KHAN: And it looks like that the Pakistani state is willing to do it. But as I said, I don’t think that is also the answer, because that is not going to contain the Taliban. You know, it’s a rough terrain; they can hide, you know, in those mountains; they can live for days; they’re people who live on those mountains and support themselves. I don’t see how the Taliban cannot do the same thing. So it’s extremely difficult to militarily try to quell this uprising.

JAY: So if you got a phone call from the next president of the United States at three in the morning—’cause that seems to be the only time anyone phones anyone when it has to do with geopolitics. In fact, they should have a special phone card rate, a 3:00-a.m. geopolitical phone call rate. What would you say? What would be a rational US policy towards this Taliban situation?

AMIN-KHAN: Okay. If I’m so unlucky to get this call, I would advise—.

JAY: You can always refuse the charges if it’s collect [inaudible]

AMIN-KHAN: Right. Yeah. So, you know, I would suggest that the US needs to look at its strategy in that area very, very carefully. It needs to look at this whole war on terror, because the war on terror really has other purposes beyond just quelling or containing the Taliban, because I think it is about energy resources. It is about energy resources of Central Asia coming into the warm waters of the Indian Ocean. And where can they come from? Only through Afghanistan and Pakistan. So I think those are the issues. So let’s try to discuss those issues. I mean, if those are Americans’ fears and American concerns, let’s try to see how that can be better organized, and not through a military action. They have suffered badly in Iraq [inaudible] the US, and I think they’ve learned some lessons. Hopefully they can use those same lessons in Afghanistan, but it looks like those lessons are not being observed in Afghanistan. You know, the stepped-up attacks from the Taliban against the military forces, NATO forces, has really increased. So I don’t see how getting more boots on the ground is really going to contain this. You know, guerrilla warfare today is very, very difficult to contain by a standing army.

JAY: I made a film in Afghanistan. I was there for five or six weeks in 2002. And all I heard from everyone was, "We want the militias disarmed on all sides. We want our kids to go to school. We want to be able to eat and live." I mean, all the demands were not political, were not ideological. They were all about just having a life one could depend on. And the issue of economic reform is all anyone really wanted. But we hear so little about it.

AMIN-KHAN: Exactly, and I think this is where the attention needs to focus. If we are talking about solutions, I think one needs to recognize you can’t do away with the military. The military presence has to be there in order to, you know, maintain it as a threat. But I think, alongside, a huge other series of actions need to take place. Education needs to be, you know, diversified; it needs to be available to every person or every child in the country. You know, people need to address their economic issues. The, you know, wheat, rice, and the vegetables are so expensive that they’re out of reach of most people. Meat is probably had once a month by most people. So, you know, these everyday issues need to be addressed. And if the government starts addressing that, I see that as a tall order for the government in Pakistan, because the government is still wedded to a very neoliberal ideology. They feel that privatization is the way to go, and they have been privatizing fine, very-well-running—.