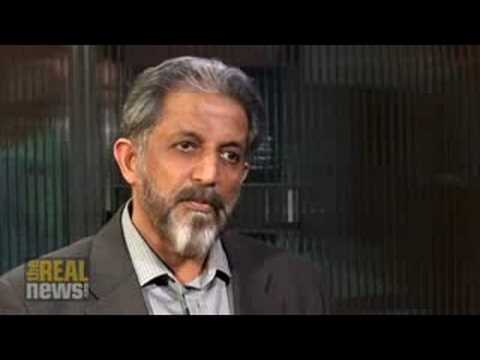 Pakistan on the brink Pt. 2

PAUL JAY, SENIOR EDITOR, TRNN: Welcome back to our series of interviews with Dr. Tariq Amin-Khan, professor of politics and public administration at Ryerson University. Dr. Khan has written many articles on Pakistani politics and is currently working on political Islam. Thank you for joining us again, Tariq.

JAY: Tariq, the day the hotel, the Marriott Hotel, was blown up, that day, President Zardari was expected to be at the hotel, didn’t show up, and of course whenever there’s a big terrorist attack, there has to be equal amount of conspiracy theories, and obviously bombing is a conspiracy, so why wouldn’t there be theories? But Zardari’s at the center of another major controversy. President Musharraf had accumulated a great deal of power as president, and people had hoped, expected Zardari to give up some of those powers. Where is that debate at?

AMIN-KHAN: That debate is ongoing in the country. People are asking that Zardari should actually rescind the Seventeenth Amendment of the Constitution.

JAY: And this is the amendment—explain to us what powers Musharraf received through that amendment.

AMIN-KHAN: Through that amendment, Musharraf had the power to dissolve the assemblies, both the National Assembly as well as the provincial assemblies. He also had the power to appoint the head of the military. Again, you know, two very important issues which the president has control of.

JAY: More or less the law, the legal framework for what was called a dictatorship.

AMIN-KHAN: Yes, absolutely. In fact, these powers were originally taken up by General Zia-ul-Haq, you know, way back in the ’80s. But then Nawaz Sharif, when he was in power earlier on, he actually was able to withdraw these powers from the president, from the presidency. But again in the 1990s Musharraf was able to, you know, put back those powers in the Constitution. So there has been an agreement between Peoples Party and Nawaz Sharif’s party that these powers need to be taken away immediately. So what Zardari does is, the minute he comes to power, he appoints a committee, and you know where committees will end up. So the issue is that there is—.

JAY: In other words, table it for some unknown date.

JAY: Now, when Musharraf resigned, and there was a civilian election, and there was a lot of talk in Washington about now democracy’s come back to Pakistan, do we hear anything from the Americans on the questions of Zardari’s powers?

AMIN-KHAN: No. They haven’t said a word about it. I think the Americans will be very happy if Zardari retains those powers, because then they can negotiate with him directly and they don’t need to go through the assemblies. So I think that’s something, yes, of course the Americans are happy with.

JAY: So the explosion at the Marriott helps or hurts Zardari’s case for power?

AMIN-KHAN: I think it helps. It helps in the sense that he can talk about how this explosion is really destabilizing Pakistan, and then his theory about civil war can also be, you know, played up. So, yes, of course this will help him. What is also interesting is that Zardari and his colleagues were supposed to attend a dinner at the Marriott at about the same time when the explosion happened, but they had intelligence that something is about to happen, and they therefore didn’t go out of the presidency or the prime minister’s compound.

JAY: The question would be asked, then, why didn’t they evacuate the Marriott?

AMIN-KHAN: Exactly. And, in fact, what people are now talking in Pakistan are two very important things. One is a statement by the minister of the interior, where he’s basically boasting how he was able to save both the prime minister as well as the president and all the parliamentarians from this attack because they didn’t go to the Marriott. One. The other is that given that such a huge tragedy has happened in Pakistan, the entire leadership is out of Islamabad or out of the country. So there isn’t a president; there isn’t a speaker of the assembly; there isn’t the president, as well as the chief of army staff.

JAY: Now, where are they?

AMIN-KHAN: The chief of army staff is in China; Zardari is in the US; the prime minister is out of Islamabad. And that again was something that the networks in Pakistan had taken note of, and they were very critical as, you know, this is where the country needs leadership and support, and there’s no one.

JAY: Now, Zardari had a reputation as being one of the more corrupt politicians in Pakistan now. Now that he’s the president, also, you know, through the death of his wife, assassination of his wife, around which there are many other conspiracy theories, can Zardari maintain this kind of power and some level of public support? And in the context of all this, you have people like General Mahsud calling for civil war against the Taliban. This is a very delicate situation.

AMIN-KHAN: I think he has a very small window. And if he can deliver at least something tangible within a very short period of time, then I think he will get that support. Otherwise I think his days are numbered, because he really has to do something about the issue of the Taliban. As I said earlier, a military solution is really not on the cards, so there has to be a mix of, you know, potential use of force along with some very rapid development in those areas, social development, economic development that needs to happen in those areas.

JAY: But are we seeing developing an army dictatorship without Musharraf, just through Zardari?

AMIN-KHAN: That’s quite conceivable. In fact, some people argue in Pakistan that this is what has been in the making. Zardari has very cleverly outflanked his opposition, he’s been able to outmaneuver Nawaz Sharif, and he’s—effectively the Peoples Party has their own president, they control the National Assembly, and they now control the judiciary because they also don’t want to appoint the former chief justice of the Supreme Court.

JAY: Which is one of the promises made during the election campaign.

JAY: And what is Zardari’s relationship with the army?

AMIN-KHAN: Right now I think that it isn’t very cozy, but I don’t think there is an element of distrust between them. So Zardari seems to be doing all the right things as far as the US is concerned, and the army is okay with it. And I don’t think Zardari is going to mistep as far as his relationship with the US is concerned. And that’s what I think the military’s concerned [about], that if that happens, then there might be a fallout. But—.

JAY: In the next segment of our interview, let’s talk about the crisis of democracy in terms of the interest of Zardari in the army. There was a people’s movement that more or less got rid of Musharraf. And what would it take to ignite that movement again? And then, number two, what’s going to happen to Pakistan in the context of a global economic meltdown? Pakistan, like everyone else is trying to figure out, just where is the world right now? Please join us for the next part of our interview with Dr. Amin-Khan.