One Year After Egyptian Revolution, Military Dictatorship Lives On 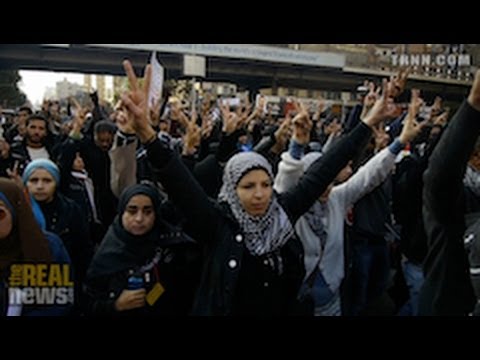 JIHAN HAFIZ, CAIRO CORRESPONDENT, TRNN: It’s been almost one year since Egyptians overthrew a 30-year dictatorship, but their anger has only intensified. These protesters say repression has only increased under the military junta that replaced Hosni Mubarak last February. The protest is part of a campaign known as Kaazeboonâ€”or liars in Arabicâ€”which seeks to expose crimes committed by state security forces. The Kaazeboon rallies encourage residents to join the fight against the military council. This march eventually culminates in a public screening of videos of abuses committed by the state, juxtaposed with commentary from the military council denying their crimes.

UNIDENTIFIED: The Kazeboon project is an awareness project to show people the acts of the military council largely absent from Egyptian state TV. And the majority of Egyptians tune in to this one source. State TV was against the Revolution, and until today is against the revolutionaries. Unfortunately, people listen to what they say.

HAFIZ: The Kazeboon marches have been attacked and screening locations destroyed by unknown assailants. Protesters say they are pro-government thugs. Women outnumber men at this Kaazeboon gathering. The organizers consider putting off the march to avoid endangering the women. But the women refuse, all of them determined to march.

HAFIZ: Along the way, stencil artists quietly slip away from the march to color the city’s walls with their political artwork. They must move quickly to avoid being detained by state security forces or attacked by thugs. Meanwhile, protesters leaflet through the traffic, calling on Egyptians to take to the streets again on January 25, this time not against Mubarak, but against the military regime that replaced him. As the march makes its way down the main boulevard,â€”

HAFIZ: â€”organizers decide to risk entering the adjacent neighborhoods. As expected, the march is suddenly attacked.

MARCHER: I was walking and saw them running. So I’m sure people ganged up on us like every time.

CHANTING: Thugs, go away, go away! You won’t make us forget why we’re here today!

MARCHER: They think we’re afraid. I want to tell them they are stupid because we get even more heated!

HAFIZ: But the violence only emboldens the protesters as they continue their march.

CHANTING: We’re not ruining, we’re not destroying! We’re the Revolution and our aim is to educate. All of you watching us pass, the revolutionaries aren’t thugs!

HAFIZ: Onlookers watch, photograph, and join the march as it roars through neighborhood. Kaazeboon has held screenings in cities all over the world. Kaazeboon is part of a project of Mosireen, a media collective at the forefront of the media war being waged by state media propaganda whitewashing crimes committed against Egyptians since the revolution.

LUBNA DARWISH, MEMBER OF MOSIREEN: We’re preparing for the 25th. We are basically providing trainings for people who usually do reporting from the streets, trying to get them better at, like, making videos and, like, using their cell phones and making short video, being able to edit their own video after it’s done; or how to react and, like, once there’s danger around you, how to do live streaming; basic training, just to prepare for that day. In November, actually, a few of the people in the Mosireen network wereâ€”I mean, their, like, cameras were confiscated and destroyed by the army to prevent them from taking videos of the army raiding Tahrir Square. So definitely, you know, Mosireen is in danger, but just like part of the Revolution. I mean, you can’t takeâ€”I mean, you can’t fight a revolution without risking something.

HAFIZ: However, despite documentation of violence against activists and protesters, not all Egyptians are convinced state security forces are the perpetrators.

CHANTING: The police, the army, and the people are all one hand!

MILITARY SUPPORTER: I am not taking money to say no, no military, we don’t want the military. No! We love military! We love [incompr.] Tantawi!

HAFIZ: Since the military council came to power after Mubarak’s ouster in February of last year, attacks against protesters have escalated. Month after month, Egyptians were attacked in Tahrir Square. Nearly a thousand people were killed and thousands more were injured by state security forces throughout 2011. Washington reaffirmed its support for the military junta’s so-called transition to democracy.

President Obama recently called and congratulated the field marshal for parliamentary elections, although human rights abuses have only worsened since Mubarak’s ouster and the handover to a civilian government remains ambiguous. Egypt’s deteriorating economic situation was also part of the conversation. IMF loans initially rejected by the military council due to public outcry against foreign loans and increased debts are now on the negotiating table, with both the military council and the country’s leading Islamist group, the Muslim Brotherhood.

The Muslim brotherhood was a major player in the January 25th Revolution. But since then, the organization cooperated with the military council, participating in elections and refusing to endorse street protests against the regime. They have reaped the benefit at the polls. The Brotherhood and the ultra-conservative Salafists took more than 70 percent of the Parliament, while secular parties won barely 20 percent of the vote. Offshoots of Mubarak’s National Democratic Party secured 4 percent of the seats, while the military council will appoint ten representatives. The elections were seen as a political victory for the Islamists, and also the ruling military council.

HAFIZ: Elections have not stopped the protests. Violence raged near Tahrir both before and after the first round of polling last month, leaving thousands injured and dozens killed. Ambiguous concessions by the military council to appease ongoing worker strikes and protests against their rule mean nothing for the families of Egypt’s countless martyrs.

MARCHER: We are going out on January 25, and the entire family has been protesting since last year. Since the start of the protests, all seven family members have been going out. Unfortunately, now there will only be six of us who will go out. The remaining six of us will go out. God willing, the martyr’s soul will be with us.

CHANTING: We will seek justice for the martyrs.

HAFIZ: Activists marked the last Friday before the January 25 anniversary with the March of Martyrs, in commemoration of those killed during and since the revolution. The march started from Giza, 10 miles from Tahrir Square, and made its way towards the downtown. Along the way, activists leafleted political literature, graffitied walls and encouraged Egyptians to join the march. After four hours of marching, hundreds streamed into Tahrir Square. They were welcomed by thousands.

However, not everyone is preparing to mark the Revolution with continued resistance to the government. The military council will hold an army celebration to mark the anniversary, claiming the Revolution as their victory, while the Islamists triumph over elections that brought them to power following the uprising.

As for those who fought and lost loved ones, they will take to the streets in hopes of convincing Egyptians the Revolution is far from over.

Jihan Hafiz for The Real News in Cairo, Egypt.