In recent years, the government has adopted the so-called Prawer Plan, reversing several earlier decisions to recognize unrecognized Bedouin villages in the Negev Desert. The new plan, explained by Association for Civil Rights in Israel lawyer Rawia Abu Rabia, will relocate 40,000 Bedouins in southern Israel for the establishment of 10 Jewish villages in their place. The Real News' Lia Tarachansky speaks with Haia Noach, Executive Director of the Forum for Co-existance in the Negev, and Salim Abu Kian, from Umm el Hiran, one of two villages (along with A Tir) slated for evacuation.

In recent years, the government has adopted the so-called Prawer Plan, reversing several earlier decisions to recognize unrecognized Bedouin villages in the Negev Desert. The new plan, explained by Association for Civil Rights in Israel lawyer Rawia Abu Rabia, will relocate 40,000 Bedouins in southern Israel for the establishment of 10 Jewish villages in their place. The Real News' Lia Tarachansky speaks with Haia Noach, Executive Director of the Forum for Co-existance in the Negev, and Salim Abu Kian, from Umm el Hiran, one of two villages (along with A Tir) slated for evacuation. 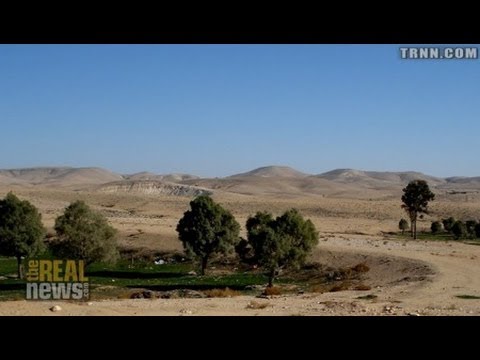 LIA TARACHANSKY, JOURNALIST, THE REAL NEWS NETWORK: The Negev Desert, Southern Israel. This vast, diverse landscape is at the forefront of the new fight for land in Israel. In recent years, millions were invested in bringing Jewish citizens to this part of the country, and moving non-Jewish citizens out. Over 200,000 Bedouins live here in seven municipalities and over thirty unrecognized villages. A new plan that involves multiple branches of government, semi-governmental bodies, and corporations is starting a campaign of demolition, displacement, and forced urbanization. Rawia Abu Rabia is a lawyer with the Association for Civil Rights in Israel. She explains the impact of this project.

TARACHANSKY: In previous stories, The Real News covered the village of Al Araqib where the Jewish National Fund, or JNF, a semi-governmental body in charge of forestry, demolished the village over thirty times to build the Ambassadorâ€™s Forest. Haia Noach is the director of the Negev Co-Existance Forum.

HAIA NOACH, EXECUTIVE DIRECTOR, NEGEV COEXISTENCE FORUM FOR CIVIL EQUALITY: This area was actually before â€™48 the house of thousands of Bedouin Arabs. Which most of them were expelled or driven away, or left the area in â€™48 and during the beginning of the 50s. We are in the midst of litigation process and still the JNF is working as [if] the land belongs to the state. Just changing all the ecology here, all the landscape as you can see.

TARACHANSKY: At the same time the JNF is building a new forest on the lands of Al Araqib, itâ€™s expanding the Yatir forest in the Northwestern Negev onto the lands of Um el Hiran. In a new promotional campaign with the Israeli airline El Al, the JNF promises to plant a tree for every plane ticket sold to expand the section of the forest it calls Hiran. But nowhere in the promotional material is it mentioned that the area on which the forest is to be planted is home to two Bedouin villages of the Al Gian family. This campaign, coordinated with the government, is propelling Umm el Hiran and A-Tir into the beginning of a similar fight to the one waged by Al Araqib. In November the government approved the demolition of dozens of the villagesâ€™ homes.

SALIM Al-KIAN, UMM EL HIRAN VILLAGE: The people who live here are not lowlives, really, you have school teachers here, and lawyers, managers, and engineers, all the people here are educated. They go to work, and come back to the village. In agriculture, we have no agriculture because we have no water. 60 years with no water. Electricity as you can see is all generator-powered, which is very expensive. But we have no choice. There are sick people and children here, we need the electricity.

TARACHANSKY: Why donâ€™t they recognize your village?

AL-KIAN: Because weâ€™re Bedouins, thereâ€™s no other answer.

TARACHANSKY: The JNF refused to comment on the case, saying only â€œThe JNF does not plant even one tree in an area under legal dispute,â€ This despite its clear plantation on the lands of Al Araqib, a case currently undecided in the courts.

TARACHANSKY: Before moving to this area in 1956, the Al Gian family, which populates the two villages was displaced four times by the nascent Jewish State, until under military rule, they were resettled here and promised it would be for the last time. Since, theyâ€™ve become citizens of Israel and serve in the in the Israeli army. On the same day Salimâ€™s son received his order to appear for army reserve duty, he also received a demolition notice for his home.

AL-KIAN: They promised us that this will be our place forever, and in the last ten years we see demolition orders. Nobody comes to you, nobody talks to you, they only place demolition orders, and destroy houses and uproot trees, and thereâ€™s no water, and no one to speak to. They tell you â€“ thereâ€™s water in Hura, as if I was born in Hura.

TARACHANSKY: Hura is a governmentâ€“constructed municipality near the villages. It is one of seven such towns the government wishes to relocate all Bedouins to. The process began in 2003 when the government commissioned the Goldberg report, seen by many in the field as a sign of hope.

ABU RABIA: It was seen as a sort of turning point, because before that the Bedouins were treated from a security perspective, and all of a sudden they were seen from a civilian perspective. Two general principles this committee outlined were, first that the unrecognized villages should be recognized as much as possible. The very use of the term â€œvillagesâ€ and not the governmentâ€™s usual term â€“ â€œspread,â€ and â€œinfiltratorsâ€ and all that rhetoric, and secondly, the committee recognized the Bedouins historic rights to their lands.

NOACH: The reason it changed, was a lot of pressure from the right-wing parties.

TARACHANSKY: What do you think it was that motivated the state, all of a sudden?

TARACHANSKY: It sounds like this is the new West Bank.

NOACH: Itâ€™sâ€¦ they are turning it intoâ€¦ into.. a fire zone. You know, they are putting tension. Last month there was a decision to build ten new villages near Arad, in the area of Arad. They build villages for the evacuees from the Gaza settlements, all the redeployment. People are coming here to the Negev.

TARACHANSKY: But when the report came out, the Prime Ministerâ€™s Office intervened, appointing Ehud Prawer to implement its recommendations. Prawer, the former deputy head of the National Security Council, reversed the trend of recognition set by the Goldberg report.

ABU RABIA: In his process, that lasted two years, there wasnâ€™t a single member who was Arab or Bedouin. A, he doesnâ€™t use the term â€œvillagesâ€, he goes back to â€œdispersion,â€ or â€œspreadâ€. His guiding principle is urbanization, returning to the idea of concentrating them in Beâ€™er Sheva or the Bedouin municipalities, or in the eleven townships of Abu Basma. And only in exceptional cases, establish a new village. This means uprooting roughly 40,000 Bedouins from their homes.

TARACHANSKY: The government explained its forced urbanization plan by saying it is unable to provide services to the 35 villages it refuses to recognize. However beside the encroaching JNF forest, in recent months a new plan was revealed for the establishment of ten small Jewish villages in the places from which the Bedouins are to be evicted.

ABU RABIA: When the planning authorities discussed the obejections the Bedouins raised to the urban plan of Beâ€™er Sheva, the committee appointed a researcher, to weigh their resistance.

TARACHANSKY: Was it Talma Duchan?

ABU RABIA: Talma Duchan. And she actually concluded that A-Tir and Umm el Hiran should be recognized, so the Prime Ministerâ€™s office intervened, reversing her decision to recognize the villages. Later it was revealed that it was for security considerations, they didnâ€™t want territorial contiguity between the occupied territories, the Hebron area, and A-Tir, Umm el Hiran which are close to the Green Line. And that was their deciding factor, and so they intervened. And if thatâ€™s not enough, just recently, the same government that says these villages canâ€™t be recognized for all kinds of reasons, decides to establish ten Jewish villages on this very place, where villages exist and people live.

TARACHANSKY: The realization of this plan was designed with the settlement movement at its heart. The plan was made clear in an interview with the former head of the Settlement Department at the World Zioinist Organization who outlined the creation of a contiguous Jewish bloc from the West Bank settlement of Susia to the Israeli town of Arad.

TARACHANSKY (Quoting Ofer Laufman, Former Head of the Settlement Department, World Zionist Congress): â€œThis is a flagship project for the department. A first rate Zionist mission for the establishment of a Zionist settlement bloc in a place nearly abandoned by the government for Jewish settlement. If it succeeds, it will be incredible.â€

TARACHANSKY: The Settlement department of the World Zionist Organization was created by the Jewish Agency with the distinct purpose of settling Israeli citizens beyond the Green Line, in violation of international law as the areas are militarily occupied since 1967. In 2002, then-Prime Minister, Ariel Sharon relegated the Galilee in the North and the Negev in the South as new frontiers for the department to settle. In 2008, settlers from the settlement of Susia were brought here to plant the seeds of a new Jewish village, Hiran, on the lands of Um el Hiran, following in the same way new outposts are build in the West Bank. Despite repeated attempts, the government ministry in charge of settling the Negev and Galilee refused an interview with The Real News. Iâ€™m Lia Tarachansky in Umm El Hiran, the Negev Desert.

Israeli parliament approved the deportation of 40,000 Bedouin from their land

March 5, 2012
Sign Up for Our Newsletter
Help Us Make Real News!