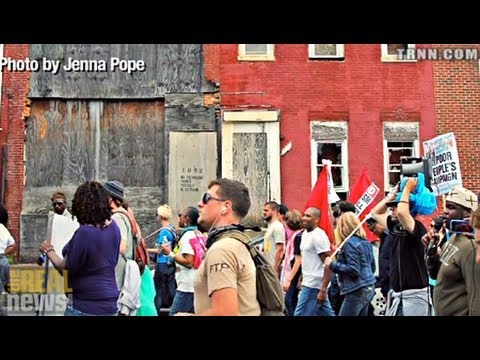 CORTLY “C.D.” WITHERSPOON, ORGANIZER, POOR PEOPLE’S CAMPAIGN: We’re here today because we know that some of the folks are looking for jobs and can’t find any, because the system isn’t creating any jobs. We’ve come out here today to say that we’re coming and we’re taking back our citizenship rights, we’re taking back our ability to be able to be a community.

NOOR: The march comes 45 years after the original Poor People’s Campaign that was organized by Dr. Martin Luther King Jr.

Among those taking part was Bob Ross, who took part in the original Poor People’s March in 1968 and is currently the president of the NAACP’s Prince George’s County Branch.

BOB ROSS, PRESIDENT, PRINCE GEORGE’S COUNTY NAACP: You know, 50 years–I’m 69 years old, and we’ve been doing this for 50 years. We went to the march on Washington for justice and peace, jobs. Fifty years later, what are we doing? Same thing.

NOOR: Poor People’s Campaign Organizer Andre Pall says they’re marching through disinvested communities in the Baltimore-D.C. corridor to continue the work of Dr. King. He was assassinated on April 4, 1968, a little more than a month before the march he organized was to take place.

ANDRE PALL, ORGANIZER, POOR PEOPLE’S CAMPAIGN: If you look around in this community, you see the boarded up houses, how dilapidated the area and the neighborhoods are. It’s very economically depressed in this neighborhood. So this is an attempt of the Poor People’s Campaign to reignite the issue. Corporations have gone hog wild in their quest for profits. When they do that, poor people get left out of the equation.

WITHERSPOON: What do we want?

WITHERSPOON: When do we want it?

NOOR: Along the way, marchers highlighted the conditions facing low-wage workers at big box chains who rarely pay a living wage and who routinely intimidate or fire workers who try to unionize their workplaces.

The march stopped at a Walmart store outside Baltimore Saturday afternoon. Police initially refused to allow the marchers into the parking lot, but yielded after a tense exchange which included shoving but no arrests.

Again, Bob Ross, who took part in the original Poor People’s March of 1968.

NOOR: Recently, low-wage workers in five cities across the country have taken strikes and conducted work stoppages to highlight their plight. On May 10, the day before the march started, up to 200 low-wage workers in Milwaukee also held series of actions calling for a living wage of $15 an hour and the right to unionize without intimidation.

The march culminated in Washington, D.C.’s Freedom Plaza, where marchers joined local activists as they demanded the the D.C. City Council pass the Large Retailer Accountability Act. It would require corporations operating D.C.-area stores 75,000 square feet or greater to pay employees a living wage of $11.75 per hour. Reverend Patricia Fears is with the nonprofit Faith Strategies.

REV. PATRICIA FEARS, FAITH STRATEGIES: There are so many people that come into our congregations week after week that are just looking for an opportunity to survive. It is absolutely sad to think that our elected officials could continue to take money from all of these large retailers without taking into account the people who are keeping them in office. And they just don’t see what’s going on here in the city. It’s a crying shame how a family can’t support itself off of the money that these retailers are making. They can’t afford to shop in their stores. They can’t afford to do anything.

So we need to really put our foot down and say, we can’t take this anymore. Enough is enough. There has to be a line in the sand, and this needs to be it.

FEARS: Well, I can tell you the evidence of that is shown every other week at our food pantry, where people who are working every single day still have to come to a food pantry in order to get food for their families. They’re working two and three jobs. They’re barely able to come in and just do the basic things that they want to do, which is worship. They want to spend some time with their children. And they can’t afford to do it. They’re spending what would–a normal person would say a 40-hour work week. Well, they’re doing double that, doing three or four jobs, going from one job to the next job, just trying to get the minimum–I’m not talking about anything extravagant; they’re looking for the minimum of a lifestyle. They’re just trying to spend some quality time with their family and do the right thing, and they can’t even afford to buy groceries, and it’s ridiculous.