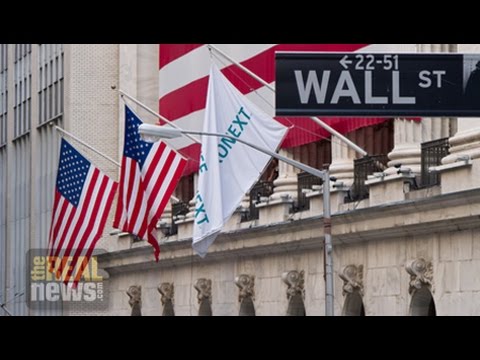 Bernie Sanders has promised that his election campaign, free college education for everybody in state and public colleges. And how’s he going to pay for all this? He says a transaction tax on Wall Street. Essentially, every time somebody buys and sells a stock they would pay some kind of a tax. And obviously this would affect high speed traders, and great big funds that move tons of money in and out of the stock market, far more than it would affect individual buyers and sellers who don’t do this all day long.

Now joining us to talk about how real is this tax, how practical, is it doable and could it really pay for free college for everybody, is Robert Pollin. Thanks for joining us, Bob.

ROBERT POLLIN: Thank you very much for having me, Paul.

JAY: So Bob is the co-director of the PERI Institute. He’s the author of Greening the Global Economy, a new book, and he’s told me it’s very important. Okay, I’m teasing, Bob, because we’ve known a long time. But in fact it is very important, and if it wasn’t we wouldn’t be doing a whole series about it.

So we’re going to talk about the transaction tax. So the knock on the transaction tax is that there, number one, there really isn’t that much money there, unless it’s more significant if the amount of the tax is significant. It’s going to be passed on into the public anyway, because the people who control these things will find a way that it doesn’t come out of their profits. Talk us through the whole logic of it.

POLLIN: The idea of the transaction tax is very simple. It is a sales tax. It’s like, if you go down the street and buy bubble gum you’re going to pay 6 percent, or whatever it is in your particular municipality or state. This is the equivalent in that every time there is a trade enacted for stocks, for bonds, or for derivatives–so you mentioned stocks, but actually as the tax that I designed, that Senator Sanders has picked up, it includes all trades.

JAY: And then–the Sanders campaign is actually, acts–is making use of the research you did. It’s actually a plan you helped develop.

POLLIN: Well, it was a bill that I helped to write for Congressman Keith Ellison called the Inclusive Prosperity Act. It was introduced three or four years ago. And Senator Sanders has adopted it. He’s calling it the Robin Hood tax. He introduced it as a Senate bill. So it’s the same thing. The tax rates are exactly the same.

POLLIN: The reason it’s so low on derivatives is because the, we are scaling the derivative tax to the so-called notional value of, of a derivative instrument. And I’ll explain what I mean.

JAY: Does that apply for, you know, if you’re speculating on–

POLLIN: Yeah. Yeah, you’re–you know, if you’re speculating on the movements of any kind of asset you don’t actually own the asset. You own the right to buy the asset, or to sell the asset. So that’s why it’s scaled much lower. And in fact, the critical thing when you measure these things is we want to know how much it actually costs to transact business in the first place, and that what we’re doing with the tax is adding to these so-called transaction costs already.

JAY: So I’m, I guess part of the argument Wall Street would make against this is we’re already paying tax. If we’re doing this personally, we pay income tax, we pay capital gains. If it’s corporate you pay corporate tax. Why should we, why should we get taxed on top of all the–.

POLLIN: Well, for one thing, I mean, we, you and I, everyone pays income tax. We pay sales tax when we go to buy things at stores, or over the internet. And in this case all financial market transactions are at present untaxed. So yes, there are other taxes, but this is a tax that would apply to trading in the same way that other kinds of trading. Other countries have the tax.

JAY: So the Sanders plan is not, then, is not so radical. There’s lots of capitalist countries–this is not some big socialist maneuver.

POLLIN: No. I mean, the great–the tax, you asked me about the tax rates. So the one-half percent rate that I proposed for, well, Sanders has picked up, is exactly the rate that is now operative in Great Britain and has been for a long time.

JAY: And how much money can, will you think this generates?

POLLIN: Well, if we add up the three taxes, and we look at the level of trading in the United States today, my estimate is that it’s in the range of $300 billion a year after, we assume, that trading falls by 50 percent. Now, that’s implausibly large decline in trade. There’s going to be a 50 percent contraction in–.

JAY: Why should there be any contraction?

POLLIN: Because you’re imposing a tax.

JAY: Even on big trades, it’s still not–.

POLLIN: Well, it’s not small relative to the level that they’re paying on–I mean, I think it’s appropriate level of added cost, but the key thing is to know how much they’re already paying on transactions costs. So if we look at the transactions cost and we say, okay, we’re adding 10, 15, 20 percent to transactions costs, that’s not negligible.

JAY: Well, how could you be adding that much? The numbers you gave were not in the range of 20 percent.

JAY: I mean, one of the things in terms of reducing the amount of trades is that high-frequency traders operate within such small margins, and they make money because they use so much, such enormous trades, you might see less high-frequency trade. But a lot of people think that wouldn’t be so bad.

JAY: Which most people, including many regulators, think would be a good thing, because you get these wild swings sometimes because of high-frequency trading.

JAY: Now, so what’s the big knock against this? I mean, it seems pretty straightforward.

POLLIN: The knock against it is–.

JAY: Oh, no, what a, what a unique thing there.

POLLIN: Yeah, yeah. We would never want to do that. But on–the other thing is if we take the argument that, you know, Wall Street is making a very important, positive contributions towards channeling money to productive investments in the economy to create jobs, then the argument is, well, you’re discouraging that. And you’re distorting the work that Wall Street does by establishing this tax that, you know, otherwise it wouldn’t be thinking about this tax, and they could make decisions based on which companies deserve to get money. That would be the–.

JAY: And not likely they would put it into free college education.

POLLIN: No. No. That would not be, you know, where the money would be going, not very likely. Yeah. And, I mean, the more fundamental point is, look, there’s, there’s almost no evidence showing that Wall Street trading has a positive impact on productive investment activity. It’s quite the opposite. It encourages short-termism, it encourages firms to worry more about their stock price than doing things to promote productive activity.

So that argument against the tax, I think, is not valid.

JAY: All right, thanks very much for joining us.